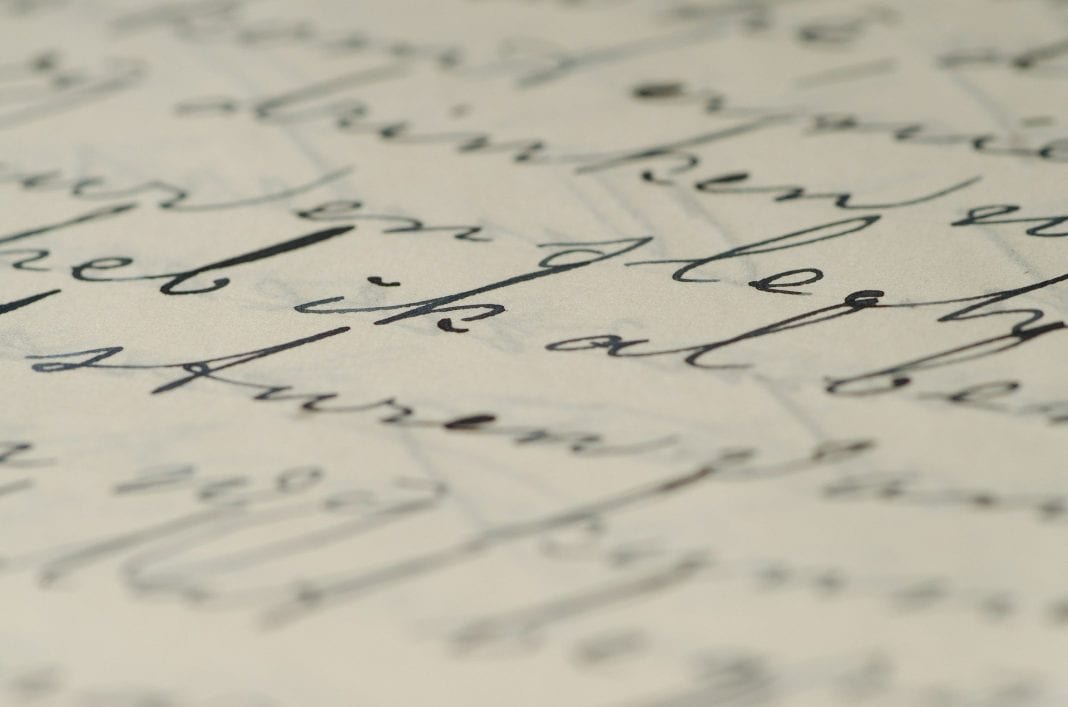 The loss of someone close is something that at some point we all will go through and struggle with. 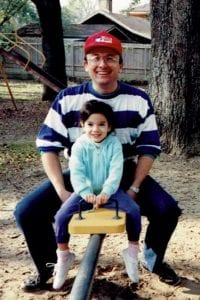 I’ve lost grandparents, family members, and friends. But the one loss that I was not prepared for at the age of 31 was my father.

I had joined the club. A club I never wanted to join.  The club of children who had suffered through parent loss. I’ve cried more tears this year than any previous year of my life, and I’ve had some serious ups and downs, all amid a pandemic (thanks “Rona). But the truth is, this loss that I endured has brought me closer to friends who are in the same club as me, The Parentless Child Club. (woooomp womp!)

Now… if you are in this club, have friends who are in this club, or sorry to say will be in this club one day, I’m here to tell you to hold onto things written in a loved one’s handwriting because you can create something that will mean the absolute world to one of our kind.

After my father passed and we were planning all of his arrangements, the funeral home offered a memorial piece that was a small charm with your loved one’s fingerprint engraved. I thought it was really cool honestly. I could have my dad’s fingerprint with me at all times. The fingerprint of the hand that held me through some highs and lows in life. We signed the papers that would allow the funeral home to collect his fingerprint and then I would order my necklace once we had finished everything else. ANNNNDDDDDD then they sent me the price of said necklace… WOAH! Sticker shock!!

I’m sorry you want HOW MUCH for a teeeeennnnnyyyyy tiny medal with MY father’s finger print engraved on it?! I quickly became frustrated with the funeral service business as a whole and decided I wasn’t going to pay the high dollar amount they wanted for a small charm.

A couple of weeks passed by and I started thinking about how badly I really wanted to make a piece of my own with my dad’s print. I put on my big girl panties and decided to email the funeral director we worked with. No lie, I was 100,000% ready for a fight to get a copy of the print, but for one time in 2020 luck was on my side. She told me no problem at all and sent me a digital copy of the print they had collected.

I looked over his print more times than I could count. I could see the nicks and cuts I knew oh so well from making, polishing, and cleaning jewelry at Adler’s. I could see all the little gaps that I had felt while holding his hand as a little girl. I could see his life in that print. At that moment, I knew exactly what it was that I wanted to do. 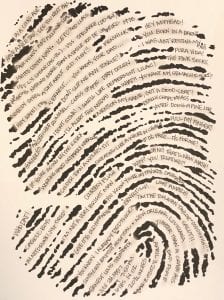 My dad had an OBSCENE amount of bad dad jokes….. we liked to call them “Ernie-isms”. They were soooooo bad! But they were my memories, and I have now begun to annoy my own children with them to carry on the tradition. I took all of these awful jokes and moments from his life and combined them into blurred out sections of his fingerprint. I made a piece that truly represents my dad more than any necklace charm ever could.

I still wasn’t fully satisfied however, I didn’t feel like I had a piece of him with me. I thought about it for quite a while and after talking to my stepmom, I found out that she had the print out of his final heartbeat from an ECG strip from the hospital the night he passed away. I thought some more and remembered that I had ONE card that my dad had actually signed himself. (Every card was signed by my stepmom as “Popie and Mimi Soup” or “Dad and Sue”) I figured out what I was going to do to carry a piece of him with me every day.

I scanned in the ECG strip and the card to my computer and combined the two. I now have a bracelet that I wear knowing I’m holding onto my dads last moment on earth, even though I couldn’t be there with him at the time (ugh, thanks covid). 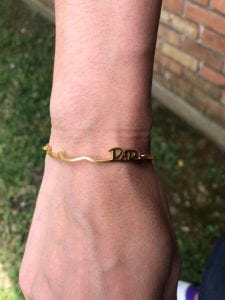 The other gift I could suggest is one that I gave to one of my closest friends.

Casie and I have been friends for 13+ years, or somewhere around there… I’m really not sure but somewhere around Summer 2007.  Her mom, Arlene, scared me more than my own mother did. There were many times that she punished both me and Casie for something ridiculous and also times where it was totally deserved. Example: We maybe, kinda…. ok, totally broke curfew a couple of hundred-ish times. Well, we would ALWAYS get caught in December. Why you ask?! Because Arlene had MOTION CENSORED SINGING AND DANCING SANTA PATH MARKERS!

YEP! We thought we were being sooooo slick and totally getting away with coming in late, then WHAM! “Haveeeeeee a hollllyyyyy jooolllyyyyyyy Christmas!” starts blasting across the front lawn while these mini Santas shake their groove thing and BAM! There stands Mama Arlene with the death stare in the doorway. We’d tuck our tails and hang our head as we walked past trying not to laugh and into Casie’s room and knew we wouldn’t be going anywhere for a few days. (P.S. If anyone can find these Santas, I may owe you my life, because I’ve searched for YEARS and they’re nowhere to be found.)

Arlene was a big part of my life. Casie has told me many times before, I am one of the few people who can still keep her mom alive for her. There are so many people scared to bring her up or talk about her that they just avoid the subject altogether.  This year though, I think I truly brought her back and gave my Case Face a gift that meant the world to her and helped her hold onto her mom’s memory.

We lost Arlene in September of 2009. My best friend was only 19 and her mom was gone. I was shocked and heartbroken.

It took me 11 years to figure out the gift that filled my heart for her.

Casie has 3 boys. (I pray for her daily and wonder how the hell she does it.) 3 beautiful little boys who are crazy busy, keep her on her toes, and make her more of a man that I could ever be because I would have lost my damn mind a LONG time ago. 3 boys who never got the chance to experience their amazingly extra, strict, over the top, FLASSSSSHHHYYYYY, and beautiful soul’d grandmother.

Throughout the past few years, I had Casie send me different things like recipes and notes that were all in her mom’s handwriting. I made sure they were handwritten, or my plan wouldn’t have worked!

I went through what felt like a million papers written in Arlene’s writing and pulled about 20 or so letters and letter combinations. I took the letters and combinations and pieced together the names of her 3 boys. Then topped it off with the ending of the very last note she ever wrote to Case that said “I love you with all of my heart,”

I uploaded the graphic to a company that prints blankets and combined my graphic with a flamingo (Arlene’s favorite and spirit animal) to make the best blanket for Casie and her boys.

I know for a fact that Arlene approved. I ordered this blanket in the beginning of August. Normal turn around time is about 3 weeks. We were going on 5 weeks and I checked the tracking on September 7th which said my expected delivery date was September 12th. September 8th marked the 11 year anniversary of her death, and the blanket was delivered first thing that day.

I couldn’t wait to give it to her so I pretty much forced her to come to my house or I was going to start tracking her car to find out her location. She was pretty terrified and didn’t know what to expect when I handed her the flamingo wrapped box. When she opened it and saw the hand writing she immediately shut the box and started to ugly cry, because she was seeing her kids names in that very familiar writing for the first time. 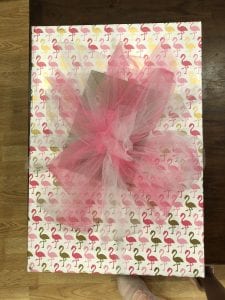 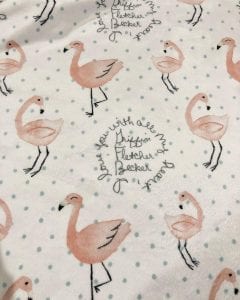 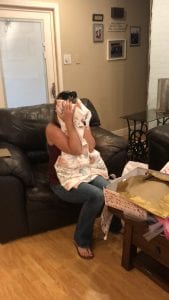 It is something that she uses daily to snuggle her babies with her and her mom. She feels like she has her mom holding her and her boys. One of my greatest joys about it is getting to see my terrible little dudes snuggled up with the gift that means so much to both Casie and me. It shows me the appreciation of the thought and work behind a gift that can’t be just store-bought. 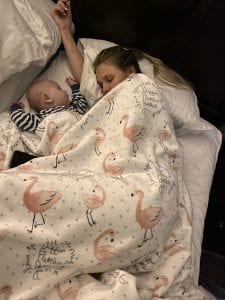 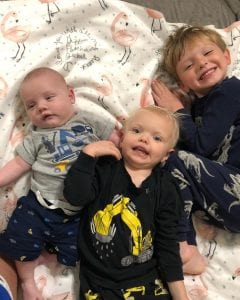 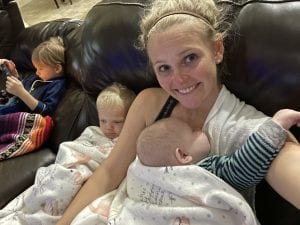 I guess the whole point is simply to say, loss is hard. Parent loss is awful. Grief is an ugly beast. Keep the memory of loved ones alive when you can by telling their corny jokes and stories you remember about them. Also, hold onto the little things, the cards, and the recipes. Keep the recipe written in the handwriting of someone near and dear to your heart over the typed one. Don’t just toss out the birthday card or the little I love you note. You never know when you might need that little piece of them in the future or what can be created with something so small that will become one of the most cherished items you possess.  Also if you have read this far – call your parents right now and tell them you love them.  Better yet drive over, give them a hug for no reason at all.  I promise you will never regret that you did.

Life’s a Hitch :: The Life of an Oilfield Wife