My husband gently asks me sometimes. He doesn’t understand, and frankly I don’t fully understand either. Sometimes I think things are sexist when the “guy doesn’t mean anything by it.” Sometimes I feel violated when a man makes it known that he is interested in me, and other times I feel flattered. I can tell when someone is genuine and respects me, and I can tell when they see me as a piece of flesh to devour. Sometimes I find myself getting furious when I talk about the state of our society and how we treat women.

Our world also tells boys that girls are sex objects first, human beings second. I see it in the way boys and girls are portrayed on TV shows. On children’s TV shows, no less! The girls always appear thin, made-up and put together where the boys are muuuuuch more casual. In many shows on television, the mom is thin, fit and hot while the dad has a huge gut and doesn’t look like he takes care of himself half as much as the female does. That kind of thing makes me mad. It doesn’t show two normal, tired, aging parents. It shows one. A normal guy and an extra attractive mom. Why? Why can’t moms on TV be normal? Why can’t we celebrate “mom bods?”

That honestly isn’t even the point of this writing. I’m just so mad. And I am finally figuring out why.

I just found out there is a public school rule which states girls are not allowed to say no if a boy, any boy, asks them to dance at the upcoming Valentine’s Day dance.

That’s a rule. A real live, existing rule at an elementary school in Utah. According to the story, 6th grade girls at a Utah Elementary school are not allowed to say no if a boy asks them to dance. The premise, a member of the School District says, is to teach students how to be inclusive.

I cannot believe 11-year-old girls are being told they have to consent to boys who want to dance with them. And before you say something about it likely going the other way, we do not have a big problem in our society with men being sexually objectified, harassed and abused. Sure, it happens and it’s equally unfortunate, but women endure far more assault and far more frequently. So we’re going to only look at it from the girls’ side.

The message this sends to our children is that you have to comply when someone wants to be physical with you. We’re not talking forcing someone to sit at a lunch table with you during school lunch here; we are talking about a little girl having to allow a boy to put his arms around her, touch her and move with her body to music. This is not okay and needs to be protested, in my opinion. We need to reach out to the school officials. We need to explain that every person always has bodily autonomy.

But many of us aren’t upset. Why? Because if you google this story (and you should, because it’s real news), you will see headlines like this: 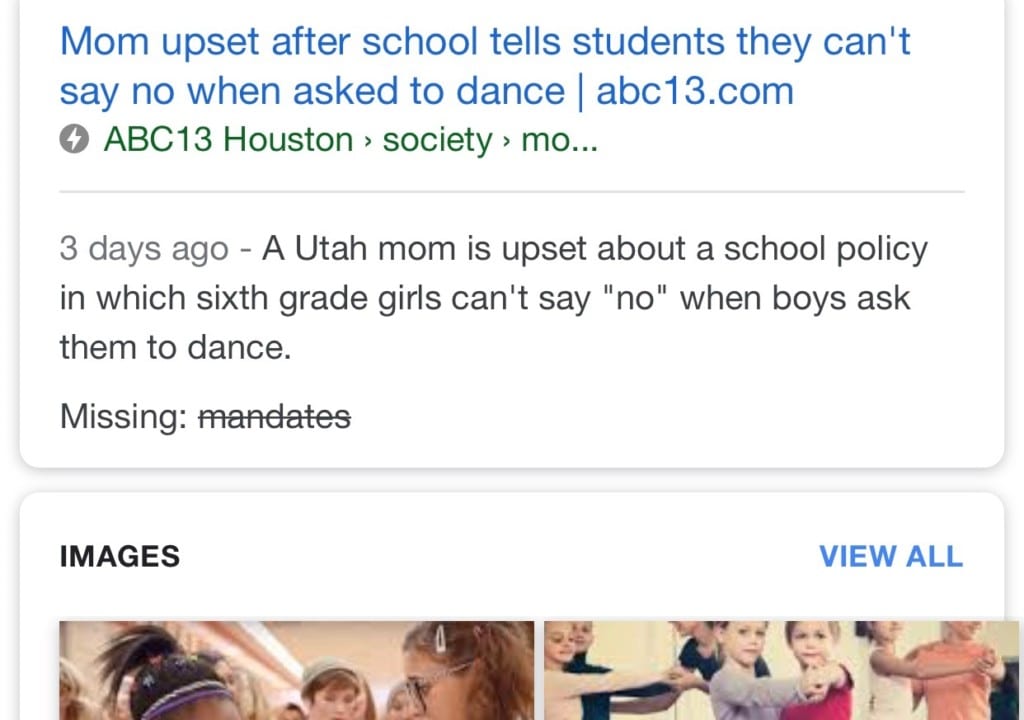 “Mom upset after school tells 6th graders they can’t say no when asked to dance.” MOM UPSET. The title of the article frames your thinking, and instead of calling the rule out for what it is, the focus is on the mother’s emotions. Of course the mom is upset.

In any other circumstance, would a mom be fine with a boy touching her daughter when she didn’t want him to?

The mom is upset because the rule violates her daughter’s right to say no to a boy. This rule prioritizes the person who desires someone over the person who is the object of desire. I understand that they probably mean well, but meaning well is not an excuse to allow this kind of mentality to continue. Not anymore. Not since #MeToo.

I do not live in this district and my children happen to attend a school where this would never be an issue, but I’m flipping upset.

Having been sexually abused as a child, and only coming to deal with the pain and anguish it caused me just before the #MeToo movement began, I am angry. I am angry at the way our society is set up. I am angry that in 2018, girls being forced to dance with any boy who wants to dance with them doesn’t spark more outrage. And I am beyond angry that the few places that are covering the story are leading with the girl’s mother’s emotions.

She deserves to have emotions about this. It is a messed up rule!

Women, we can and should get mad about this. We shouldn’t tear each other down. We need to come together and work against outdated, misogynistic polices, and we should stand up against the coverage stories like this receive.