I always dreamed of Christmasing as a mom. I just knew I’d be as awesome at it as my mom. Every year was absolutely magical and fun. She and my dad had to work extra hard to make everything great, not only because money was tight, but because my birthday is Christmas Day and my brother’s is the 27th. They went into overdrive to make sure we felt special, and everything wasn’t lumped together. Santa always brought birthday balloons (I’m STILL trying to figure out how they pulled that off every year) and didn’t wrap presents; mom and dad had wrapped presents for us, and birthday gifts were wrapped in birthday paper that I wasn’t allowed to open until the time of my birth, 6:18PM. They were so good at the game that I believed in Santa until I was at least 11, and after that, I believed in the magic for my brother who was five years younger. Mom was also the Pinterest Mom before Pinterest existed; she had the patience of a saint and the craft stash to rival a Hobby Lobby. We’d secretly listen to The Carpenters Christmas album in September when my dad wasn’t home to roll his eyes at us. We’d bake for weeks and deliver goodies to all of the neighbors on Christmas Eve. Our teachers got handmade gifts, and we learned the lessons of giving even when we didn’t have much to give. 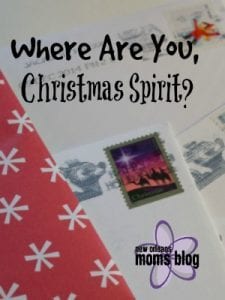 Christmas as a kid was beyond magical, and we didn’t need to be rolling in money or free time for it to be that way.

This is the first year that Bennett really gets it. He’s interested in the Nativity, Santa, and his Elf on the Shelf equally. He’s begging to make cookies and salt dough ornaments, and he won’t stop singing his pre-k Christmas program song,” Jolly Old St. Nicholas.” Meanwhile, I haven’t addressed a single card, the idea of baking fills me with dread, and I’m totally panicking about bills. I barely remember to move the Elf – thank goodness my husband remembers when I don’t.

Who am I and what happened to the old Lindsay? Normally by this time I’m knee-deep in cookies, cards are sent out, everything is purchased and wrapped, and I’m spinning around the living room belting out Christmas Carols at the top of my lungs. This year, I feel like I’m just going through the motions and fighting a clock that is laughing maniacally at me. I’m doing the small kindness stuff I always do – leaving extra money for tips, dropping money in the Salvation Army bucket, shopping for the Angel Tree gift … but it doesn’t feel like it usually does. Hardly any of the gifts are at our house since we are doing Christmas with my in-laws out of state, so there isn’t much to wrap until I get there. I want to make ornaments with the kids, but I find that I get a little too frustrated and OCD when craft time comes around, and I just want to get it over with before it even starts. I have a list of photos I want to take of the kids, but my camera is just sitting there on the shelf. We have tickets to some festive events around town, but I’m in no hurry to schedule our attendance. 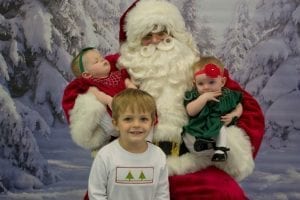 Last year, I was 30 weeks pregnant with the twins, and I was so miserable that I was ready to shank anyone that looked at me funny with a candy cane. I told myself that 2014 would be extra special because I just didn’t have it in me physically or mentally in 2013.

Well here we are, Christmas 2014, and while I’m not feeling the need to fashion a sugary shank, I’m just not in the spirit I want to be in. Why can’t I get myself together this year? Am I really out of it? Is it that it was 75 degrees for the better part of the last ten days? Have I put December on a pedestal that I can’t reach? Or is it that these are all normal feelings that I just need to push through for a few weeks in order to take in all of the magic around me?

I will likely only get the cards that make me happy enough to display on my fridge until April if I continue to send cards. I really do love to bake and make or do things that bring others joy. The bills will still be there December 26th.

Meanwhile, I only have a few years where their tiny hands will make the perfect Santa Beard and their fingerprints will make colorful lights on a salt dough ornament. Bennett will only call Rudolph “Rudolph the red-deer reindeer” for so long. Kellen Clair will only try to sabotage the Christmas tree with the fervor of a catnip-drunk housecat for a short time, and Genevieve will only find joy in clutching the shatterproof ornament like it’s a precious jewel for a little while. These are the years where I have the chance to establish my rapport as a mom who loves Christmas …. which is exactly what I am. 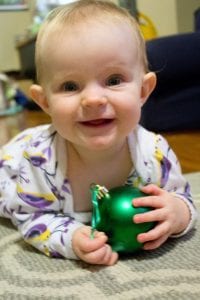 I’m going to dig deep, ignore the hard adult stuff for a couple of weeks, and find joy in their eyes.

I’ll drink a craft beer before I pull out the craft paint and while I clean the flour and chocolate off of the ceiling if I need to. I’ll create that spreadsheet of addresses for Christmas cards so next year I can do a mail merge, and I won’t avoid my current system of collecting addresses from scraps of paper and old text messages. I’ll get everything wrapped when I get to my in-laws, and I’ll tear up when Bennett sees that he got the Nerf gun he asked Santa for that I reluctantly agreed to let his dad purchase. I’ll take a million pictures of the girls playing with the bows and tissue, because that’s all they’ll really care about. I will hug my husband for helping me make it all happen and keeping me grounded along the way. I’ll do my best to thank my parents and my in-laws for passing their wisdom along by example.

I’ve still got 15 days to get it right. Operation spirit begins now, and even if it isn’t perfect, hopefully they’ll only remember the good stuff like I do. 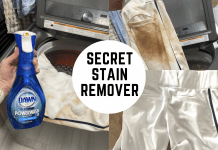 The Secret Stain Remover Every Mom Should Own

They Love Me, Even When They Don’t Like Me

How to Survive a Smocked Sample Sale