I just returned from visiting friends and family in France. I was particularly excited about going back because I met with old friends who now also have kids. My husband and I were first to have children among our friends; so far, I had missed being able to observe how my French friends raise their own kids, and if there were any parenting differences.

There are. And to be honest, I think that French moms are better at two things. First, they couldn’t care less about what other moms think of the way they parent. Second, they let their kids have their own space.

Now, about the attitude. The French mama will tell you that she sees her kids too much, without shame. She has five paid weeks of vacation, and there is probably one taken without les enfants. It’s not that the French mom doesn’t love her kids. She knows that to be a good mom, she needs to be happy. She takes care of herself and doesn’t let herself go. Au revoir yoga pants, bonjour lingerie! No leggings in sight at the mall or the grocery store. I observed polished moms wearing heels and looking genuinely happy – with or without their kids.

Something else I found surprising: If the French mom wants to give formula to her baby, she will. Many of my friends didn’t nurse out of convenience for themselves. Most had 10-12 weeks paid maternity leave and may have nursed for a week or so, but many told me that it was “too much.” I did not hear any guilt when they explained their decision. 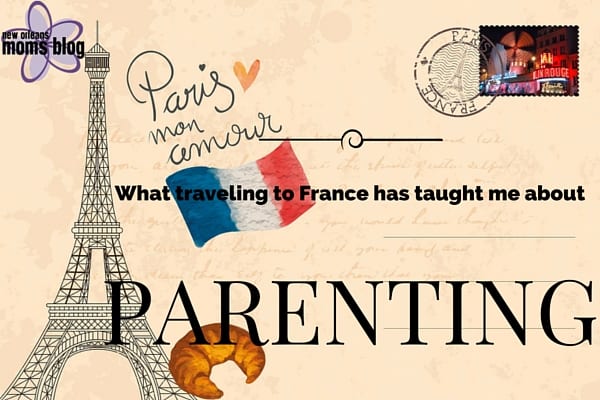 The French mama makes life with kids seem like normal life, not a race to be mother of the year. She will pull out a potty during a reception because she’s training her toddler. She will discipline her kid in public if he/she misbehaves and won’t care if the child is throwing a massive tantrum. She firmly stands her grounds. She’ll laugh at her kid who fell in a puddle before picking him up and saying “I told you so.” She’ll forget the baby’s schedule if she’s enjoying herself at a party. Sometimes, I feel like motherhood has changed my life completely. As if being a mom and being a woman weren’t fully compatible. Observing my friends, I found that they were able to manage motherhood with grace, and (sigh), almost effortlessly.

Reflecting on French parenting, I think that it is consistent with the way the French see life – imperfect. The French love to complain about the imperfections of their lives: the weather, the strikes, the smells in the Parisian metro, the tardiness of the TGV fast trains, the soggy baguettes, the high cost of tolls and gas … but they also understand that life is not and should not be perfect. It is nearly impossible to get an 100%  in high school or in college – and don’t even think about asking for a study guide. People accept crooked teeth, imperfect skin and small breasts, without attempting to change them to “fit” a model. Actually, conformity is somewhat rejected and originality and uniqueness are valued. The result? French mamas aren’t running after a mothering ideal. They are the mothers they choose to be, and it means that some days, they are less than perfect, but c’est la vie!

Now the French kids … are just kids. They stomp their feet, push their plates, and repetitively say “NON.” But early on, they are given space. Space to run, space to be bored, and space to grow. They go to school at age 2 (and most are potty-trained by then), and when they’re not at school, there’s a high chance they’re just out playing in the yard or growing potatoes with their “papa.” No overbooked schedules with recitals, aftercare activities (school goes until 4:30pm), and sports. No endless queue of summer camps. Kids are being kids. They play a lot and are left alone to figure out what to do with themselves. Yes, they watch TV. They play video games too. But overall, I observed a lot of French moms tell their kids – even young – to go and play so they could catch their breath. French kids learn how to cook and taste early on, and most join daily activities to help out  – in their own way. One of my friend’s toddlers folds all her towels. Another’s helps to clean the car outside with a bucket, water and soap. Kids are not slaves, but they take an active role with chores early on, because they’re part of the family and everyone helps, period.

Following that path of parenting laissez-faire is pretty exhilarating, if you ask me. I came back from my trip really rejuvenated. I feel like a better mom because I care less about being a mom, if that makes any sense. Merci la France! 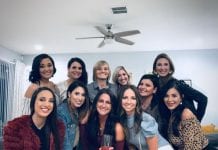 Ambushes in the Way of a Lady in Labor in NOLA