At first it sounded like someone, somewhere was chanting in a grating voice. On a dreary morning between Christmas and New Year’s, I’d bundled up my daughters to get some fresh air on the porch of our house, which we’d moved into two weeks before.

As the sound got louder, I realized it was a neighbor. Was he yelling at the workmen in my backyard?

When buying a house you can scope out a neighborhood block to some degree, but of course you can’t know everything until you move in – and this always made me nervous. What if a dog next door barks during naptime or worse, if there’s a really terrible neighbor?

I herded us inside to protect my girls’ ears from the slurs I could now hear with clarity. Could it be that my fears about becoming a home buyer were already being realized? Was this neighbor a bad seed on the block? 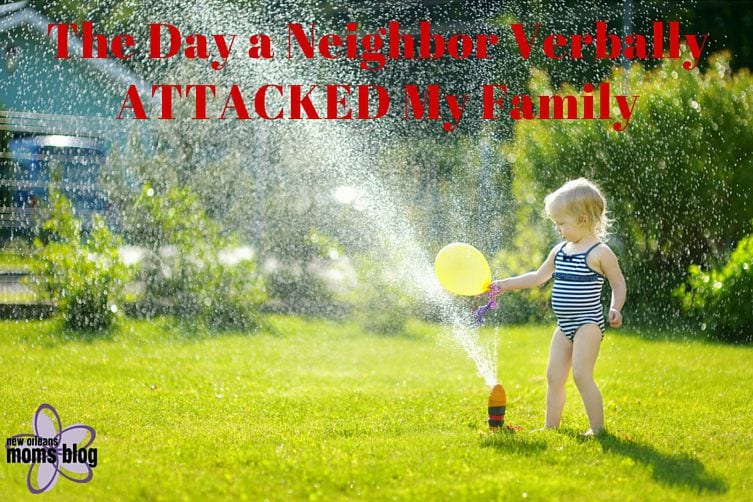 After putting my baby down for a nap and settling my toddler in front of her beloved “Daniel Tiger’s Neighborhood” (irony, noted), I poked my head out the back door. Indeed, from his back porch, my white neighbor was harassing the Mexican workmen who were rebuilding our deck. The same kind, respectful workmen who had worked for six months to renovate our house without incident. I apologized profusely to the workmen and asked if they wanted to quit for the day, but they kept on working. The guy sounded like a broken record of ignorant stereotypes and bigotries — certainly the opposite of what I’m trying to teach my children.

“Are you serious?” I asked him in utter shock.

“Yes. I’m off my meds and drinking again. I’m not going to make your stay here very nice. I hope you abort your unborn Jewish child,” he said.

Thanks, a%*hole. On top of being a supreme racist, you also just told me I’m fat!

Back inside, I almost threw up. I was exhausted from being a few months postpartum and experiencing full body revulsion at the sound of the guy’s voice, which we could hear all through the house. “Stay calm to protect your milk supply. Stay calm to protect your milk supply,” I chanted to myself. I’ve witnessed plenty of racism and been stereotyped for being Jewish, but this abuse was happening in real time, in my backyard, while I was home alone with my children.

My husband came home from work at soon as he could. The guy called him a “white devil” and “Jewish overlord.” We talked to other neighbors and learned that the guy was a renter and that the homeowner also lived in the house. After screaming and screeching at our workmen for an interminable five hours, he finally exhausted himself and quieted down. Before we went to sleep that night, my husband put a note on what we figured out was the owner’s car asking him to call. All night long, I worried about our family’s safety. Would there be more incidents? How would we feel using our backyard knowing who lived next door?

The next day, the homeowner called and apologized profusely. The guy had never exhibited that kind of behavior before and was a recovering alcoholic who was having a rough holiday season, he said. The homeowner thanked us for not calling the cops. We told him we had certainly considered it and would if it ever happened again.

The next week, the guy and his girlfriend showed up at my front door. Through the glass, I could see the looks on their faces were the definition of shame, so I half-opened the door with my baby on my hip. My toddler was excited to see new faces and began showing off while they spoke, them on one side of my threshold and us on the other. The guy said he didn’t mean the things he’d said. He’d had a bad week and drank for the first time in over a year. “I only talk like that when I’m drunk. Most of my roommates in college were Jewish.” Did he really just give me the “I’m not anti-Semitic, I have Jewish friends” line?!

I told him I sincerely appreciated how hard it must have been to come apologize in person. Since then, they’ve been considerate neighbors, stubbing out their cigarettes when we come outside to play, or apologizing when their grass is overgrown. In turn, I text the girlfriend when I notice their dog has gotten out (ironically, she often ends up in our backyard).

I have sympathy for the guy’s struggles, but I’ll always be weary of him. For many months after the incident, I kept our curtains drawn, not wanting to see their house. Though I’d been so excited about our new backyard, I was hesitant to spend time there and had to ease into feeling safe. Despite the apology, I believe the foul things that came from his mouth when he was drunk are a truth he must hide from others, maybe even himself, when he’s sober.

I no longer let the guy spoil my fun or dull the happy sounds of my daughters playing outside, but I can’t forgive his bigotry, especially when it was literally in my own backyard.

Please Don’t Say THIS {And Here’s Why}