“They’ll just Jew them down.” These were the very unexpected words I overheard from one female employee to another while checking out of a recent doctor’s appointment. My ears burned; my heart raced. I walked around the corner to figure out who was speaking.

When I got to my car, I emailed my doctor what I’d heard. I 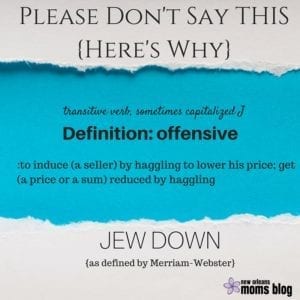 told her my best guess was the woman didn’t realize her words were offensive. Maybe she grew up with her grandparents or parents using them in a casual way and was unaware of their anti-Semitic origins. If so, then of course it doesn’t carry the same weight as, for example, the time my former neighbor, while drunk, told me I should “abort my Jewish devil child.” But it does reopen old, anti-Semitic wounds and perpetuate an antiquated prejudice.

Being in a minority – mine is being Jewish in the South – you get used to people saying things to you that they shouldn’t (“You don’t look Jewish!”). You also realize that some words truly don’t come from malice but from lack of exposure or education.

I’d like to think that the actual prejudice behind the words has lessened significantly, generation to generation. But time doesn’t take the sting out or change the history behind it. I mean, the term is literally defined as “offensive” in the dictionary. In my research for this post, I learned that the Anti-Defamation League’s website has what they call a Pyramid of Hate. Insensitive remarks like “Jew down” fall at the bottom of the pyramid, and acts of murder and terrorism are at the top. However, I believe that like the ADL says on their site, “If people or institutions treat behaviors on the lower levels as being acceptable or the ‘normal,’ it results in the behaviors at the next level becoming more accepted.”

Just an hour before, during a long drive to my doctor’s appointment, I had listened to the soundtrack for “Hamilton” the first time. The unlikely, brilliant hip-hop musical about the American Revolution and the country’s first Secretary of Treasury Alexander Hamilton had won big at the 2016 Tony Awards the night before.

I was raised on show tunes and saw an enormous amount of theater while living in New York in my 20’s. The fog of baby girl number two kept me away from the initial “Hamilton” hype, so the Tonys were the first time I “met” Hamilton. Watching the musical’s creator and star (and new parent) Lin-Manuel Miranda and cast transported me from tired mom to a giddy, clapping wildly at the TV, revived human being.

The awards show gracefully recognized the mass Orlando shootings, which occurred in the early morning hours the day of the awards show’s telecast.

In my car, the soundtrack was an escape from wondering: could my vibrant, sour, sweet, beautiful, loving daughters be senselessly gunned down in a nightclub one day?

I tried to match the actors I saw on stage during the awards with the voices singing in my car. I got lost in a revelry thinking of how fantastic and melting-pot American the diversity of Hamilton’s cast and the award show’s winners were. I got chills when I remembered the power and emotion of MacArthur genius and Pulitzer Prize winner Lin-Manuel Miranda’s acceptance sonnet when he won Best Original Score for writing the show’s music and lyrics:

“History remembers,” Miranda recited. Even if the prejudice behind “Jew down” has not traveled down the family tree with the phrase, history remembers.

I’ve Made a Difference

Later in the day, I received a wonderful email from my doctor. Her office was apologetic and shared my belief that the woman was unaware of the offensiveness of her words. The office will use an article I shared, “5 Words You Might Not Know Were Considered Racist,” as an educational tool for the staff. Maybe the woman will stop saying it, maybe she won’t. Or maybe another employee will explain to a parent or grandparent why they shouldn’t say it.

History does remember hate. The history of American bigotry includes the momentous and catastrophic, from the slavery of Hamilton’s time to Rosa Parks to Orlando. It also includes daily, insidious incidents like the one I overheard. I grew up highly aware of these issues. While channeling my inner change-maker, and inspired by Miranda, this un-showered, stay-at-home mom proudly spoke up for my beliefs.

If my battle – yes, with hormones and disgust raging, I felt like I was in a battle – stops just one person from saying something that makes me wonder if history might repeat itself, then I’ve won.