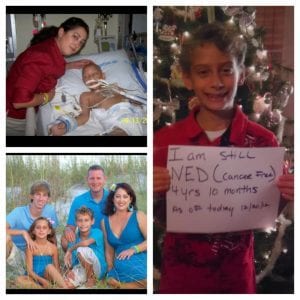 “We think it’s cancer,” is probably one of the worst things a mother can hear about her child. That nightmare became a reality for one local mom, my sister-in-law, Iris Orlando, on April 13, 2007. Her five year old, Tony, had been complaining of not feeling well for a few days. It likely could have been ignored, or at least she could have waited for a regular doctor visit, but her mommy gut told her otherwise. That evening, she took him to Children’s Hospital where she learned he had a large tumor in his abdomen, and within a few days came the startling diagnosis: Stage IV Neuroblastoma. Tony was given a mere 20% chance of survival.

The fears and devastation were met with support and faith, and through a series of treatments, surgeries and prayers, Tony beat the odds. He was declared NED (No Evidence of Disease), on February 6, 2008. However, he may never be “out of the woods.” Tony still receives full body scans every 3-6 months, and this will likely continue for several more years. The relapse rate is high, and though they are hopeful he will not relapse, each series of scans brings with it the possibility of a diagnosis. Every few months, his parents sit on pins and needles waiting to hear the news. Thankfully, it has been nothing but good news these last five years.

On a mission to pay it forward

Being ever so grateful for her son’s health, Iris has been on a mission to pay it forward. She has worked with fundraising organizations, such as Cookies for Kids Cancer and St. Baldrick’s, to help raise money for pediatric cancer research. She helps in other ways by meeting with families of children who have been recently diagnosed. Iris offers her experience, her prayers, and her shoulder for these parents. She knows what they are going through, and she works to make a difference in their lives during an unimaginably difficult time. “These people are in desperate need. They need help,” Iris said when talking about some of the families she has met. She is also in the process of helping organize fundraisers for a newly diagnosed two year old boy.

St. Baldrick’s: One brave mom will bare all

St. Baldrick’s formed March 17, 2000, when three men turned their annual St. Patrick’s Day party into a fundraiser. Their goal was to shave 17 heads and raise $17,000 for childhood cancer research. Nineteen heads and $104,000 later, they realized they had to continue this effort. Since then, St. Baldrick’s has raised more than 150 million dollars and helped countless families.

This week makes five years that Tony has been cancer free. To celebrate this enormous milestone, Iris is not throwing a party or taking a family vacation. Instead, she is shaving her head. That’s right! Iris will attend the next St. Baldrick’s event. In order to raise money for pediatric cancer research, volunteers collect donations and go under the clippers. While this is for an incredible cause, any woman knows the amount of courage it takes to sport a bald head, and Iris is going to rock it.

Iris hopes her shaved head will not only raise $15,000 for the foundation, but that her shiny noggin will be a conversation starter and raise additional awareness for childhood cancer. 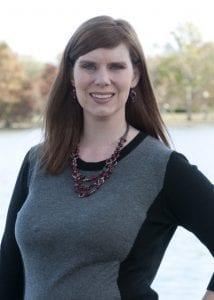 Myndee is a 34 year old native New Orleanian and work at home mom. She has been married to her husband, Luis, for 10 years. When she’s not out and about with her three kids, Myndee makes local coffee shops her “office” where she works as a social media manager. She also strives to ensure her family is living an eco-friendlyish lifestyle. Myndee is a lover of wine, social media, Disney World, photography and writing. 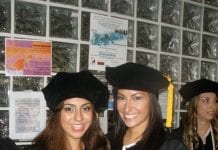 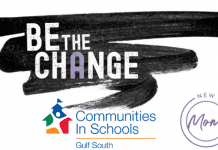 New Orleans Be the Change Spotlight :: Introducing Communities in Schools of the Gulf South