{How to help Hurricane Harvey Victims}

From NOLA to Houston, With Love

We’re just a few days shy of the anniversary of Hurricane Katrina, and our TVs and social media feeds are again full of spaghetti models, cones of uncertainty and images of lives turned upside down. It’s Katrina revisited.

I don’t know if it is the anniversary of Katrina or a little PTSD setting in, but seeing the pictures of floodwaters reaching the tops of street lights has my emotions stirring. Today, I saw Facebook pictures of trucks, the Cajun Navy, towing boats headed to Texas. These men and women embody the Louisiana culture of neighbors helping neighbors. Just as we share food with the tailgate next to us or share supplies with fellow parade goers on the next Mardi Gras ladder over, our community is bonded in resilience. 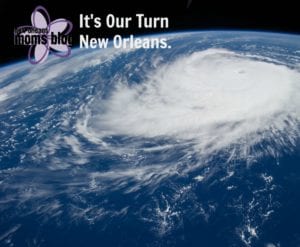 Now our neighbors to the west are facing a new reality that we know all too well. It’s way too familiar, and that call is being answered immediately by a group that was formed out of necessity. Nowhere else in the country would a group like this exist, and that is what makes them so special.

This dedicated group is headed to Texas to repay a debt that New Orleans owes Houston. Honestly, I think everyone hoped we would never have to repay that debt and here we are a mere 12 years later. I am also pretty positive and confident that Houston never wanted to find themselves in this place of needing the debt repaid.

As Harvey continues to terrorize Houston, it is now our time as a city to turn towards Houston with open arms and open hearts. Remember the days following Katrina as bus after bus and flight after flight left New Orleans bound for Houston. Still today, Houston is home to many New Orleanians who left escaping Katrina that never returned to our city.

As a community, we know exactly how they are feeling and understand first-hand that the days, weeks and months – and in some ways, years – ahead are going to be hard and trying. There will be plenty of uncertainty and tears for everyone. We know the resources they will need and that the recovery is both emotional and physical.

Mr. Rogers once said look for the helpers. There may not be a clear path of how each person can individually help at the moment, but I would encourage everyone to look for those opportunities as you find them.

Now is the time, New Orleans, for us to send light, prayers, and supplies. From NOLA to Houston with love. It is our turn.

{Also worth noting :: what NOT to say to flood victims}

Sarah, I Am Happy to be Your Village