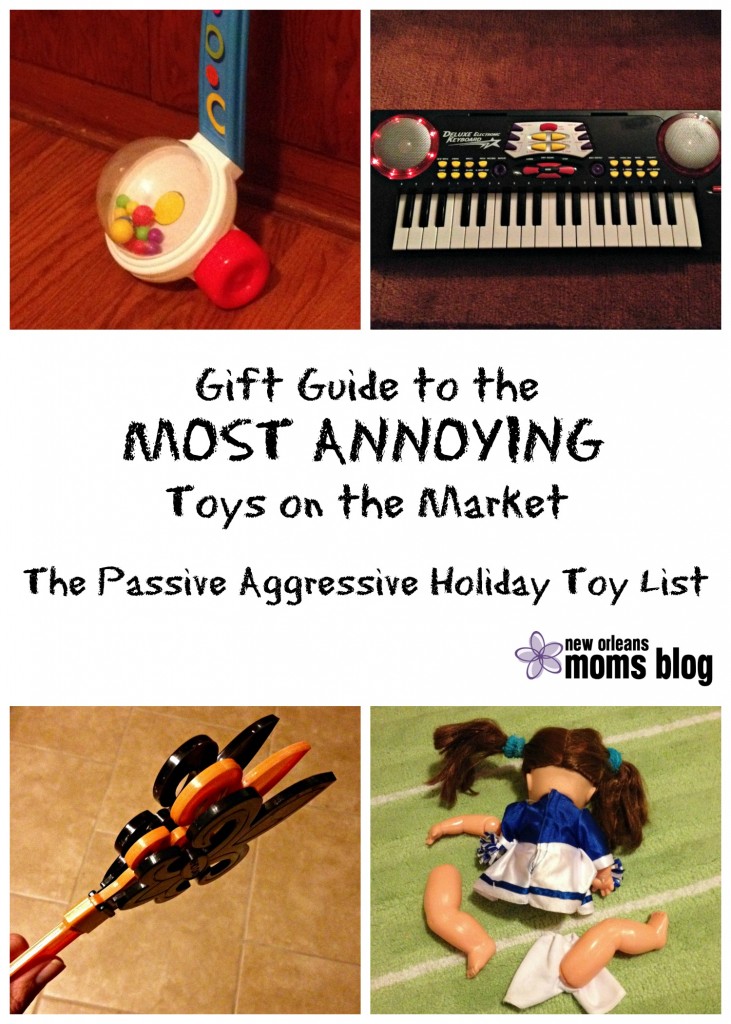 Following a day of toddler shenanigans that included “sword” fights and listening to continuous poor renditions of bad 80 beats, I was compelled to compose my top worst, and most annoying, kid toys ever.

Disclaimer :: The saying goes that it is better to give than to receive – if you were the gift giver of one of these unique toys, please don’t take offense. This post was intended to highlight those toys that require more patience around a caregiver and that have ended up in “Toy Purgatory” in many local New Orleanian households. Additionally, depending on your holiday giving spirit, this could also revert to Passive Aggressive Toys to Give this Holiday Season.

Noisemaker on a Stick

Annoying parents since the late 1950s is the Corn Popper. Even I recall playing with one as a child, as it was designed to teach toddlers how to walk. Once your toddler has mastered his first steps – which quickly turns into running – this colorful toy delights parents with a constant popping sound, as the balls bounce off the magical clear dome. The last thing the kids note are the various colors of the rainbow jumping up and all around inside since they are too busy creating a reaction from their caregiver. Instead, it is a means for parents to chase after their little ones creating even more noise and faster “pops!” I nominate the Corn Popper second in comparison to the following most irritating toy on the market.

Imagine the worst DJ music ever … times 10. The keyboard, with endless poorly prerecorded beats that did not make the cut for American dance floors, can also play in the background while your little one believes he is the next Bach or Chopin, playing for your enjoyment. However, the best version on the market includes the inadequately designed keyboard that starts on loud and reverts to loud every. single. time. it is turned on. So, if you have a clever toddler, once you immediately lower the volume, they will turn it off. on. off. on. (You get the idea.)

This make believe toy has literally awaken me in the night and caused me, in my sleep haze, to reach over the side of my bed seeking a newborn to nurse. The cries are so real when you are in that seldom REM stage of sleep during parenthood that it has been known to have past nursing moms breasts ache in pain. Why any parent would purchase such a toy for their own child is beyond me, but I have noted that the recipient is often a grandchild or niece or nephew – perhaps from a relative with very distant memories, or lack there of, of a crying child. 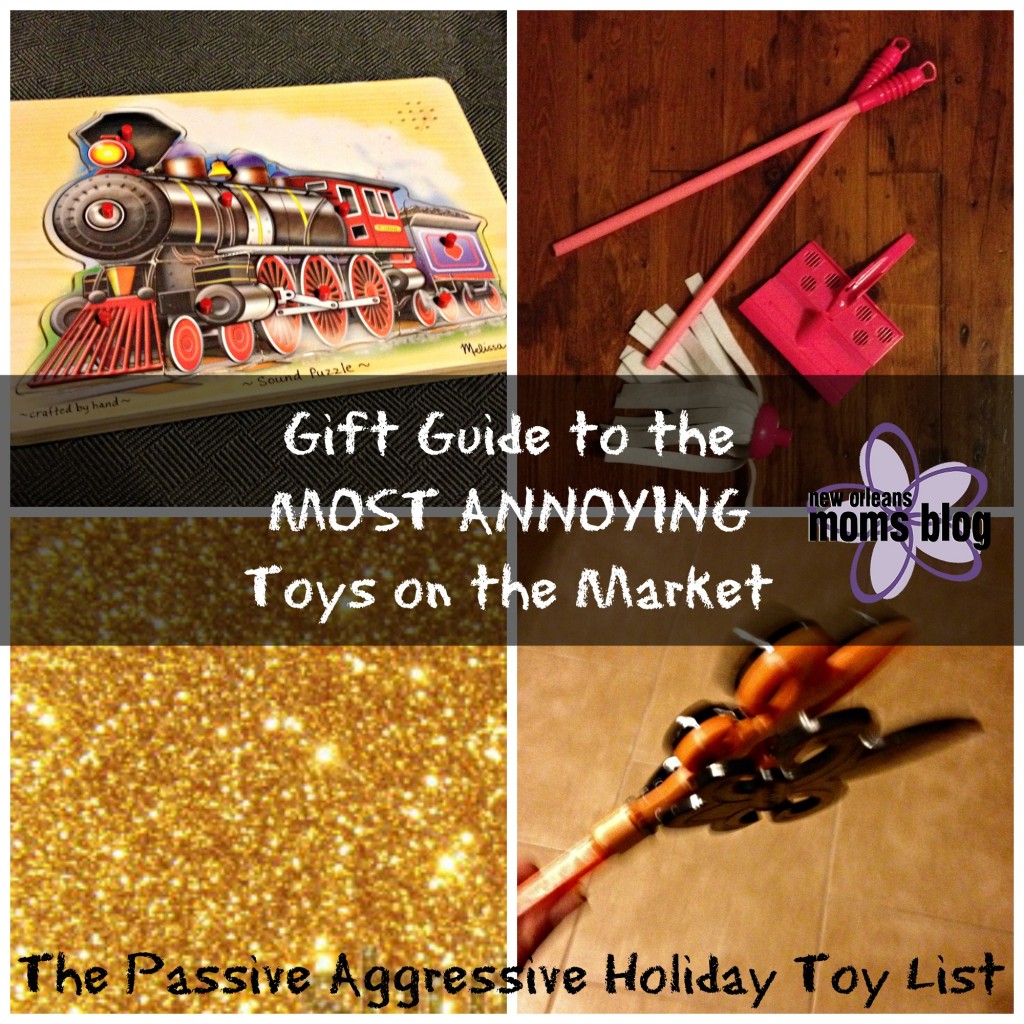 This toy has quickly become one of our least favorite in our household. Imagine deep in slumber and awakening to the sound of a … train! You get up thinking a tornado is looming ahead, but no, it is the cat who jumped onto the talking puzzle designed to blow it’s air horn when it senses movement, or worse yet, randomly makes noise when a piece is missing. Which, by the way, when you have a toddler, is more often than not the case.

Last year, Santa thought it would be a good idea to provide the little ones with their very own cleaning set. Wouldn’t it be cute to have them “clean” right alongside mommy? Er. Wrong. Instead, they were provided with plastic “swords,” perfect for defense from their sibling between giggles and cries. Let’s just say the money can be better spent buying actual cleaning products or, better yet, put towards cleaning service.

A staple in most American homes, the hungry hippo game is for fierce competitors. The faster and more pressure you apply, the louder and louder the sound and more addictive it is for children, or even the perpetual kid, to handle. Just say no.

No, I am not talking about the low grossing movie in 2001 with Mariah Carey. Let’s just say this shimmery product is banned from our home because it gets EVERY WHERE and seems to act like a litter of bunnies that multiplies into two once you have picked up one speckle from the floor.

Because little New Orleanians just don’t have enough balls in their home. Every kid leaves a parade with at least ten, and poor parents are subjected to bring them all home, since each one was carefully selected for their little ones by an often impaired rider. Warning – these are tripping, and sometimes choking, hazards. I highly suggest investing in a covered container and disposing, I mean storing, them in a proper location. Wink. Wink.

It was not until this past Mardi Gras that I had not realized how much I did not miss the sound of plastic “hands” bouncing off one another at rapid speeds. They come in an array of designs including angled arms with balls and my ultimate favorite, three hands. The ones in our home are black and gold, of course.

Why I No Longer Have Expectations Since Becoming a Mother

A Confession of a Fantasy that Began a Thousand Miles Away:...