Sometimes, I get so caught up in the grind that I allow myself to miss out on things that bring me (and the kids) joy and calm. Though I was raised a city girl, I’ve always had a connection with nature and the outdoors. When I’m feeling anxious or angry, I step outside for a few minutes to collect myself. When my son was a baby, he would instantly calm from a crying fit when I took him outside. A change of scenery was all he needed to pull himself together, just like me.

The other day I found myself aggravated with him that he asked the twin toddlers if they wanted to go outside while I was trying to get some work done at home in the afternoon before dinner and their dad got home. He’s five and allowed to go play in the fenced backyard alone, but throwing the girls in the mix requires me to stop what I’m doing and go outside to watch them. “OUHSIDE!” they started to yell in unison. I fussed at him for clueing them into the idea. Couldn’t he see that I was working? 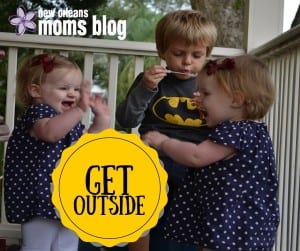 Then it hit me. It probably always looks like I’m working (which I am, on one thing or the other) and never looks like I’m willing to go have fun with them. I packed up my computer, got everyone’s shoes on, and headed outside. I set the girls up with the sand table and I pitched the wiffle ball to him. I had only pitched to him once before. I texted his dad to tell him he hit like Marla Hooch; out of the park and off the walls. “You’re a good mom,” he texted back.

Not really, I thought. I answered work texts occasionally between pitches even though I shouldn’t have. Next time I won’t, I thought. They could have waited. I got frustrated with our son when he asked to go play. My biggest complaint with school is that he doesn’t get to play enough, and here I am, after school, aggravated with him that he wants to … play. I’m not good at taking the stressful things at the forefront of my mind to the back in order to be part of the things my kids find joyful. And look at that; somehow I managed to take the joy out of a compliment by beating myself up. Such is the cycle. 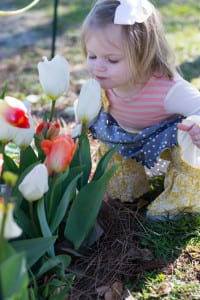 Did I feel better and less stressed after we went outside? Yes. Was there stress waiting for me inside, like the clock telling me dinner would be late (because we played outside) and mountains of laundry and bags to pack? Yes. Was I able to handle it better overall because I went outside? You bet.

Kids, man. Sometimes they know exactly what you need, even when you don’t. I need to get out more: out of the house AND out of my head.

10 Ways I Will Parent My Teenager Like a Kindergartener