Here in New Orleans, there seems to be a collective dread about school choice options and their associated admissions processes. Ask anyone with kids about to enter preschool or lower elementary school and you will be met with a groan. The research people do prior to applying rivals that of Masters degree candidates.

You want to go to a private or Catholic School? Hefty registration and religious fees can be prohibitive. The OneApp is just plain confusing and frustrating, even though they’ve worked tirelessly to make it fair and equitable to people from all racial and socioeconomic backgrounds. Some of the charter schools allow students from all over the state and some only allow students from Orleans Parish. Some have neighborhood lotteries and then some have sibling preference. Jefferson Parish has regular neighborhood public schools, public magnet schools, and Advanced Study Academies … and each of those groupings has its own application process. Some of them have tiered admissions processes and some of them go solely on test scores. Some of these application processes start in September the year prior to entry. Some of them don’t let you know what your status is until the end of April.

All of that is enough to give anyone a headache. When it came time to choose where to send our identical twins, we knew that we would apply for the school that their brother was able to test into. We also knew that it was very plausible that neither of them would get in. Well-meaning friends and strangers must have asked us a thousand times what our plan would be if one got in and another one didn’t. “We’ll figure it out,” I’d say. We made backup plans in the meantime.

We prepped them for the test and bribed them with the possibility of going to school with their big brother. They both cleared the hurdle of going into a classroom without us with strangers. But would they talk? Would my shy, stubborn girl refuse to perform? Would they actually show those people how much they knew? We had to wait four months to find out. 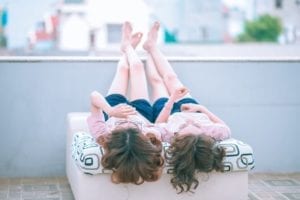 The week that results were mailed, no less than 637 scenarios went through my mind. I completely prepared myself for neither of them to get in. What I didn’t prepare myself for was the scenario that so many had proposed to us.

We are well aware of the enormity of our luck, privilege, and capability of our children. That being said, we know that it is going to be a rough emotional road for a while, especially the first few weeks of school in August. But we also know that it could’ve just been a bad day that stood between her and going to school with her sister and brother, as it could have been for dozens of other kids who took tests for school admission. We will try again, and if we end up with the same result, we will regroup and figure out the best path forward for our family. It’s all coming together and it’s all going to be okay. We can do anything together, even if that means a few of us have to be apart for a little while each day.

You can do anything for a year, right? Let’s hope so.

How You Can Support JC Ellis After the School Fire

When Picture Perfect Gets Provocative