Pre-parenthood, I swore I’d never spend money on official character stuff: Disney, Nickelodeon, whatever. I would always choose generic themed bed linens and I’d never buy character t-shirts or dolls. Never. Other people could buy them for my kids, but I would not give into the Lightning McQueens, Ariels and Paw Patrols my children begged for. Nope. 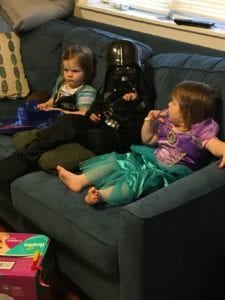 I held fast to my word until November of this year. I’m not sure what pushed me over the edge – maybe I was powerless to the Target pre-Black Friday under $10 sale on princess dresses with an extra 20% off Cartwheel coupon. Or was it the sudden onset of Star Wars fever in my five-year-old? Either way, it started slowly.

But then, THEN, the twins started with true Frozen fever seemingly out of nowhere, and I fell victim to their adorable requests for Elsha? Annya? Oyaf?. Was it because I saw Frozen in the theater when they were in utero? Did they absorb the desire to build a snowman by amniotic osmosis?

We’re a few weeks away from ditching their beloved pacifiers. Our first attempt will be a full court press: trimming the ends, making them give them freely to the pacifier fairy that lives at the beach (long days + playing with their cousins= bedtime crash) in exchange for gifts of their choice. Can you guess what the gifts of choice were when I asked? Elsha and cake, of course. Guess I passed my constant desire to eat cake through amniotic osmosis as well. 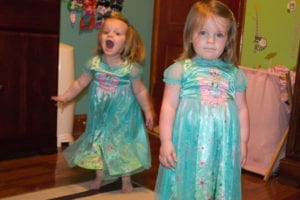 I didn’t know who I was anymore, and neither did my friends. I’ve caught a considerable amount of nagging in the days since.

That’s the thing about parenting, I guess. You can make all of the arbitrary rules you want, and then they’ll all get force fed to you in the form of humble pie. I won’t say it tastes delicious, but the kids sure do appreciate me eating it.

Revealing My Secret to Surviving as a Working Mom