The first time I came to New Orleans, I was a high school senior considering Tulane University. After spending an afternoon in the French Quarter, before I had even set foot on Tulane’s campus, I knew I was going to choose Tulane.

The music, the art, the culture, the food – the city had gotten ahold of me and has never let go.

As someone who has now lived in and around the city for a total of 11 years, and for the majority of my adult life, I’d like to think I’m a local. But if you’ve lived in New Orleans for any amount of time, you know that, when people ask you “where’d you go to school?” they mean high school, and if you didn’t “go to school” here, you’re not really a local. Perhaps it is this very sense that I am not truly a local that causes me to hesitate when claiming Katrina as my own tragedy, but it was certainly a pivotal moment in my life.

The days immediately before and after Katrina hit, are a bit of a jumbled blur in my memory. I had gone home to Tennessee for the summer and was preparing to return to campus for the fall semester that Saturday. We had packed my mom’s van to the brim with stuff for my dorm. As the hurricane approached and a state of emergency was declared, we figured move-in day would be postponed, but had no idea that the entire semester would not happen. We left the van in the garage, and my dad and I took turns driving my mom to work. I called the manager at the Ben and Jerry’s I worked at every summer and asked to pick up a few shifts because I couldn’t stand being stuck at home with nothing better to do than watch the storm coverage. As the strength of the storm grew, I remember screaming at my boyfriend (now husband) over the phone because he wasn’t planning to evacuate (the six-hour drive took him twelve when he finally left on Sunday). 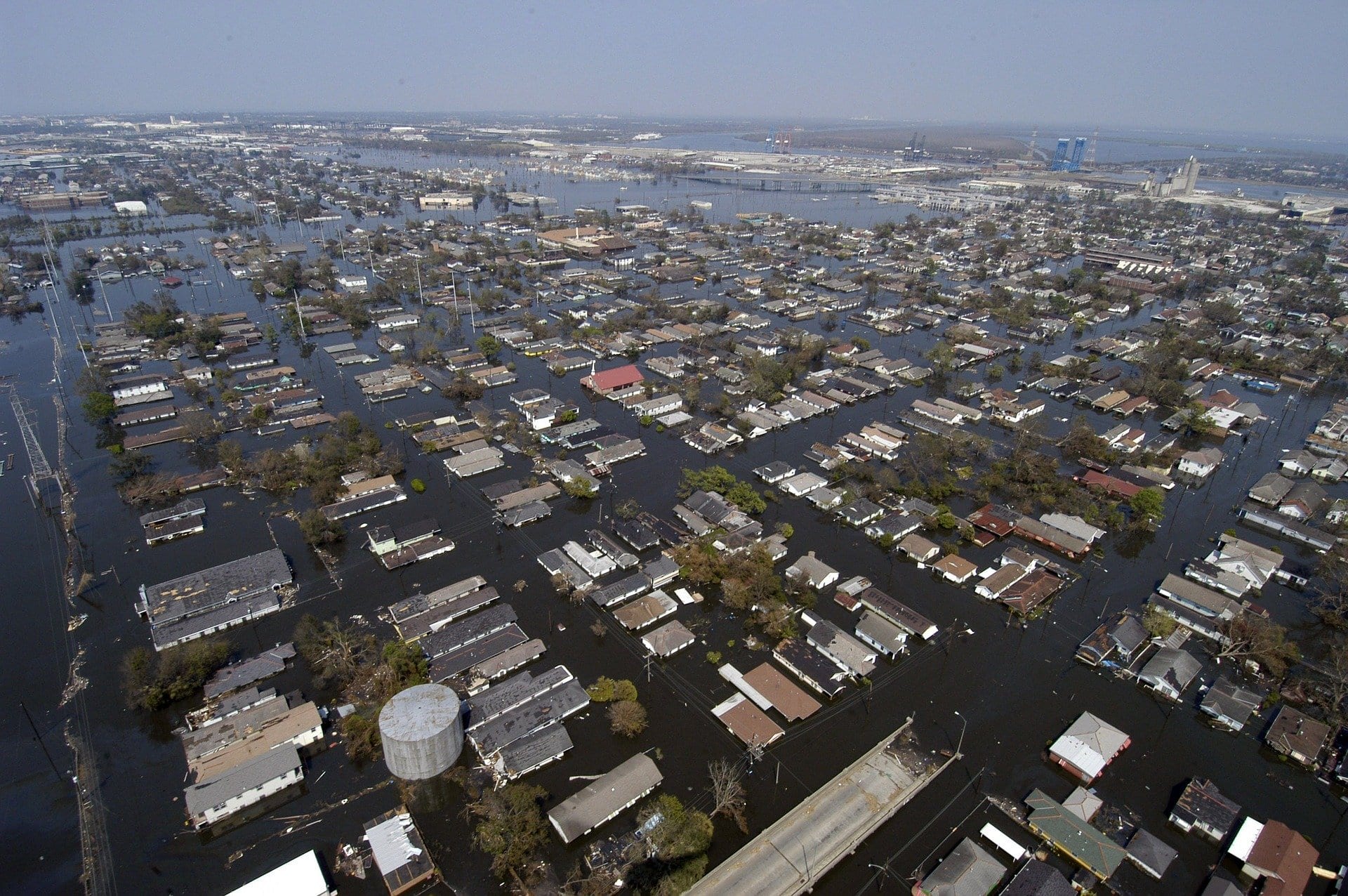 I remember being glued to the TV in the aftermath: watching the water rescues, searching for the familiar under the water, crying for the loss and the devastation. I tried over and over again to get ahold of a family I babysat for but was unable to because cell towers were down (it was over a month before I heard from them). I remember the slow realization that I would not be returning to school that semester, a realization that was confirmed by Tulane a few days later.

I remember the moment I knew we needed to unpack the van.

When local schools offered to accept refugee students, I argued with my dad about taking classes at the University of Memphis, finally agreeing to take one class and work full time. The registration office was standing room only, with many parents hoping to secure dorm rooms for their college-aged child so that they had one less person to worry about housing. At work, I tried to be a smiling, knowing face to refugees who came in for some Chocolate Therapy. I gave them suggestions on things to do in the area, and when they expressed sticker shock over the cost of private schools in the area, I assured them that the local public schools were great. We collected brownie and cookie batter containers for animal rescue groups trying to feed homeless and abandoned pets. I volunteered with the Red Cross. But all the while, I felt like my efforts weren’t making an impact. I wanted to be in the city, helping with the clean-up, but I was also thankful to be safe at home with my parents.

In October, my boyfriend and I returned to the city for a weekend to check on his apartment and tour the devastation. He did not lose anything because he was on the third floor and the roof had stayed on in his section of the complex, but many other residents had not been so lucky.  The entire first floor had flooded, and the management company had tossed everyone’s belongings into big piles in the parking lot. One friend’s family home in Kenner had been destroyed by several feet of water; another friend was housing many relatives in his Metairie home that had miraculously avoided major damage. The family I babysat for was living with relatives in Mississippi while the dad shifted between working shifts at the local hospital and working to repair their Uptown home on his own. We drove down street after street of houses pushed off their foundations, debris and ruined belongings piled sky-high at the curbs, and FEMA trailers signaling the slow return of civilization and reconstruction. We saw the Xs painted on every house. I don’t think I stopped crying the whole weekend.

Back in Tennessee, I didn’t know how to process my emotions. I did not lose my childhood home to the flood waters. I did not see the remnants of washed away landmarks and feel that part of my identity had washed away too. I did not lose loved ones to the chaos and anarchy that consumed the city in the wake of the hurricane. I felt a profound loss for something I didn’t feel I could claim as my own.

I didn’t think I had the right to feel the despair I felt.

In the spring, I was able to return to Tulane and the city. My parents expressed understandable concerns about my health and safety, but I just wanted to go home. And that is when I realized that New Orleans had become my home. I did not lose anything in Katrina, as every true local did, but experiencing Katrina made me realize that I didn’t want to live anywhere else. As Chris Rose said, “You can live in any city in America, but New Orleans is the only city that lives in you.” New Orleans settled into my soul and has made me feel like I belong unlike any other place I have lived. 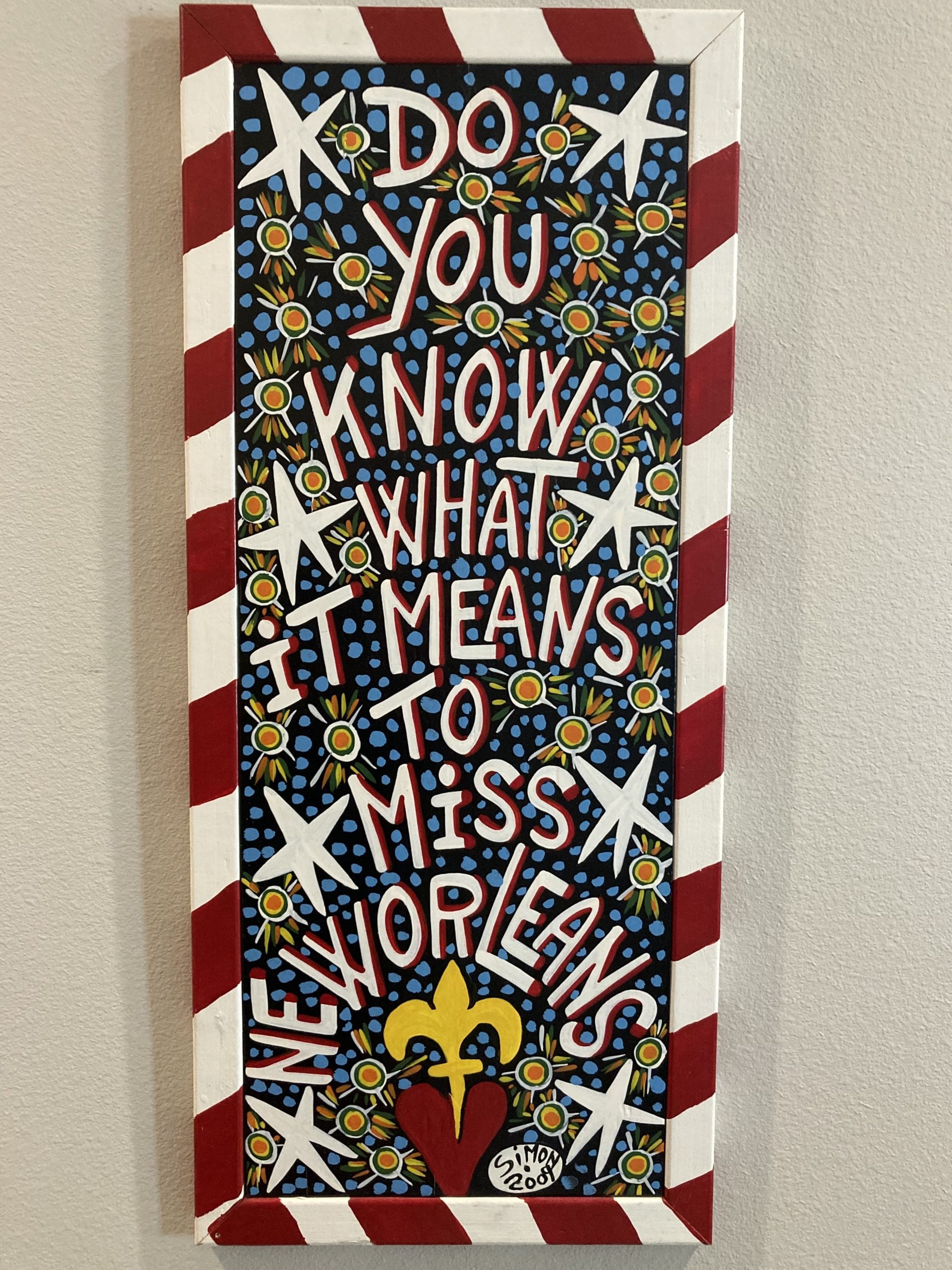 A few years after Katrina, I did leave the city for my husband’s first post-college job. The day we left, the family I babysat for all through college gifted me with an original Simon of New Orleans painting that asks, “Do you know what it means to miss New Orleans?” We have lived in two apartments and four houses since then, but I have always made sure to find the perfect place for it to hang. Six years ago we returned to the GNO, but the painting still hangs in my house, because I do know what it means to miss New Orleans.

And I know what it means to come home.