Thirteen years ago, I watched in horror and sadness as the waters rose around us and did not stop. It was by far the most devastating and traumatic experience I had ever been through, and I had never felt so broken hearted before nor after as I was in 2005. I had loved NOLA with all of my heart my whole life and never wanted to leave; to be forced out in such a gruesome way was more than my heart could take for many months.

We ended up in Houston in the weeks after Katrina and tried our best to begin our lives over while mourning what we had left behind.

I was with my family yes, but it felt like everything had just halted for us, left underwater and unfinished back home. In the immediate months that followed, it was decided that I would stay in Houston. I had nothing to return to, as both my jobs were now non-existent, and there was not a set date for UNO to re-open. So Houston became my home for the time being.

And as much as I fought it, as it was not “home” to me, Houston was good to me. Really really good to me. The people of Houston welcomed us Katrina refugees with open arms and big hearts and helped pick us back up and put us on our feet.

New co-workers became life-long friends; the ones you may not speak with for weeks or months, but pickup right where you left off when your paths cross again. In those early days where I felt so lost, and so alone, my Houston friends were there with a bottle of wine and nights of listening, laughter, and hugs. I began a new career in Houston and gained work experiences I had never had before. We travel back often to see my husband’s family and friends. We were just in Houston celebrating my oldest Houston friend’s wedding.

And how could I not appreciate the city where my husband was born and raised. We met at a dog park in 2007, and next month we celebrate 9 years of marriage. He has wiped away more Katrina tears on anniversary dates than anyone should ever have to. He has never tried to shut down all of the feelings that come with going through something so difficult; he has always been my listener and my biggest supporter. And when I got pregnant in 2010, he humored my immediate demands to head back to NOLA. I could not imagine raising a family anywhere but NOLA, and my parents lived here and in terms of New Orleans girls, that is end of discussion. Seven days before Christmas of 2010, with our then six week old baby girl, he brought us back home. 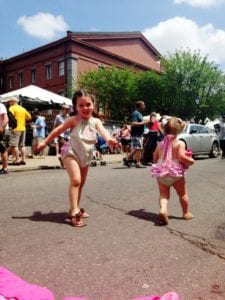 I won’t deny that New Orleans has its issues. Hello potholes, backward school system, and let’s not start on the politics. Even though we did not move home until five years later, those early years were still difficult and I know that there are people still dealing with the effects of Katrina. New Orleans never has, nor will it ever be a perfect city. However for me and for my family, the good overrides all of that. It is the most unique and interesting city I have ever been in, and it has a more distinct, special culture than anywhere else. NOLA is good for my soul and I just do not want to live anywhere else. I truly could not imagine raising our girls in any other city.

They suck the heads and pinch the tails; kick off their shoes, spread their blanket, and dance at festivals; holler loudly from atop their Mardi Gras ladder and want to ride in a parade just like their mama does when they grow up. 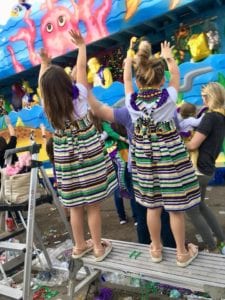 As heart wrenching as going through Katrina and dealing with all of it’s aftermath was, I cannot help but acknowledge that without it, I may not be where I am today. I would not have met my loving husband, we would not have our two sweet girls and our generally good life. I am forever grateful to Houston and all of the people I met along the way and who have stayed in my heart. Katrina brought me to my knees and there were many days that I thought I could not possibly recover. And I may not have been able to without the support of my family, friends, and husband and I appreciate every single second of support, love, and hugs along the way. While the storm may seem endless some times and more than you think you can possibly re-build from, the sun always come out again.

“She is a New Orleans girl, and New Orleans girls never live anywhere else and even if they do, they always come back. That’s just the way it is. This is where she belongs. End of discussion.” – Chris Rose.

Riding Down the Avenue

Letting Their Personalities Shine … Even in Mismatched Clothes