Growing up an Air Force brat, most of the places I’d called “home” consisted of people whose actual homes were in different states or even different countries. We were all transplants; our housing was temporary. For a very long time, even after my father retired and we settled in Fort Worth, TX, I still felt that way. I had not found a forever home.

I remember visiting New Orleans prior to Katrina. I spent New Year’s Eve in the French Quarter and watched with my fellow revelers as the clock rolled from 1999 to 2000 and, miraculously, nothing exploded. I left with a narrow view of the city: a smelly street with too many people, most of whom were drunk. It was loud and debaucherous. But the buildings were beautiful, the food was great, and man did they play good music.

When I met my future husband Dave, a native New Orleanian, things changed. He and his family showed me different sides to the city. Together we watched in horror as Hurricane Katrina took her toll. He introduced me to Jay’s Hurricane Images, and while much of the news suggested it wouldn’t hit the city head-on, Dave thought otherwise. He said he had a feeling, which I later learned came from years of watching hurricane projections. I learned a lot that weekend: what contraflow means, how powerful wind can be, what tragedy looks like. I’d seen tornadoes, fast and destructive, but I’d never seen anything like this.

We know what the weeks following Katrina looked like. I would never place my experience watching from a distance next to those who lived here and saw their houses destroyed or lost everything. My husband’s family spent months in Baton Rouge, in small quarters, while his young brother started school in a strange place waiting on a house full of water to be repaired. My fellow contributors have shared their stories as well.

In the Wake of Destruction 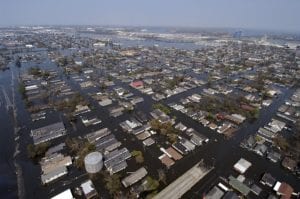 Back then, they called it “The Storm” (and some still do, although the moniker lost power after Gustav). There were blue tarps on most roofs. There were large piles of debris that had not yet been cleared. The roads … well, you know. Still, every person I met was eager to share their experience. Every open restaurant was welcoming. In no time I was in love. With the guy? Maybe (at the time I wasn’t sure). But with the city? Definitely.

Starting Over During Recovery

Deciding to move here was easy; jobs and housing were plentiful. Living here was more difficult. I got lost repeatedly, following a GPS that had no idea that some areas were un-drivable or closed or simply no longer there.

Still, the city had spirit. Do you remember the first Mardi Gras after Katrina? Do you still get goosebumps when you recall the Saints returning home and defeating the Falcons in a newly re-opened Superdome? I do. I wasn’t here for destruction, but I was a part of what happened next.

The City With Spirit 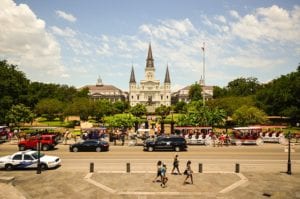 Event by event, street by street, and person by person, the City of New Orleans remembers and rebuilds. Each year we move farther away from Katrina while honoring its memory. For me, as a local (but not a native), I saw a city with attributes I wanted within myself. New Orleans is the biggest small town. Katrina taught me that, whether you were born up the street or bought your house last week, you are a part of the Spirit. Living here makes you stronger, more open-minded, and just a bit fatter.

Planning is Not Doing :: Three Tips for Meeting Your Goals...