I think Pinterest is a little bit like therapy. I live vicariously through the beautiful pictures, stylish clothes and craft activities. I pretend that I have the time to go to those places, the money to afford those expensive clothes and the talent to execute those crafts. All of those things don’t actually matter. All I have to do is to hit repin and somehow I feel like these things are attainable.

In reality I have a job, husband, daughter, blog and the million other things that any one of us reading this finds ourselves doing each day. So the fact is that most of my pins are just that: therapy.

Chocolate Chip Cream Cheese Breakfast Cookies – I liked these because they had chocolate in them for breakfast. What’s not to love? I was able to find the crescent sheets at Rouse’s. I don’t think that I wrapped it tight enough when I was rolling it but otherwise it was easy and yummy!

Cinnamon Roll French Toast Bake – This is a great recipe for anytime you are trying to feed a crowd like on family vacations. Also, it could be good to make on a Monday and let the family eat if for breakfast the next couple of mornings. It takes a few steps and has to bake for a while so plan for extra time if you are waking up and making this.

Bow Tie Fiesta – This is a very easy weeknight meal and can be modified for your family’s preferences … like it spicy? Keep the jalapenos and/or buy spicy salsa. Don’t like olives? Omit them. Want healthier? Use lean beef or even turkey.

Easy Garlic Chicken – Here are a few modifications to this recipe: I used chicken tenderloins instead of breasts, and I am trying to eat healthy this year so I halved the brown sugar to use 2 tablespoons. I used 6 cloves of garlic, and it was awesome. I believe you can never have too much garlic but to each his own. Note: 500 degrees is the perfect temp to throw in a bunch of veggies to roast as well. I did green beans, and it was a great pairing.

Crockpot Lasagna – So I admit that I was skeptical that the noodles would cook, but they totally did. I made it with turkey sausage and ricotta, and it was yummy. I recommend using more sauce than it says because I think that is what keeps it moist if you have it in the crockpot longer than four hours. It made lots, so I ended up freezing half.

Sweet Baby Ray’s Crockpot Chicken – Anything that goes in the crockpot that is easy and tasty is a winner. You can even toss the chicken in frozen. Excellent for weeknight cooking.

Cupcake Pizzas – A kid favorite to make and eat for sure. This was super easy: all it takes is breaking up refrigerated dough for the cupcake mold and then toss in whatever toppings you like. I actually think this is a great solution for families who all like differnt toppings. This could also be a fun idea for a sleepover or kids’ party to set up a toppings bar. I never did find the little pepperoni so I just cut up the standard sized pepperoni.

Crockpot Enchilada Soup – Again, I am a huge fan of the crockpot. It gives you that homemade feeling when you don’t have the time for homemade. This is a recipe that I made and delivered for a friend who just had a baby. I tasted it before I headed out the door with it and I will definitly be making this one again.

Tomato, Onion and Cucumber Salad – Yummy! Very fresh and easy to transport. My daughter loved to eat the tomatos out of this. I would imagine this would be great for a summer BBQ or easy to take to a pot luck.

Pizza Bites – I am putting this as a side because of a modification I did. I used the sliced frozen squash instead of the zucchini. I grilled it in a pan and then topped it like normal. I did this because of the smaller size for my daughter. It worked well and was an excellent way to sneak a veggie in! This could also be an appetizer option or a new take on bruschetta.

Funfetti Dip – A great dessert for kids and adults who wanna be kids. Picture dipping a animal cracker into cake batter: enough said.

M&M Cookies – Although these cookies were Christmas themed, it would be fun to change out the M&M colors for other holidays such as Valentines’s Day, Easter, St. Patrick’s Day or Halloween. We recommend pushing M&M’s onto the dough after you’ve rolled it (as pictured above) for a much prettier cookie. These are divine, as many friends attested!

What’s your favorite Pinterest recipe? Or, any we should all avoid? 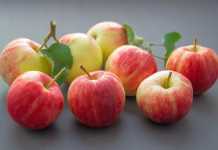