Motherhood is filled with ups and downs for everyone. Whether you have one kid, two kids, or ten kids, finding the balance between mother/wife/work (even if you are a stay at home mom – a legit job and probably the hardest one out there) is difficult and stressful and exhausting. If you are a single mom, I can imagine it’s even harder. I am not saying that one plight is more difficult than another. We moms are all in this together, or at least we should be. Life is hard enough to judge each other. 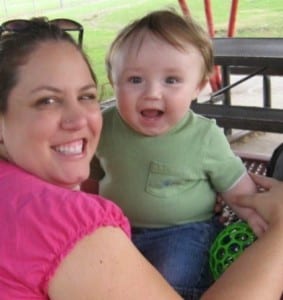 I have a child with Autism.

When Ethan was 2 and his sister Anabelle was 6, he was diagnosed. My husband Art and I handled it different ways. Women seem to want to talk about things to death. I think it’s our way of figuring out emotions. Men typically do not want to talk about the hard stuff. They are better at compartmentalizing and can seemingly do everyday things without it disturbing their lives. Maybe it’s built in because for such a long time that is what they had to do. Of course, they do think about it when they are still and silent. We know this deep down. It’s the talking that they just do not want. At the time of learning the world of Autism lingo and therapies, we were very much on two far away islands. I never really blamed him for this, but I felt very much alone.

At the time, I was a Stylist for Stella and Dot. I handled mommy chores throughout the day and had social selling parties at night. And it seemed that every time I had a significantly crappy day with Ethan, by having a party with wonderful groups of women, I was able to let off some steam. The money didn’t hurt either.

Ethan would often hit me, scratch me, yell at me, and would throw large, plastic heavy toys at me. He would turn on me without warning. One second, he was snuggling and sweet, and before I knew it, I was bracing myself for punches. (How he instinctively knew how to punch, I’ll never know.)

Art and I worked on communicating effectively over many years. We loved each other dearly and got along fine, but when talking about Ethan, we would butt heads. One thing became very clear: He did not understand how I could be constantly physically assaulted by my young son when he was 3, 4, 5, and 6 years old. I did not understand how or why he did not get it. I refused to hit Ethan back because it would never work. When he is in the middle of a meltdown, he does not see or notice anything. And if he did notice, I knew he would model the behavior. I did not want him to think that hitting was ever okay. He is freakishly strong and would leave bruises on my arms and my chest despite my attempts to stop him. I loved him and understood that this was not my child. There was and is always a reason for him to act out. He could be overstimulated, noises could be amplified, he could be scared, hurting, or hungry. I knew once I got to the source, I could fix what was wrong. My poor Anabelle would go to her room and close the door because watching the battles was upsetting. It killed me inside knowing that these would be her memories someday. I just attempted to soldier on. Things would get better. 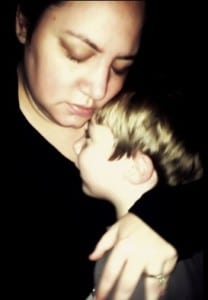 And then came the day.

The worst day in my life of parenting. Ethan was 6. We were walking into Children’s Hospital for his weekly speech therapy appointment. We had done this hundreds of times since he was 2. And for some reason when we got to the middle of the hall, he would no longer walk. He sat down. He gritted his teeth and began to scream. I struggled to get him up, but he made fists and started beating my arms, my chest, and flailing all over the place. I picked him up and leaned against the wall as he continued to hit me. I tried soothing him, but he was in a rage. My sunglasses flew one way, his sippy cup another, and I just held him tight and sobbed. He kicked me in the stomach and in my shins. I was hysterical. I could hear people walk by. I was embarrassed and hurt, both physically and emotionally, and I could not stop crying. I do not know how long I held him. At some point, he starting crying too. And we both just clung to each other for dear life in that hallway. My hair was messed up, my shirt was ripped, I had makeup dripping down my face. One nice woman put my sunglasses by my feet. One man did the same with the sippy cup. I only heard them. I never saw their faces because I couldn’t see through the tears. After what seemed like an eternity, we walked into the speech office to find that we had completely missed the 30 minute session and was way past time to go home. I cannot imagine what we both looked like in that waiting room. I try not to think about it.

I went to bed early that night, and the next day, I quit being a mom. I woke up feeling that I had nothing more to give. My heart was still broken. It was like dealing with a death – I was so emotionally tired from crying. In the morning, Ethan dove into my lap and held me tighter than he ever had before. He told me he was sorry, and I told him I forgave him without saying a word. The silence said it all. We loved each other. I was exhausted and lethargic. All day, as I stayed in bed, my arms got black and blue. I literally could not go one more second. I could not manage to smile or be the good mom I should have been. I quit. It was truly the only day of my adult life when I felt like I could run away. And I was too tired to even feel guilty about it. 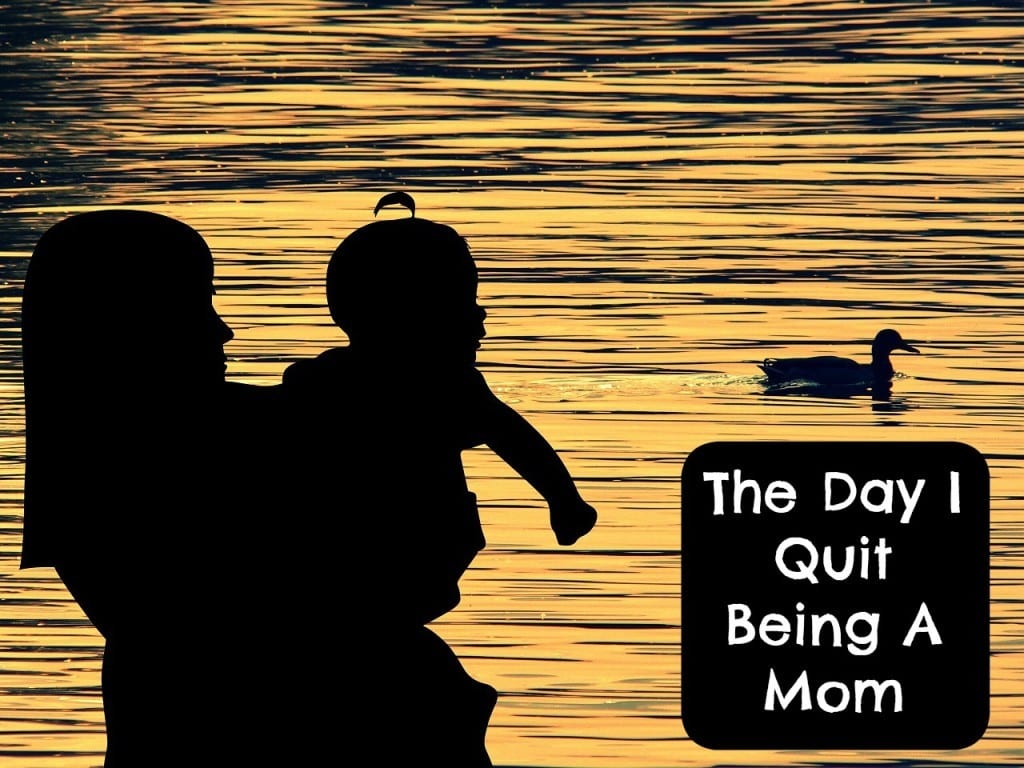 Art packed the lunches and brought the kids to school. He picked them up, did homework, played with them, fed them, got them bathed, teeth brushed and in bed, all while doing his full-time job. I was a useless ball of emotion. I did nothing to help. I do not even think I saw the kids more than 30 minutes that day. A part of me felt like I had snapped. Send me to the looney bin and throw away the key. I wanted to be checked into a rehab center for exhaustion and paint and chant and do yoga and walk in the garden all day like the celebrities do. This is literally where I was.

Thankfully, Art was only mildly annoyed. He understood, in his way, why I quit. He took over and handled everything magically. He was amazing and gave the kids all the love and fun that they were used to.

The very next day, I picked up where I left off. I was back to being fun, helpful, understanding, and stern. I was Mom again. My kids never showed any signs of trauma from that day that I quit. I held guilt in my heart about it for years, though. I just tried to out-mom myself as much as I could. I made sure Ethan had every opportunity and Anabelle had every ounce of attention she needed to thrive. I made time for special adventures for she and I so she never felt like she missed out on something. I always made time to sit on the floor and play with Ethan. I began making an effort to say “yes.” Yes to Play Doh and painting, even when I know there would be a mess. Yes to running in the sprinkler in their uniforms. Yes to sneaking out late at night to spend time at the bookstore. Yes to hide and go seek even when I don’t want to. Yes to donuts and drives across the Huey P. long Bridge just because they think it’s fun. 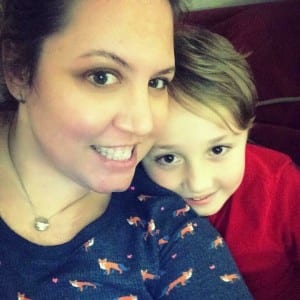 It has been years since I quit. It never happened again. I started a wonderful business with Thinkerella. I am an example of what hard work and perseverance can do. I can show that it’s okay to make mistakes, just as long as you learn from them. I live what I preach and show what it’s like to never give up. Anabelle is amazing in every way. She is a model student and the best sister a brother could ask for. Ethan is getting better with every passing moment. Today his outbursts are few and far between. He loves school and is making friends. Proud does not even begin to describe how I feel. I balance family and work and motherhood very well these days. Art and I are going on actual dates. We work together as a team to address issues and problems. And all four of us, I believe, are the happiest we have ever been.

I hope that by sharing my story, other moms with similar experiences may let go of the guilt that comes with quitting. I know now that it’s okay to “quit” once in blue moon. I forgive myself.

Sometimes we just need to recharge, we need to heal, and we need to ask for help. There is no shame in that. 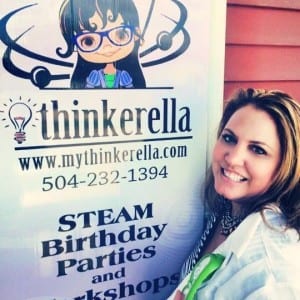 Cherie attended Ursuline Academy and Northwestern State University in Natchitoches, LA. She has a background in journalism and wrote scripts for an educational software company when she was younger. She is a vocal Autism mom and advocate. She is a mom of two children, Anabelle (12) and Ethan (8). In March of 2014, Cherie launched her own company called Thinkerella™, a science lab for kids ages 3-13 with non-toxic, safe, and fun STEAM-based activities (Science, Technology, Engineering, Arts, and Math). Thinkerella™ offers birthday parties, scout sessions, workshops, summer camps and after-school sessions for both girls and boys (Thinkerfellas) in the New Orleans area and just opened a second location in Mandeville. Last school year, the business launched its ThinkerKids™ after-school program and completed 32 programs in local elementary schools in the Greater New Orleans area. This year the goal is to double that. Since opening her doors, over 2000 kids have enjoyed learning through her program. Cherie was named 2013 Mom of the Year by Nola Baby and Family Magazine, was named one of Gambit’s 40 under 40 in 2014, and Silicon Bayou’s Top 100. She recently was awarded the Millennial Award for Business by Social Renaissance.

Heading Back to the NICU {Showing Appreciation for the Nurses}

10 Reasons You or Someone You Know Might Need an ADHD...