Disclosure :: this meal was compensated by Carrollton Market, but as always, all opinions are my own.

If you knew your next meal would be your last on Earth, what would you choose? Would you opt for something nostalgic like your mother’s pot roast or maybe something decadent like filet with lobster slathered in truffle butter? I’ve been asked this question before and my answer might seem strange to some … it would be the chef’s choice at an amazing restaurant that I’ve never experienced before.

My husband and I love to eat out and experience new restaurants. Anytime we try a new place, I always ask the waitstaff the same question—what’s your favorite thing? Nine times out of ten, I order what they suggest, unless it’s something like gazpacho, because honestly—when has chilled tomato soup ever delighted your taste buds? 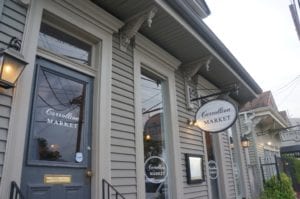 We booked a babysitter and headed to Carrollton Market in the Riverbend for date night, and we got to experience a nine course tasting menu of the chef’s choosing. It was like a dream come true! We met Chef/Owner, Jason Goodenough, and he welcomed us to his beautiful space. He asked if we had any aversions or food allergies. Yes! My husband hates cucumber and I detest dill. He assured us that wouldn’t be a problem.

The first course was presented and I peered down into a cup of tomato gazpacho. I was skeptical. The 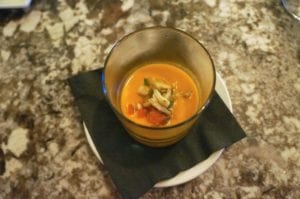 chef explained that their gazpacho is unique because of the process of first cooking fresh tomatoes to soften their flavor and then emulsifying them with olive oil. The soup is served chilled and garnished with Louisiana crabmeat, watermelon, and cilantro. Only then did I remember that watermelon is the only other food that I hate. I know … it’s weird, but watermelon tastes like wet Styrofoam to me. But, I’m up for trying anything, and I certainly didn’t want to be rude, so I took a bite. I think it’s safe to say that if I had been left to my own devices, I would have read the description of this dish on the menu, wrinkled my nose, and kept reading … but after one bite of this seemingly ordinary soup, I was convinced that this chef has magical powers. The emulsification with the olive oil gave the gazpacho a rich, velvety texture, but it maintained a fresh and light finish. I realize that “rich” and “light” are contradictory descriptors—I’m telling you, it was magical. Cooking the tomatoes brought the acidity down to a more palatable level, and the garnishes, even the watermelon, brought everything together beautifully. I’m still not sure I’m a fan of gazpacho, but I’m definitely a fan of this one!

Next up was one of their signature dishes that I was told never leaves the menu: Oysters Goodenough. Unless you know that the chef’s last name is “Goodenough,” you might think that the title of the dish is down playing how great the flavors are, because they are not just good enough, they are in fact great!  I’ve had oysters a lot of ways— raw, fried, charbroiled, Rockefeller— but I’ve never had them wrapped in smoky bacon, flash fried, served over a bed of creamed leeks, and finished with rich béarnaise. It doesn’t get more decadent than bacon, heavy cream, and fried oysters topped with saucy goodness, but the smoke of the bacon really cut through all of the rich flavors to balance the dish. This appetizer is indeed worthy of the chef’s name!

We tried three more appetizers, the tomato and crab salad, the braised pork cheek, and the crawfish and 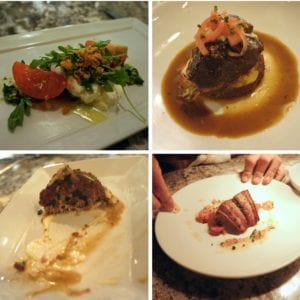 pork croquette, and each dish brought something different to the table. The salad was light with a peppery bite from the arugula, the apple compote that accompanied the pork cheek brought an element of sweetness, and the croquette with pickled vegetables played the spicy and sour notes. Sadly, a complete picture was not taken of the croquette because it looked so appealing that my husband just had to dig in before I was able to snap a photo!

The entrees brought a twist on two New Orleans classics—creole cream cheese and bread pudding. Their house-made pasta was perfectly cooked and included a sauce made with creole cream cheese, asparagus, ham, and crab. It reminded me of an elevated pasta carbonara, and it was delicious! The pan seared red fish had a beautiful crust, and it was presented on top of a savory garlic bread pudding. 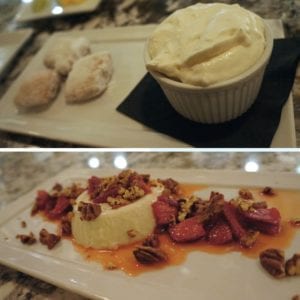 My husband and I disagreed on our favorite dessert. My favorite was the chocolate pots de crème that was served with warm sweet and salty beignets, and he preferred the buttermilk panna cotta served with a Pontchatoula strawberry compote and pecans. Our preferences were strange considering he is normally the chocolate person and my favorite dessert is strawberry pie, but I wasn’t upset that he left more of the pots de crème for me!

The overarching theme of the meal was elevated simplicity. There was nothing stuffy or pretentious about the food, the waitstaff, or the décor. Every bite I enjoyed brought a familiar flavor, but it came with a twist that turned up the volume. Instead of describing the food in a flowery and overly embellished manner, I’ll summarize by saying it was simply a great experience, not just good enough, but truly great!

Last meal on Earth or not, Carrollton Market is a must-try! Take my advice, order the gazpacho!

What My Toddler Taught Me About Compassion