I have shared with you my love of everything New Orleans, especially my love of Mardi Gras. It is not a new found passion. No, it is a life long one. As a little girl, I watched float after float of gentlemen roll by and dreamed of experiencing a day in the life of a masked Mardi Gras rider. There was nothing I could imagine to be more exciting than being perched high above the revelers as I threw to them all of the trinkets their hearts could desire.

My first ride with the Krewe of Muses occurred during the first Mardi Gras of the post-Katrina era. To describe what that night was like 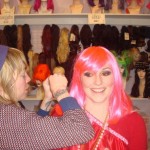 is impossible. It combined something I had dreamed of doing my entire life with the emotion of a very grateful New Orleans community who thanked us continuously for riding. They weren’t just thankful for the throws we sent their way; they were grateful that we were a part of returning their lives and their city to normal. There was this moment. It was the perfect moment. I’ll never forget it. As our float pulled closer and closer to the corner of St. Charles Avenue and Napoleon, you could literally feel the excitement gaining steam. The moment we made the corner, and I saw the largest crowd I’ve ever seen jubilantly welcoming us into their Mardi Gras memories, tears sprung to my eyes. To be a part of this amazing and unique tradition is something so special.

That ride was eight years ago. Each year as I log on to pay my dues and order my beads, I wonder if this will be the year that it loses its luster. And each and every year as the big day approaches, I wonder how I ever thought it could. You see, our ride is more than four hours on a float. It is an entire day of connecting with amazing friends and celebrating the creativity and power of women. In a little over a decade the women of Muses have created a Krewe that strives to make an impact in the community as much as we do on the parade route. It’s a group of women who are as diverse and dynamic as any you will find. And in just two days, I’ll be spending the day being entertained and inspired by all of them!

At around 9:30am on Thursday, some of the girls who ride on my float arrive at my house greeted by mimosas and king cake. It is here where the beautification begins. Imagine a vanity topped with glitter shadows and false eyelashes, wigs and fishnets, boas and satin gloves. After all, you have to transform attorneys, CPAs, teachers, police officers, philanthropists and moms into goddesses. Once we are appropriately dolled up, we head downtown for lunch. 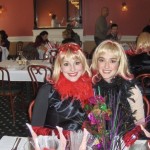 Galatoire’s. It is a place as filled with pomp and circumstance as Carnival itself. Our meal begins with the most delicious oysters en brochette (fried oysters that have been wrapped in smoky bacon). After a round of bubbly, we dine on filet topped with bernaise and local crabmeat that is paired with creamed spinach and soufflé potatoes. It is a meal truly fit for Carnival  queens.

How else would you go from Galatoire’s to the Contemporary Arts Center other than by way of a pedi cab parade? There is nothing more fun than to have a pre-parade before the pre-party leading up to the parade. While it can be a little chilly, it sure is fun to toss throws to happy tourists along our route. Our float comes together to meet outside of the CAC so that we can proceed into the pre-party together. As we walk in, we hope to impress the other riders and the judges with our always elaborate headdresses. 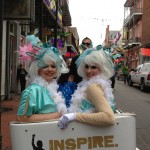 You see, each float designs and executes their own headdresses. The winner of the contest gets to ride in the title float (the first float to ride) in the following year. Just two years ago, my float was selected and when they called out our name, I swear it sounded like a high school gym would sound if Justin Bieber walked into it.

At the pre-party we are surrounded by women dressed head to toe in glitter and sparkles. We dance and laugh and toast to another amazing year. And just at the peak of the madness, you begin to hear the whispers – “It’s almost time,” “They’re almost here…” There is no sound as electrifying as that of the sirens of the NOPD’s motorcycle unit. It is the sound that tells you that the show is about to begin. We are led out of the CAC and onto our floats where we are surrounded by the year’s throws. Led by the NOPD, our floats drive down Tchoupitoulas Street to make their way to the start of the route.

As the sun begins to set over the river and the day comes to an end, we know that our night is about to begin. At the start of the route, our parade has a mobile spotlight. No matter what float number you are assigned to, you can see that light’s brightness standing stationary in the sky. It becomes our North Star for the night. The moment we see it move for the first time, we know that our ride will soon be under way.

No matter how many years I’ve ridden, I still become emotional as our tractor starts its engine. It indicates that the magic is about to begin. Along the route we hear shouts of “A shoe, a shoe!;” “Throw me something sister;” “Hey pretty lady!”  They become the soundtrack to our ride. There is nothing like seeing the excitement on a reveler’s face when you select him or her out of the crowd and hand them one of our treasured shoes. You can often hear their squeals for several blocks. 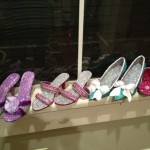 It is very much how I imagine Cinderella felt when Prince Charming found her in the crowd. And how fitting, that girl had great taste in footwear. Speaking of footwear (and yes, glitter), I thought I’d leave you with a sneak peak into my 2013 Krewe of Muses shoe collection. I’ve spent hours glittering and trimming and bedazzling 30 shoes that will soon make their way to Float 10, Sidewalk side.

I hope that you are performing your best rain dance as you are reading this. In the words of Fanny Brice in Funny Girl, “Don’t Rain on My Parade!” And in the words of the Krewe of Muses, “Happy are Those Who the Muses Love.”

Will you be attending this year’s Krewe of Muses Parade? Have you ever caught a shoe? What was your secret to getting it?

Would you like a chance to win one of these Mardi Gras collectibles? Leave a comment telling me about your favorite parade, and I’ll randomly select a winner who will receive a glittered Muses shoe and a few other Muses lagniappe items from the 2013 throws!