Of all universal toddler truths, we can agree on this one: all kids love to dance! They immediately bounce, jump, and wiggle the second they hear, or feel, music. We are lucky to live in a town that offers music so regularly and routinely that none of us ever have to grow up and out of the habit of moving to a beat. Best of all, there’s little judgment on grooving here, as long as you keep smiling. Kids have that down, too.

And what’s easier to dance to than a brass band beat? 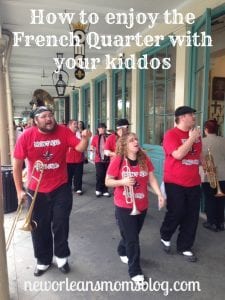 Locals and visitors alike seem to understand this pumping, pulsing heartbeat of the city and take to it like a fish to water when a second line comes their way. The easiest parade to join is the one with a brass band.

In the French Market District, there are various types of music that can be heard on a daily basis. From street performers at Café du Monde, including saxophonists and trumpeters to The Market Café and Gazebo Café featuring daily live jazz and blues bands made up of local musicians, and the Farmers and Flea Markets, which are especially populated on weekends with a mix of bluegrass and brass bands set up to play for tips.

Scheduled events include regular brass band music, as well as the occasional opera concert and children’s music concert. These could occur inside the intimate (also known as air-conditioned) space of the New Orleans Jazz National Historical Park or outside at the Dutch Alley Performance Pavilion or at the small farmers market stage, which is also used for cooking demonstrations and other presentations. Even better, you may just find a brass band coming your way while you are shopping or dining or strolling!

Most special events at the French Market involve a brass band that breaks out into a second line through the French Market District, as it is such an accessible way for all ages to experience the music, the area, and one another. For example, this weekend’s first annual CURRENTS: Mississippi River Festival will begin and end with second lines full of meaning and history. The morning second line at 10 a.m. will include a Mark Twain and Jean Lafitte character, while the afternoon will feature a more “sacred second line” honoring the River, and will include Native American dancers and musicians. 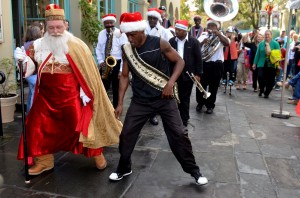 The annual Saint Nicholas Day Fair, which occurs this year on Saturday December 7th, will include its signature St. Nick second line, with Santa leading the way, and if you think you’ve seen it all, check out the annual Easter Bunny second line, a fitting NOLA tribute to the traditional Easter parade.

We don’t want the word to get out too much, but it is true. The French Market has the ONLY free public restrooms in the lower French Quarter. This is paramount for parents who need to know that if their little boy or girl is bouncing around to the beat and staying hydrated too. They can pop into one of two public restrooms that are open, maintained, free of charge, and SAFE.

Yes, safe! The French Market not only has its own maintenance staff, but it also has its own security staff. This makes for a family friendly atmosphere you may be hard pressed to find in other French Quarter areas. If a member of the security team is not visible on the property as they make their rounds, a security guard can always be found stationed at their command center on the first floor lobby at 1008 North Peters, right below the French Market administrative offices.

Bring your family down to the French Quarter this weekend for what’s sure to be a good time for the whole family! 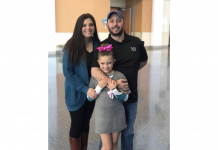 Our School Community Is MADD :: We Love You, Abby

Capture Your Family This Summer With Adventure Stories