I had the unbelievable opportunity to attend the the premiere of the movie ‘Gleason’ (a hit documentary at the 2016 Sundance Film Festival) at the Orpheum theatre last week. While the event was filled with Saints players, including Drew Brees, the person I most wanted to see and hear from was the subject of the film – Steve Gleason. 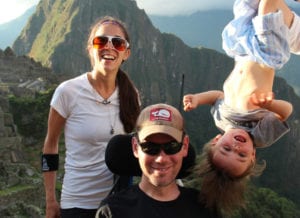 If you’re unfamiliar with his story, the former Saints player became most well known for a blocked punt against the Atlanta Falcons. But it wasn’t just any game. It was the first game played in the Superdome after Hurricane Katrina. For New Orleanians, it was an amazing symbol of rebirth for our city. Fast forward to 2011, when Gleason was diagnosed with ALS, a terminal neuromuscular disease. Most patients with this disease don’t live more than 2-5 years after diagnosis. Six weeks later, he learns his wife Michel is pregnant with their first child. He begins personal video journals for his unborn son, which will eventually will become this film. 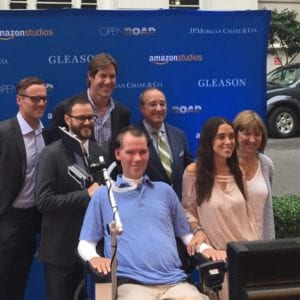 The way he chooses to handle his life, traveling, living to the fullest, and starting Team Gleason, he has become an inspiration for so many. My family has followed his story for another reason as well – because my father has lived with limb girdle muscular dystrophy for about 40 years. While his progression is very different than that of an ALS patient, the problems the disease brings are very similar. Watching the film was difficult at times, thinking of how my dad must have felt when he lost the ability to walk. To carry me. To play in the yard with me as a child. To be the husband he imagined he would be. To feed himself.

Gleason and his wife also bravely shared some raw, difficult footage of the daily struggles he faces. I loved that they were so vulnerable and open, showing people what its like not only for the patient, but also the caregiver. It’s a disheartening, exhausting role to care for a loved one with neuromuscular disease. They have trouble breathing, swallowing, controlling their bowels. They eventually become total patient care, 24/7. The film shows not only his drastic, rapid progression, but also everything they do to make the most of his life. While saddening, it’s a great tale of love, family, and triumph of the human spirit. 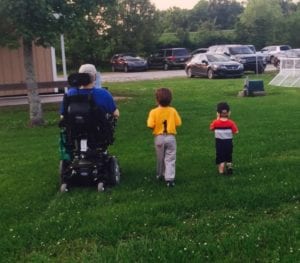 Imagine a world without neuromuscular disease

While my father’s decline has been extremely tough, especially for my mother, the film made me grateful for all the good years we’ve had with him. He has good days and bad, and there’s no picture of what his progression will look like since his type of MD is rare. I am grateful that someone of prominence like Steve Gleason has was able to bring awareness to neuromuscular disease.

I urge everyone to see the film when it hits theaters July 29 (locally at Canal Place and Elmwood). There won’t be a dry eye in the theater, but you’ll leave with a new outlook on life and hug your loved ones a little tighter.

I Had a CBAV Delivery and It Wasn’t Part of my...