We are lucky enough to live in one of the most significant coffee meccas in the country, but how do we choose where to go? One could argue that your choice is based on your personality and preferences. Others could argue that those things have nothing to do with it and that these “what XYZ says about you” lists are purely for entertainment.

We can all be right; see below:

You’re either: A. Someone who enjoys a solid but not fussy hot espresso beverage or-
B. You love frozen coffee beverages and you think it’s fun to say “Grrrrrrranita…”

You don’t usually drink espresso-type coffees, but- Hey you’re here, might as well try it, so you listen to what the person before you ordered. Eh, why not, that’ll work.
“I’ll have the same…”

Ah, the “Mochassippi”- when you want a milkshake or ice cream, but it’s too early in the morning for that to be socially acceptable.

“Ok, where does the study group want to meet next time?”
Person 1: “Somewhere with good coffee!”
Person 2: “But I want to eat something…”
Person 3: “Well, y’all, we can’t go to like, a REAL restaurant, we’d disturb the other patrons.”
Barista at French Press: “Why do y’all do this every time, you’ve met here every Sunday afternoon for four months…ORDER FOR MIKE!!!!”

Your great-Grandmere on Maw Maw’s side drank Cafe Du Monde, your Uncle T-Joe and his little fluffy poodle Poostache (gawd-res-his-soul), THEY drank Cafe Du Monde, that neighbor across the street who they all said was actually Elvis, he wasn’t dead, HE drank Cafe Du Monde, and we all drank if for every field trip to the quarter for generations, now if that doesn’t mean it’s good, then who would like to tell me what good means, please.

You can’t afford a trip to New England, but you want to get that Boston “feel”.

You probably prefer iced coffee, and you get almost as much of a rush from gambling that the 10-car line will clear out in one of their famous blitzes of barista teamwork as you do from the caffeine.

You have never even heard of any of the other coffee places on this list, and you live within walking distance to this, the only coffee shop you know. You buy your organic sustainable locally sourced mustache wax a few doors down. (Psst- you’re a hipster, that’s what I’m saying)

You’re not drinking this beverage to wake up. You appreciate the craftsmanship of these works of culinary art as much as any true connoisseur. Perhaps you normally go for craft beer, but it’s lent and you’ve given hops up but got hooked on the OTHER kind of brew- good job, now next year you’ll have to give up coffee.

You’re not reading this. You’re driving a truck or building something, like a true American.

You’ve saved every rough draft of every research paper you’ve ever written, and you like using speakerphone on your cell when it’s only you talking. If you don’t have an easy-to-pronounce name, you’re able to make one up quickly.

All of your friends are cool, but you are by far the coolest. You support local businesses without really even trying. You never forget your reusable grocery bags in the car, and you can parallel park like a boss.

You have a 13-year-old dog and drive a 17-year-old vehicle. You’re a person who appreciates a warm smile and a polite greeting and if someone is rude to ANYONE behind the counter, you’re going to say something that will make that person regret that choice.

You have a little bit of an identity crisis, but you make it work for you. You mumble your order on purpose to keep ‘em guessing and tip big when they get it right.

Will anyone suspect that you are secretly an Italian princess? That your father was deposed from the throne of his tiny Tuscan kingdom? Here, at least you feel at home and comforted. “One more tiramisu, per favore…”

You’re in Metairie, and OMG, this is that place that Ms. Debbie took me to with the insane frozen drink that is so freaking good isn’t it? What’s in it, but don’t tell me what’s in it because it’s tons of sugar isn’t it, but wait I just ordered it saying “It’s like the frozen coffee form of crack” and the barista knew exactly what I was talking about!

You want to be awake NOW, but also want to be able to take a good long nap right after the game.

You’re on a mission to prove that “Multiple locations” does not necessarily translate to “Not high quality”. You want to go someplace where the coffee is good even if you have to drink it black.

Wait, where did all these other coffee shops come from? You’ve been drinking coffee at Neutral Grounds since college, why do we have so many others now?

You have out-of-town guests.

Do you agree/disagree? I didn’t even include some of my favorites…(cough, cough- Bean Gallery-) Please comment with your favorite coffee shop BELOW! 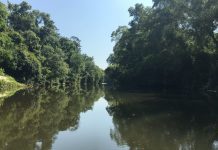 Calling 911 in a Domestic Violence Situation: What You May not...