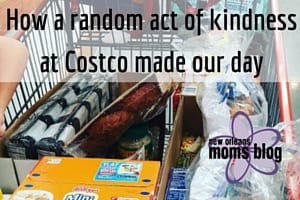 About a month ago, my husband Josh dropped me off at the doctor on a day when my kids were out of school. Rather than try to entertain them in a waiting room for a couple hours, it was his plan to take them to Costco. He would pick up a few items (which if it was me, a few items would quickly become $200) and treat them to what he considers one of the best lunch deals around. He’s a simple guy and really appreciates a good hot dog value meal. While waiting in the check out line, our 4 year old Jude, started the obvious potty dance.  If you’re a parent, you know exactly the moves I’m talking about. He announced that he had to pee NOW and proceeded to make a dash for the bathroom, leaving my husband, 1.5 year old son Elijah, and the shopping cart behind. Josh said he quickly grabbed Elijah while a lady in line behind him said “Go ahead, I’ll hold your place.” He yelled thank you and took off for Jude.

After a difficult public restroom break (isn’t it always a challenge?), he returned to line to find that not only had this woman held his place, but she also loaded his items on the conveyor belt. She explained that she was also a parent of a young child and totally felt for his situation. Her kindness went a long way, making it the first thing Josh told me when he picked me up from my appointment. Hopefully, this stranger also helped crush any fears he would have of future grocery outings with both kids alone.

A chance to pay it forward

It was a small act that had a big impact on the day. I was grateful to this complete stranger for making my family’s day a little easier, even though I wasn’t there. So when the opportunity to pay it forward came this week, I knew it was my turn to help someone else. I had taken the boys to Chick-fil-a for dinner, to break up the monotony of a week off school. We were seated in a booth next to another mom alone with her two young kids when the youngest loudly announced her need to potty NOW. I heard the mom saying everything I usually say in that situation, “you just went before we left the house. Why do you always have go in public?  Are you sure you have to go right now?” It’s funny how a simple thing like the call of nature of a pre-schooler can just bring people together. She seemed torn as her other child was happily enjoying his nuggets and refused to accompany them to the bathroom. So I turned around, told her I didn’t mean to eavesdrop but that I had been in her shoes and would be happy to keep an eye on him (we were in booths right next to the bathroom) and their things while she took her daughter to the restroom. She graciously thanked me and rushed her youngest off.  So when my youngest started yelling about the fire truck outside, she laughed and we shared stories (Elijah cannot properly say ‘truck’, but instead a curse word that rhymes with it. So he kept yelling ‘fire truck’ except it doesn’t sound like that… You get my drift).

These two instances got me thinking that it really does “take a village,” but not just with family or close friends. It also takes parents helping other parents, strangers helping strangers, sometimes in seemingly insignificant things. It could just be relating to one another or lending a helping hand, but if we all could pay it forward in this way, we could form our own extended “parents village.” Heck, I might even decide I could have more than two kids.

How has someone you didn’t know well helped you? How have you helped someone else?