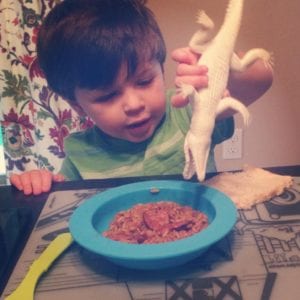 My kid eats slow. Let me back up. My kid eats so slow that he probably doesn’t know that most meals prepared are meant to be enjoyed warm. He eats so slowly, the idea of “breakfast” in the morning, “lunch” at midday, and “dinner” at a reasonable time of night is completely lost on him.

In the morning, he eats breakfast at such a snail’s pace that my husband has to sit next to him and literally put food in his mouth to get him to eat while keeping on a schedule. I’m serious! If we want to leave at any decent hour, we just take the Eggo in the car because he won’t be finished with it any time soon.

We have to strategically pack his lunch so he has time to eat most of it. I thought he would enjoy eating the school lunch, but waiting in line takes away precious minutes. He has thirty minutes to eat before his thirty minute recess, but you’d think he was at a military boot camp with only ten minutes to shovel his sandwich and yogurt into his mouth. Anything more and he won’t get to it. I have the lunch box leftovers to prove it. 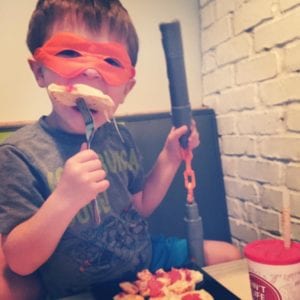 Over the summer and on the weekends, he eats so slow that by the time he finishes breakfast, it’s almost lunch time.

We’ve tried everything. Reminding him to put food in his mouth — “Take a bite!” Letting him watch TV so he’s sitting in one spot (yes, I know this is frowned upon and one of the leading causes of obesity, or something). Taking away distractors (see, TV doesn’t work anyway). Bringing food with us in the car. Actually putting the food into his mouth.

Last Saturday we had burgers at 6:30. He didn’t finish until nearly 10 pm! We don’t leave any restaurant without a To Go box because, you guessed it, he never finishes eating while sitting at the restaurant.

I’d like to think he’s a future food critic, honing his craft, evaluating each and every bite. However, there’s just no way he could possibly form that much thought about Trader Joe’s Mac and Cheese or the Pizza Lunchable. I know it’s officially called grazing, but this grazing is driving me crazy. And, I have no answers. Just a rant.

I’m sure one day I’ll lovingly look back on this time in my life when I fretted over how much he’s eating and waiting for him to finish his dinner. I know the days when he’s eating us out of house and home are coming. But, please don’t ask me to enjoy this moment.

Read More Books (Tips When You Have No Time or Energy)

10 Spots for a Girls {& Date} Night on the Northshore