If you are looking for things to do in New Orleans with kids, Jazz Fest is absolutely an event to consider. Happening over the course of two weekends in late April and early May, Jazz Fest offers some of the world’s best live music, the most delicious food and is absolutely a family-friendly event if you would like it to be (though you can always ditch 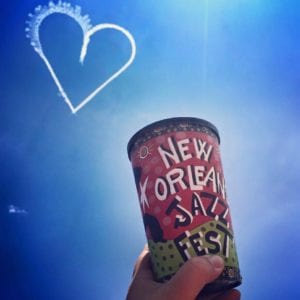 the kids and leave them with a sitter, if you prefer). Whether you are traveling to New Orleans with children or live here full-time, New Orleans Mom hopes to make your time in the city joyful and carefree! Sometimes we have less than stellar experiences, and we share those, too…

The Spirit of Jazz Fest

Jazz Fest is and always has been my most favorite event of the year. I love attending all of the local festivals throughout the year with my family; however, the New Orleans Jazz & Heritage Festival has always been the pinnacle of all festivals. There is a certain joyful spirit and friendly culture at Jazz Fest that just make it magical and good for my soul. There is nothing more fun than setting up your little space and enjoying great music and food with all of your new best friends surrounding you for the day. I have met people from all over the country at Jazz Fest and heard interesting stories and a shared loved for the festival that New Orleans is so known for. I have been attending for 20+ years, and my own children love to go as well. We love seeing big name acts, but also regularly see the great locals that play at the fest.

Jazz Fest has been a part of my life forever.

When I was young, my parents would always bring us back a special handcrafted toy or art pieces from a unique art vendor every year. I started attending Jazz Fest as a teenager, and prior to Katrina, I used to volunteer yearly at the Fest. My husband even proposed at Jazz Fest, right in the middle of Congo Square, while The Roots played and dozens of strangers  around us erupted in cheers and congratulations as I said yes. We toasted with moonshine offered to us by our blanket neighbors, and you can see the steeple of Holy Rosary where we were married from the Acura Stage. And a couple of years ago, I was able to cross off a bucket list item: attending all seven glorious days of Jazz Fest. It was exhausting and wonderful, and if finances allowed, I would happily do it every year as I just cannot get enough.

However, this weekend was different.

This past weekend, we were there both Friday and Saturday. At each stage there is a line drawn in the grass, literally, and in front of that line, no blankets or chairs can be set up, as that space is for standing (dancing) room only. Well this year, the lines at each stage have been pushed significantly back. We had this conversation with friends and strangers alike on both days, chatting about how much less space at each stage there is to setup a little spot. On Saturday afternoon, we were catching Better Than Ezra at the Acura stage. We were not camping out, as we were headed to Congo Stage for the very next band.

We had five adults with us, plus our two daughters, when we walked up into the spacious, unfilled dancing space. My children were hot and wanted to sit down, so we tucked the blanket that we had brought with us, into just under their behinds, and they were holding umbrellas over their heads to protect them from the sun. We did not setup any chairs that we had brought with us. A security officer approached us within two minutes to tell us our children could not sit down as it was a “space violation.” I pleaded with him to please let just our children sit down, and he said no. We also watched him make a little boy near us, who appeared to be 3-4, stand up as well. My kids begrudgingly stood, and he walked away. I was dancing in front of my kids and did not see that they had sat back down behind me. The same security officer came back right away, much more aggressively and yelled at me that my kids had to stand up. Mind you, they take up pretty much the same amount of space sitting as they do standing, and there was more than enough space around us.

So we picked up our stuff and moved much further back, as my kids are now visibly upset and my youngest was crying.

We moved to the right side of the stage, back on the hill near the grandstands. There was so much space around us, large patches of grass completely open, and a few people sitting on small blankets tucked under their behinds. So we did the same: tucked the blanket in and the kids plopped down, and we were not near anyone. Our chairs were not out, and all adults were standing. We watched as the same security officer followed and quickly approached us directly again, with another in tow, and these two men got in my face screaming at me, my husband, and my parents. I asked to speak to a supervisor, as they are children and this rule was ridiculous given the sheer amount of space around us. They said they were getting the cops instead, as my children sobbed in fear at the rude and aggressive demeanor of the security officers. I watched them walk over to their supervisors and police officers and then … nothing. These two security officers were on a power trip and both their supervisors and the police saw absolutely nothing wrong with children sitting down on the ground in ample space at a festival. Neither the supervisors or police moved from their positions, and the two officers in question were not seen in our area again. 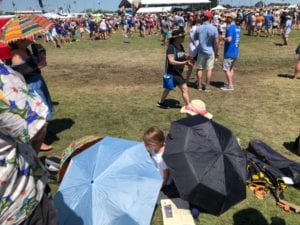 After calming my children down, who were now thoroughly terrified to sit in fear their parents and grandparents are going to be taken by the police, we managed to salvage the day. My family still had an overall wonderful time despite the incident. And I fully understand that when it is wall to wall people in that section, sitting is not an option. But this was not that. There was substantial space all around us and children should not be forced to stand the entire time at a music festival. It was a power trip move and Jazz Fest needs to do a better job of training its officers to read the situation better. These security officers need to understand the spirit of Jazz Fest, that it is a representation of the friendly culture of Louisiana, and we certainly did not warrant having the police called out for children sitting down.

We intend to take our kids back this weekend and hope that this was an isolated incident. 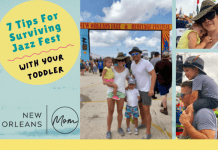 A New Orleans Tradition for Every Family: Seven Tips For Surviving Jazz Fest With Your Toddler 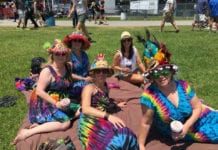 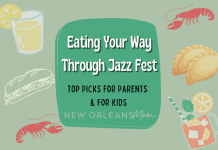 Eating Your Way Through Jazz Fest: My Top Picks for Parents and for Kids

Letting Their Personalities Shine … Even in Mismatched Clothes

Why You Should Consider Belize for Your Next Family Vacation