I have taken my son out to eat at Hooters.

There. I’ve said it, and I’m not apologizing for it.

He was about to turn two, a friend of ours was celebrating his 40th birthday there, and kids were invited. So, I deduced that if other kids would be there, it would be no big deal. And it wasn’t.

Hooters is pretty family friendly. The atmosphere is loud so I don’t have to worry about my kid being disruptive, plus they have boosters, high chairs, and their food is kid friendly. In fact, I’d venture to say that their fried pickles and quesadilla are pretty decent as far as pub food goes.

My kid seemed to enjoy his quesadilla, but what he REALLY enjoyed was interacting with our waitress, and not for the obvious reasons that focus on their uniform, or lack thereof. 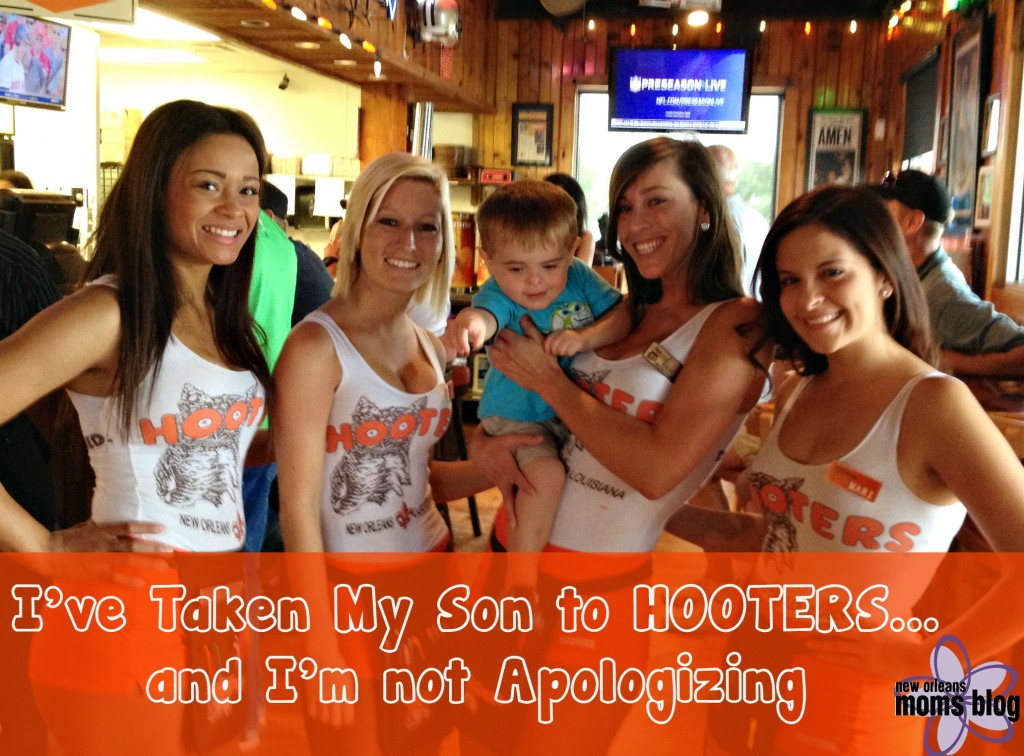 You see, the waitresses at Hooters are really great. At least all of the ones I have ever encountered have been attentive, friendly, and really worked hard to make sure we were taken care of. That day, as I was concerned with my son causing a ruckus while others wanted to enjoy their lunch, our waitress, along with several others, treated him like he was a VIP. She waited on him and brought him his drink and food. She played peek a boo with him, gave him high fives, and talked to him like he was a grown up. He loved every minute and returned her kindness with smiles and laughter. He was a hit among the other ladies there, too. In fact, they were like, “hey, let’s take a picture.” Of course, he wasn’t really thrilled about it, but he did it.

Almost two years later, we haven’t been back, Mostly because I have been trying to eat healthy, and well, the food at Hooters doesn’t lend itself to healthy consumption. But, if my husband wanted to go and bring our son, I’d be okay with it.

I look at taking my son to dine to Hooters as a good teaching and learning experience. Yes, the waitresses there are dressed in less than most; however, they are wearing more than a swimsuit, and my son has seen far more skin among bikini clad ladies on the beach. He also has seen more skin than I’d care to admit on some individuals on our weekly trips to Target or the grocery. It just so happens that the waitresses at Hooters are ALL dressed that way; it’s their uniform (or costume, as my son would think) for their job. By taking him to Hooters (or Twin Peaks – I mean, it is like comparing apples to oranges), I want to teach him how to respect women, no matter how they are clothed or where they choose to work.

Because, most importantly, it is just that, their choice, and while one may not agree with their choice, we should at least offer them respect in their chosen job. Everyone deserves common courtesy, it is good manners! It is no mystery what the point of their jobs as servers are, yet many of these women choose to work there because they know they are compensated well. Many of the waitresses at Hooters use the money they make to put themselves through college, support their family, or have a job that allows them more time at home with their kids. While it may not be a choice that *I* personally would have made, I can’t fault them, and I want my son to extend that same respect to them.

I want my son to understand how to treat girls and women, no matter their age, their appearance, or how they dress. We know that children learn by example. If, as a family, we go to Hooters or Twin Peaks, I will not judge the waitress for her job choice (because, for all I know, it may pay her really well and allow her the opportunity to be home with her kids more), and my husband would treat her with respect and consideration as if she were wearing a typical server’s uniform. He would not ogle or make comments about her appearance in front of our son, and from there, our son would understand that no matter how a woman is dressed, she deserves common courtesy. If the waitress is kind, attentive, and does her job well, then it doesn’t matter what her uniform is. Just because she is dressed provocatively, it DOES NOT give him the right to treat her any different than he would treat ME or any other woman. While I don’t condone dressing provocatively, personally, I NEVER want my son to think it is acceptable to treat a woman like an object or disrespect her, because it is NEVER okay.

I don’t have a daughter, but if I did and I took her there, I would use it to teach her how to respect herself. I would encourage her to not let men treat her like an object and to demand respect no matter what her appearance. I would have a talk with her about how to respect other women, despite how they are dressed and to avoid judgement, as we never know why someone chooses a path they are on. I would teach her how to be confident enough in herself to never want to use her appearance in a negative way. Most importantly, though, I would actually probably quote Don Draper of Mad Men from a recent episode by telling her “You are a beautiful girl, it is up to you to become more than that.”

While restaurants like Hooters and Twin Peaks may not fit the common mold of “family dining” they will not cease to exist. Rather than making those restaurants “taboo” in the eyes of my son, I’d rather use the opportunity to educate him on manners and relations with girls and women because while we would love to shelter our children from everything in the world, we can’t. It is our job to prepare them for the future, and this is just one of those steps I can take.