As a proudly self-proclaimed “weather nerd” I make the assumption that many have heard the well-known phrase often incorrectly attributed to Mark Twain, but in reality, penned by American essayist Charles Dudley Warner, “Everybody complains about the weather, but nobody does anything about it.” Perhaps we could provide an update for 2020 to “Everybody memes about the weather, but those who do know nothing about it.”

2020 has brought about all sorts of added uncertainly, stress, and incredible obstacles…but false information and over-hyped headlines certainly won’t ease what troubles us. Many, like myself, use social media for communicating with those we may be separated from, entertainment, and occasionally educational purposes. There are several meteorological and, even more this time of year, tropical experts I remain in association with on Twitter, Facebook, and all the other seemingly redundant services to get an opinion on a storm or forecast. But ever since the dawn of the internet, we have seen the dawn of the troll. Even some of the experts I follow get a certain thrill about potentially “historic” storms and the impacts they could have.

As a student of meteorology since I was a kid, I can’t always blame them as the excitement of record-shattering weather events can be exciting…however, as a

taxpayer, homeowner, and parent…a new obligation has crossed my path…maturity. I’ll admit, it was exciting to see a storm develop in the Gulf and think “I get to help to big guys with covering a storm threatening New Orleans” when I was an intern in the late 90s. But at that time, I was a senior at Brother Martin, interning under the tutelage one of my “weather heroes” (all weather nerds have one) and had few responsibilities to anyone.

But times have changed.

I now have countless responsibilities, not the least of which is my children, wife, and home. I come to view meteorology not just from the science perspective, but also the standpoint of human impact. I suppose I didn’t see it as much even during Hurricane Katrina, despite the detrimental impacts to my fellow residents. I was young…a year out of college and saw the event as a “once in a lifetime” occurrence. I had no responsibilities other than myself. And perhaps that bodes to a sense of selfishness. No one else to worry about other than your own fascination with meteorology. But fast-forward to 2018. I was married. Owned a home. And had two young children. I was asked to cover the landfall of eventually-classified category 5 Hurricane Michael along the Florida Gulf Coast.

After an interview with a father standing outside of his damaged home and looking into the eyes of his children, near the age of my own, and their obliviousness to the situation of their patriarch attempting to decipher how to carry on with the comforts of home or the grandfather living in a “tent city” with his daughter, son-in-law, and grandson, just excited to have a dog to play with, I broke down. It wasn’t until that moment, nearly two decades after beginning my weather career, that I finally awoke to not only the science of meteorology, but the human impact of what Mother Nature is capable of doing.

It took some time to compose myself before a live segment from the backdrop that was the devastation of Panama City, Florida. Perhaps my awareness of conveying storm forecasts changed that day, but I was never one to over-exaggerate the threat of ominous weather. But I certainly took into consideration human emotions to my forecasts after being exposed to what these storms can do firsthand.

I’ll express concern when warranted, humor when acceptable, and opinion when fitting. I’ve always hoped that my sense of storytelling is enlightening and entertaining for viewers. I have fun at the expense of myself, the seemingly inherent “50/50” nature of my chosen field and crack a joke when the weather isn’t life-threatening.

But touting maps which show a “monster storm” developing and using meteorological nomenclature to emphasize your misguided meteorology is careless in the minimum, and shameful in the maximum with regards to the general public. In my years as a meteorologist and resident of New Orleans, I’ve learned many have accepted a new way of life since 2005…from June 1 to November 30, we remain on high alert for anything with a name entering the Gulf of Mexico.

2020 has proven to be quite the protagonist for the wary populous…two storms at the same time! That fact alone is enough to create fodder for the social-media conscience. So why elevate the threat? Why hype an historic event? For that, I haven’t an answer. As for what I’m talking about, it’s the insinuation that two storms in the Gulf will merge and create a superstorm. And as for the meteorological nomenclature I referenced before, the “Fujiwhara Effect.” Like “polar vortex” and “bomb cyclone” before it, they are all academic weather terms found in every textbook and taught to every meteorology student.

Unfortunately, when the internet and even the media get a hold of it, it becomes an entity unto itself. The Fujiwhara Effect is fascinating without online hysteria…in 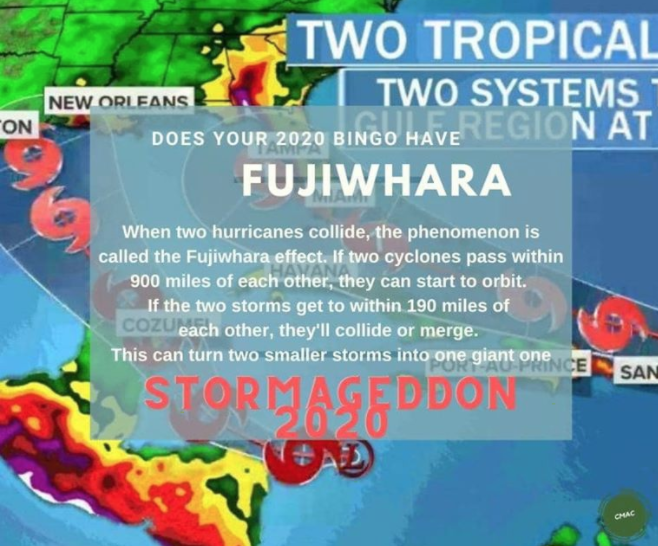 weather, it describes the interaction between two cyclones within a certain proximity to each other. One circulation can draw moisture from the other, one can become dominate and weaken the other, the storms can spin around one another, or one can absorb the other. It’s this latter option that internet trolls grabbed hold of, creating the tabloid headline of “Stormageddon 2020.” This is hype, stupidity, irresponsibility, and dumb!

It is a rare occurrence for two simultaneous named storms to exist in the Gulf of Mexico; historic if they are both hurricanes! What will be interesting is how the storms interact with each other while in the Gulf at the same time, but there is no need to falsify the science that a “super hurricane” will form in the Gulf. People are on edge enough with a threat in the Gulf…I know…I hear from them! Adding to that anxiety unnecessarily is wrong!

Enjoy memes for their entertainment value, but unless it comes from a funny scientist such as myself, don’t believe it!