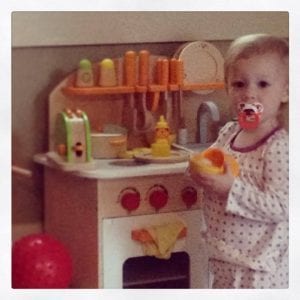 A few weeks ago, we went to the birthday party of our friends’ two year old. If only you could have seen Jane’s face light up when she saw the toys they had in their house and backyard! She spent the day climbing up and going down their slide, playing at the tiny outdoor kitchen and plunking on the keys of their tiny toy piano. I realized then that we simply had to invest in age appropriate toys for Jane.

Here’s the issue (and a confession): I have an aversion to kids’ toys. I know, it’s selfish, but we don’t have a large house, and we have a very small backyard, so they just seem so oversized and brightly colored and loud. However, I felt like we were occupying Jane’s attention with more Sesame Street than I care to admit. I am not a “kids should not watch television” mom, but when the first thing Jane says when she wakes up is “Elmo,” I knew we had a problem on our hands. The only solution was finding a few toys that would give her the opportunity to be creative and imaginative.

So, Mark and I decided to spend a Saturday taking Jane to local toy stores to see what she liked playing with and what could fit in our house. After a few hours of looking around, I found that I was still not ready to embrace the world of kids ‘toys. That is until we went to Zuka Baby on Magazine Street. The lines of toys and baby gear they carry were perfect for our family. They are simple and small, and Jane had a ball playing with them in the store.

We decided on two toddler products that now I cannot imagine living without. The first is the Hape wooden kitchen. It is just the right size for Jane and just the right look for me. Its maple finish ties into our living room, and its colorful accents are attractive to Jane. The kitchen does not come with any accessories, so we purchased the kitchen basics set and the toaster set. Since they arrived, Jane has spent her mornings and evenings making us toast and serving up some very delicious tea. She now wakes up saying “cocoa” and runs straight to her kitchen to start cooking a pot of it. I love seeing her so engaged and using her imagination! 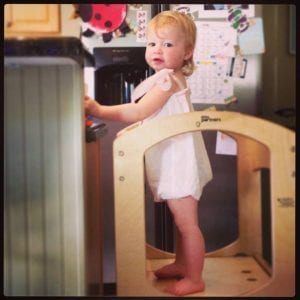 We also purchased a Little Partners Learning Tower. We happened to have just enough space in our kitchen to make the Learning Tower a part of it. Thank goodness for that! This piece of gear is a must have for any toddler. For our nosy rose, it has been a great way to incorporate her in getting set for the day and in preparing her meals. She climbs onto the tower and watches as we make her lunch and get her school bag ready. It gives us a chance to talk about her classmates and her teacher and what she will be doing that week at camp.

She is also engaged in discussion with us as we chop and stir ingredients for dinner. We chat about the fact that bananas and lemons are both yellow but one is tall and smooth and the other is round and bumpy. It has been so fun having her at counter height with me rather than resting uneasily on my hip. It gives her the sense of inclusion she desires but also helps satisfy her need to be independent.

I can honestly say that I could not be more pleased with these purchases. They have added something wonderful to our home without taking it over. Jane has been so fulfilled moving from her kitchen to her learning tower. Our house has been filled with the sounds of make believe. It is filled with the giggles that come from a toddler cooking up a storm in her very own kitchen. And if you’re wondering, there is nothing more delicious than a pretend piece of toast slathered in pretend butter and honey. As Jane would say, “Mommy, yummy!!”

Have you found a toddler toy that you really love?

Do Little Girls Have to Be Mean?: Thoughts on Raising an...