There have been all kinds of decisions I’ve had to face as a parent. Breast or bottle, helicopter or tiger, cloth or disposable … I could go on and on. But there are decisions I’ve been faced with as a mom of three that never would’ve crossed the threshold of my wildest imagination.

The twins have been 97% potty trained for three months now. We can venture out into public in just the big girl britches and the odds are in our favor that we return home dry. Granted, we spend most of the outing making tag team poorly timed runs to the bathroom, but baby steps, amirite?

So this weekend when we helped on a Hogs for the Cause team, I figured we’d be safe hanging out under a giant tent next to a sweet trailer with TVs and a bathroom with running water while the common folk around us navigated a sea of port-a-potties. As usual, I ran back and forth with one twin or another every 20 minutes or so, but we remained accident-free from 10 AM- 3 PM. I walked away to talk to a friend and one of them didn’t quite make it there in time for number two, and my husband did what any rational person would do and threw those princess fairy underpants straight into the garbage far, far away. Into a Pull-Up she went and we moved on. 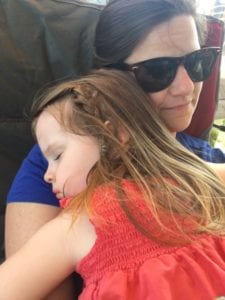 I was enjoying a few minutes of potty-free peace in a giant camp chair, beer in hand, when the still-in-underwear twin hopped in my lap and snuggled up. I should’ve known then, because she isn’t my snuggler, but I was blinded by the sweetness of the moment. She fell asleep amongst the loud music, drunken adults, and a thick-as-fog cloud of meat smoke. Look at how content and happy we both were.

The Swamp of Parental Regret

Thirty minutes into this blissful mother-daughter moment, I was startled by a strange sensation on my leg. You know that thing your brain does when you know something not good is happening, so you use a split second to try and come up with the 437 other things that it [maybe but not really] could be to make yourself feel better about what’s actually happening? Yeah. My husband saw the look on my face and he knew. “Did she just pee on you?” “Uh huh.” She kept on sleeping, that little stinker.

Fun fact: camp chairs hold water. So essentially, in the time it took for her to finish peeing and for me to fully realize the complexity of the situation, my shorts, underwear, [and shirt, unbeknownst to me at the time] soaked up nearly every drop that the chair’s impermeable nylon refused to let go.

I had a decision to make. Well, several. Did I let her keep sleeping? Did I waddle soaking wet the 3/4 a mile through a crowd of 30,000 people to my car, where I had a towel? Did I stay there and hope that my brother could throw me a Hail Mary before he made the drive out there, and beg him to go dig in my underwear drawer to spare me from that walk of shame? I went for the Hail Mary.

I sat there in the swamp of parental regret for a good thirty minutes so she could get a nap in. When she finally woke, guess who was bone dry, save for one spot on her underwear? Yeah, the angelic one.

I waddled myself to the trailer bathroom and stripped down so I could attempt to rinse everything out. Being half naked in a trailer bathroom that smells like smoked meat amongst tens of thousands of people is just as awkward as it sounds, let me tell you. Why did I feel the need to do that, you ask? That way I could at least be amongst people in a 30% water-pee mixture instead of the pure stuff. It felt logical at the time. It was at this point that I realized my shirt was also a victim in all of this, and it was too late to request a new one. I resigned myself to the thought of purchasing a $30 souvenir shirt. Because everyone wants a memento from the time they got peed on in a public place! 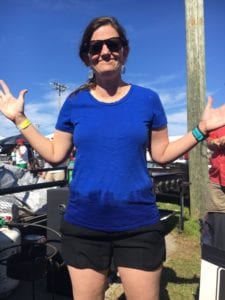 While I waited for my brother, knight-with-shining-dry-underwear, I parked myself in front of an industrial fan and just shook my head in laughter-shame. Luckily, about half our crew are parents, and they understood. Ish. My heroes arrived with dry clothes and clever jokes. My husband found a spare shirt and volunteered to let me borrow the fishing shirt off his back. I went from looking like I peed on myself to looking like I shacked up with my boyfriend at the fraternity house, but that was small potatoes in comparison to being called PollyPissyPants the rest of the day.

Never in my life would I have wondered, “How would I react in a situation where my kid peed on me in public and I had no backup plan?” Maybe I should’ve taken it as a sign of defeat, endured the walk of shame and headed home. Maybe I’ve lowered my standards in life if I’m willing to sit in a puddle of my kid’s pee so she can nap and I can continue to spend the day with people I really like. Maybe I’ve just learned to expect the unexpected and roll with whatever ridiculous punches life and parenthood throw my way.

You know, I never did get that t-shirt.