On August 29, 2007, Jonathan Guy Russo was born to parents Jason and Jen and big brother Jace. He was a happy healthy baby and a typical little boy whose favorite things were Thomas the Train, Oreo cookies, and being home with his family. 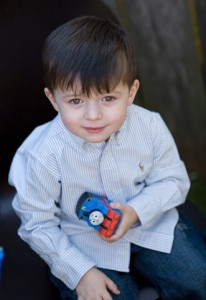 At 18 months old, Jonathan started having headaches. Doctors said that any number of things could be causing them. As he got older, the headaches became worse. On March 3, 2011, Jonathan woke up with a severe headache that no medicine could alleviate. He was brought to the emergency room at Children’s Hospital and after a CT scan, he was diagnosed with a brain tumor called craniopharyngioma. This type of tumor is very rare and there is little research, but what we do know is that it is formed in utero and affects the pituitary gland. Children are typically diagnosed with a craniopharyngioma between the ages of 5 and 10 years old. Jonathan was just 3.

After being diagnosed, his only option was surgery to remove the tumor. This very invasive surgery was scheduled a week and a half later on Monday, March 14th. Complications arose during Jonathan’s surgery, and he never left the intensive care unit. On Wednesday, March 16, 2011, Jonathan left us here on earth and entered into heaven. He became “Our Angel.” Jonathan continues to live through our thoughts and prayers. Through organ donation, Jonathan was able to save four different lives. Although we prayed for a miracle to heal him, in the end we realized that Jonathan was our miracle.

On Sunday, August 25th, we will hold the 3rd annual Jonathan’s Gift: What Matters Most fundraiser at Rock ‘n’ Bowl at 3000 South Carrollton Ave in New Orleans to benefit the Brain Tumor Foundation for Children, Inc.

The mission of the Brain Tumor Foundation for Children is to provide financial assistance, social support, and information for families of children with brain and spinal cord tumors, fund research projects that improve treatment options and search for a cure, and raise public awareness of the disease and advocate on behalf of children who are affected. 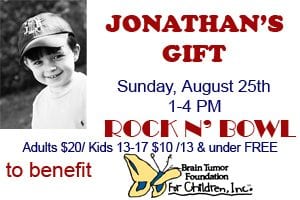 Tickets will be sold at the door the day of the event.
Adults $20
Kids (13-17 years old) $10
Children under 13 FREE
There will also be a raffle and silent auction at the event.
Donations can also be made online at Jonathan’s “Family Matters Most” Fund.

What Gay Dads Are Teaching Everyone on Father’s Day