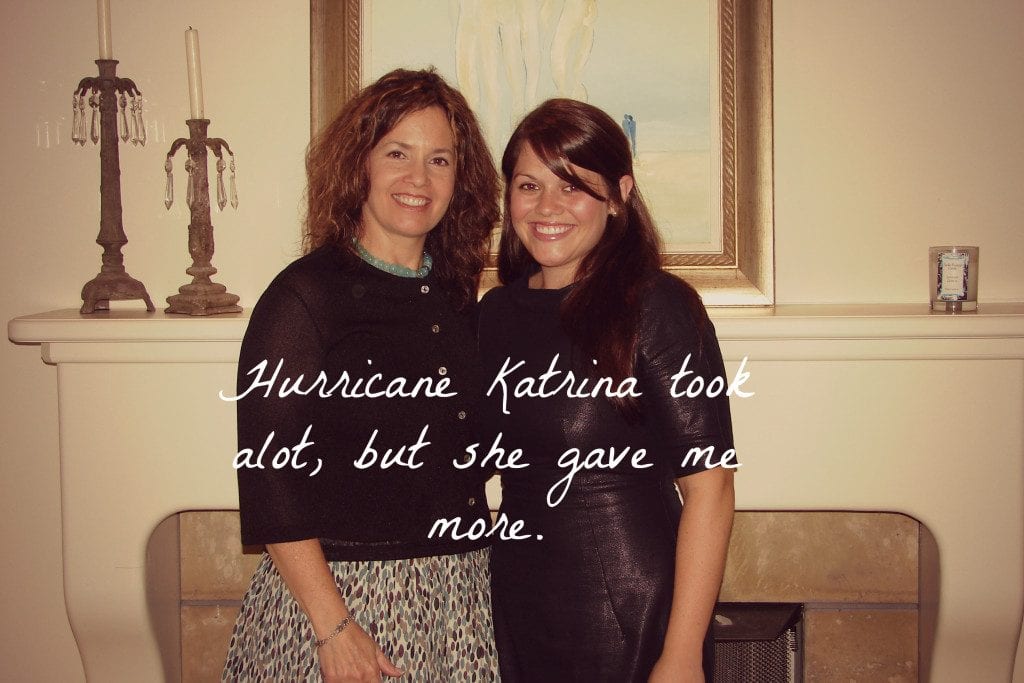 There are details that are so incredibly vivid nine years later, and there are those that have faded with time. But at the end of the day, those details don’t matter, it’s the lessons I learned in the aftermath of Hurricane Katrina.

I was not living in New Orleans when Hurricane Katrina struck.

I was in my last semester of undergrad at LSU. My boyfriend at the time (now husband) had graduated the previous May. We were living together in an apartment on College Drive. A small two bedroom, one bath, with our two husky-labs whose combined weight equaled a grown person. We were comfortable in our space. I received a phone call from my mom on Saturday morning (I think it was Saturday but could just have easily been Sunday; again, the details), August 27th. She sounded scared; not terrified, but shaken. Let me take a few steps back and introduce you to my mom. She is strong, she is a fighter and she is brave. She is everything I hope my children feel about me and particularly, if I am ever blessed with a daughter. So to hear some alarm in her voice rattled me. Her voice shook when she described locking up the house and heading to work. She said “this one feels different.” She was quick to dismiss that thought, but it nagged at me.

My mom worked at a local hospital in Administration.

Although she did not have direct patient care, she was on the Emergency Team A, who was to be relieved by Team B. A plan that would never come to fruition. I kept asking her why she had to go since she didn’t have any patients to take care of. She insisted that this was the right thing to do, and she needed to be at the hospital. I *think* my stepdad may have put up a bigger fight for her to leave, but as I said before, my mom is strong and she was going to do what she felt was right. She asked if my stepdad and little brother could crash at my apartment for the storm. “Of course,” I replied. My stepdad and brother made it up without too much fuss, and we all settled down to ride out the storm. We lost power at some point Sunday night and Monday morning but still we maintained contact with my mom. She still had power at the hospital and cell service was not interrupted.

On Monday, we thought all was well.

Of course we knew there was damage, but we believed we dodged a bullet. My mom even told us that the streets were dry around the hospital. Well, you all know what came next. The levees breached and our city filled as any bowl would. My in-laws who lived in Baton Rouge at the time regained power quickly, and so we were able to use their generator for our fridge, to run some fans and most importantly, to watch the news. We were glued to the television. Cell service started getting spotty, and my mom was giving us some scary information about rumors that were going around the hospital as it relates to looting and rescue efforts. I think my stepdad was able to talk to my mom via cell phone a couple times on Tuesday, and the reports were that she was ok but that looting was a concern and there was no national guard/police protecting the hospital. Essentially, they were on their own in a war zone. I can recall receiving an email from my mom on Wednesday that gives me chills to think about. It was only a few lines, it read: “water is rising, send HELP.” I cannot describe how sick I felt when I read this email. My strong mom seemed broken and scared. That terrified me. We tried, as everyone else did, calling ambulance companies, the parent company of the hospital etc., but no one could get in and it was so disorganized, no one knew who was in control. We waited by our phones for something, checked emails religiously but there was no contact. All we had was the news which initially reported on the looting but then abruptly discontinued any mention of crime. That was alarming. We had power in our apartment at that time so many of our friends who did not crashed on our floor.

In the early morning hours of Thursday

My mom was able to call my husband on his cell phone. He was on his way to work and told her to call our apartment. I was still asleep so she got the answering machine. To this day, it makes me ill to think I did not answer that call. Her message was pleading, and she was crying “Please….is anyone there?….Please…..is someone there?” It was horrific to hear my mother like this. I ran from my room but I was too late. I missed her call. I immediately called  my sister and played the message to her. Together, we wept. There was no contact with my mom on Thursday. My step dad was ready to arm himself and head into the city to get my mom. We were honestly so scared that if we did not get her ourselves, we were never going to get her back. At points during that week, I truly questioned whether I would see my mom again. I don’t think I slept much Thursday night. On Friday, I was driving around with my little brother, doing anything to avoid sitting around and thinking or watching the news. I was driving when I got the call from my step dad. “Mom was traveling in the back of a pickup truck on I-10 and would be arriving in the Hooters parking lot this afternoon.” I started crying and told my little brother the news. My step dad picked her up, and she was waiting for us at my apartment. I ran to her and cannot remember a time in my life that I was more excited to hug my momma.

Katrina took a lot, but she gave me more.

My mom and I did not have the relationship we have today at this point in my life. Sure, I admired her and loved her deeply but we fought a lot. It was better than when I was in high school, but it was not what it is today. Katrina changed that for me. It changed my perspective. When you think you are going to lose someone, and you get a second chance, well you don’t take that for granted. I think Katrina softened my mom a bit too. We also grew closer because we all lived together in our two bedroom apartment for about 6 weeks before my parents permanently relocated to Baton Rouge. My mom is my hero for many reasons, her Katrina story is just one of them.

Enough With The Parties … FOR THE LOVE!