It’s that time of year again, especially for those of us who “play Santa” in our homes. Our kids are writing and re-writing their wish lists, anxiously awaiting the blasted Elf (yes, we have one and no, I don’t like it) and mom is treating herself to Starbucks peppermint drinks for no reason other than because she can. Preparing for the holidays also means that kids are scouring all of the catalogs that magically land en masse in the mailbox throughout November, circling absolutely all of the toys, including those that they’ve never expressed interest in before. Then, we wait. We wait until they are at school or we have a lunch break at work or they are “sleeping” in order to search the internet for deals, sales and the special things that will make them squeal with joy on December 25.

I’m going to go out on a wild limb here and say that most moms rely on Amazon for at least a piece of their Christmas shopping. If you’re a Prime member and receive free shipping, it’s an absolute no brainer. Items tend to arrive quickly and in good condition, and when problems arise, Amazon is right on top of that, Rose. And this year the holy grail of all catalogs arrived at many homes in late October, so most kids have been flipping through the Amazon toy wish list for weeks.

A few nights ago, I figured I’d hop online to knock out a few of the items that my kids had spotted, including the elusive Winter Disco LOL dolls. Target was having a sale, and I wanted to snag a few of the things from Amazon ahead of the Thanksgiving break. My children are 8, 6 and 5 so bear in mind that I purposely went online and ordered while school was still in session so that I COULD HIDE THE BOXES WHILE THEY WERE AT SCHOOL. Keep that in mind, folks.

My 8 year old son is challenging to shop for in particular. He’s really past playing with traditional toys, and his primary hobbies are watching ESPN or playing sports. The few things he “wants” are either not things that can wait (his shoes are literally falling apart) or not things it would ever make sense for “Santa” to bring (how would he know what size baseball glove and if it fit). Now, I realize that 80% of this story revolves around my own desire to keep the Christmas magic alive for just one more season, but hear me out.

He had circled the 18 inch plush Forky in the Amazon catalog.

I thought, “oh my heart, just a little bit of baby left in him!” And like any sentimental mom would do, I ordered that thing. I was going to have it sticking out of the top of his stocking, 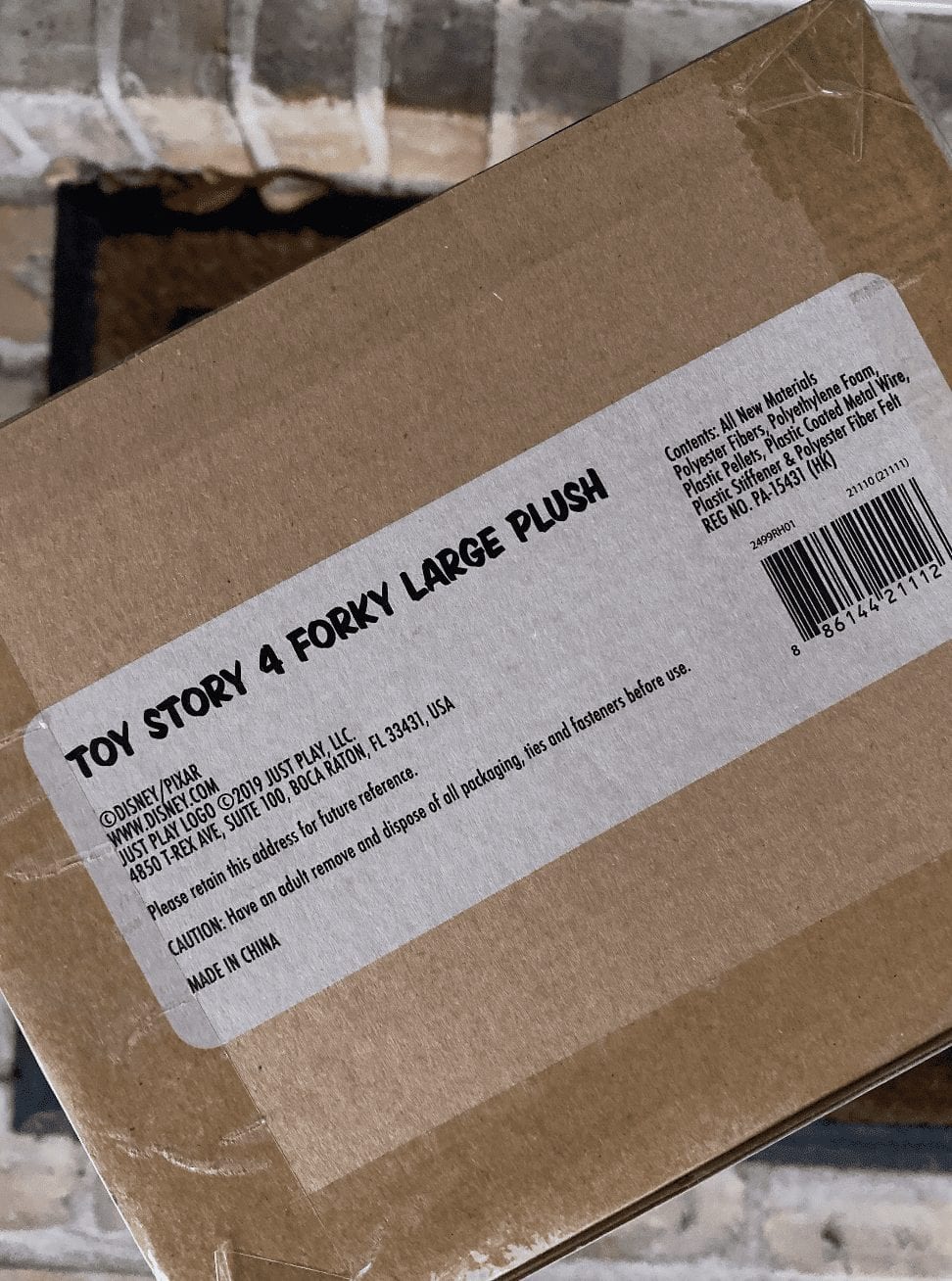 and I thought it would be fun, festive and totally appropriate for Santa to have brought. And then he found the package on our doorstep. In a Toy Story branded box. Super slick, guys.

And it made me scream internally, “Dear Amazon, YOU ARE RUINING CHRISTMAS!”

Okay, that may be a tad dramatic, but for a company that has logistics down to NASA level detail and can get packages to us in 48 hours, you’d think that someone at the company would think, “hmmmm, maybe we should be hiding toys in boxes at this time of year?” Why else is one ordering a stuffed Forky if not to gift it to a child? And many kids can … read? He was so proud to read that label out loud.

Let me acknowledge that this incident will not ruin my season for real, and there are far bigger problems in the world. Our own family adopts several others throughout the season who are less fortunate, and I fully recognize the privilege that it is to have (a) internet on which to order Forky (b) the funds to spend on Forky and (c) the time to even share this silly story. But man, I was already struggling with what fun silly things “Santa” could surprise him with and, well, now that one’s off the table.

Thankfully his sister has a birthday next week and I asked him to please quickly hide it, that it was a gift for her. A few hours later he said to me, “man, she’s so lucky, even I’d like that Forky!” And it broke my heart a second time. I think the moral of the story here is that we are all trying to cling to childhood just a little bit longer. The first Christmases pass in the blink of an eye, and I am just a mom trying to preserve the joy for a child who is growing faster than I thought possible. Logical or otherwise, I was excited about that darn Forky plush and the irony here is that I don’t think his sister even wants it. She’s getting it now, but this all could have been avoided with plain boxes, darnit!

Now, does anyone have any inexpensive Christmas gift ideas for 8-9 year old boys?

10 hours of labor for 2 beautiful babies