Life is too short to keep eating the same traditional, go-to king cake favorite every Carnival season. The 2023 Carnival season is especially short– only 47 days (from Jan. 6 to Feb. 21). This means that you have less than 50 days, or roughly 7 weeks to get out there and try some of this season’s bold, non-traditional king cake trendsetters. From king cake charcuterie to king cake egg rolls to king cake with Vietnamese coffee icing, Boudin, and sushi, local bakeries and restaurants are making sure New Orleanians’ palates have plenty of new flavors to explore. Be sure to bring your appetite, be courageous, open-minded, and embrace creativity. But whatever you do, don’t you dare ask the question, “But is it King Cake?” Because of course, it is!

The following list includes bakeries from all over the Greater New Orleans Region, and is organized alphabetically. Many of these shops offer pre-orders, shipping, and/or hold pop-up events — so you don’t necessarily have to live nearby to enjoy one of these featured treats. This list is by no means exhaustive. What’s included here are cakes that are both trend-setting and lesser-known than those produced by the larger bakeries. Some of the varieties featured here are new to this season, and some are popular returning rule-breakers.

Ayu Bakehouse (801 Frenchman St.), a bakery that opened in the Marigny neighborhood in June 2022, boasts 3 gorgeous eclectic king cakes this season: the Chocolate Babka, King Muffaletta, and Croissant City Classic. With the King Muffaletta, the bakery puts a carnival-spin on their popular muffuletta breadstick, expanding it into a braided, ring sized savory king cake. The Chocolate Babka is a flaky, rich-chocolatey update on the traditional sweet braided bread originating from Jewish communities in Poland and Ukraine. According to Ayu Bakehouse’s Instagram, the Croissant City Classic is where “old school meets new with our cinnamon cream cheese laminated dreamboat made with local raw cane sugar.”

All of Ayu’s king cakes are served with handmade gum paste golden beans instead of plastic babies. King cakes are available for pre-order at their storefront location.

Buttery Spell often sells their butters and treats at area farmers’ markets in Slidell, Metairie, and elsewhere in Southeast Louisiana.

Bywater’s Crawfish King Cake is stuffed with crawfish, made with house white bread dough, and covered in garlic butter, and topped with “Mardi Gras parmesan cheese.” The Boudin King Cake is made the same way, but stuffed with Boudin (traditionally a blend of pork, rice, onions, peppers, and seasonings stuffed into sausage casing). The Spinach and Artichoke King cake is made with house-made garlic bread, filled with spinach and artichoke dressing, and topped with parmesan cheese.

The Bouille King Cake and Frangipane King Cake are both made of house-based brioche. The Bouille is filled with Cajun custard, while the Frangipane is filled with frangipane cream and topped with traditional purple, green, and gold sugar. The Bourbon Cinnamon Vegan King Cake is also topped with these classic sugars, but according to the website, is made with “soft, sweet potato dough rolled with a cinnamon swirl, baked golden brown, brushed with bourbon glaze.”

There are honestly enough king cakes here to fill your entire Carnival eating calendar! To find out when you’re favorite Bywater Bakery king cake is available, be sure to visit the online bakery menu.

Debbie Does Doberge’s Cafe Brulot King Cake is where two New Orleans originals meet: it’s a doberge cake with cafe brulot ingredients. Doberge, a cake with multiple thin layers of cake alternating with dessert pudding, was originally created by local baker Beulah Ledner in the 1930s. Ledner adapted her cake from a Hungarian/Austrian Dobos torte. Cafe Brulot Diabolique (“Devilishly Burned Coffee”) was invented at Antoine’s Restaurant in the late 1880s by Jules Alciatore, the son of the restaurant’s founder. Cafe Brulot typically includes cinnamon, cloves, lemon peel, sugar, and brandy, which are mixed together, heated, and lit on fire before hot coffee is poured on top.

Have you ever dreamed about a slice of king cake that brings the tastes of Vietnam and New Orleans together in one bite? Dough Nguyener’s Vietnamese Bakery of Old Gretna serves a Cafe Sua Da king cake– a traditional king cake with Vietnamese coffee icing and filling woven in. Dough Nguyener’s (pronounced “Dough-Winners”) also serves light, fluffy traditional king cake and cream-cheese filled. While their storefront is still under construction at 433 Lafayette St., you can score all of their king cake varieties at any local Huey P’s Pizzeria locations and at Thanh Thanh Restaurant  (next to the Old Gretna Huey P’s).

La Petite Sophie Patisserie, the Modern European Bakery also mentioned in the 2022 post, is offering a new king cake this season, in addition to its celebrated favorites. As with other area bakeries, this year they are offering an individual sized king cake. The Pecan and Satsuma Brioche Individual King Cake is only available at the Patisserie’s stands at German Coast (Destrehan) and Gretna Farmer’s Markets. At the River Ridge storefront location (9047 Jefferson Highway) the popular Kouign Amann king cake is available weekly, while the Nola Style, Galette des Rois, and Brioche Galette are offered on different weeks throughout the season. For more information on these new and weekly cakes, visit La Petite’s Instagram page.

Rock-n-Sake is a well-known Japanese restaurant with several locations in Southeast Louisiana. Their Sushi King Cake (while not new this year) has also become quite the popular trendsetter. Set to “roll” on January 17th, Rock-n-Sake’s King Cake Sushi consists of pressed sushi rice “dough,” which is stuffed with snow crab and cream cheese. Assorted, colorful raw fish (tuna, spicy tuna, fresh salmon, yellowtail), various toppings (lemon zest, yuzu tobiko, wasabi tobiko, rainbow sprouts, crunchy tempura flakes, jalapeños, smelt roe, sriracha, lime) and sauces (eel sauce, spicy mayo, chili sesame oil, ponzu, voodoo sauce) are layered on top of the sushi rice. This sushi extravaganza is shaped in the signature king-cake ring and costs much more than most king cakes, at $100 per cake (plus tax and credit card processing fee). Unlike most king cakes, this one is a meal, which can feed 6-8 people. To order, visit www.rocknsake.com or www.sushikingcake.net.

Rollin’ Mamas is “home to the original king cake eggroll,” according to their Instagram page. Based in Hammond, this business caters birthday parties, weddings, work functions, and school fundraisers. Their Facebook page includes a list of their scheduled pop-ups for the 2023 Mardi Gras season (they will be at the King Cake Crawl & Contest at Lafreniere Park in Metairie on Jan. 28th).

Their signature egg rolls are sold in sets of 25, 50, 75, 100 and up, starting at $100 for 25 (2 flavors). Flavors include cinnamon, Bavarian cream, white chocolate peppermint, cream cheese, and various other fruits. The Mamas also offer a King Cake Charcuterie (full of king cake eggrolls and assorted toppings). To place an order, call the Mama Krewe at 225-588-8777.

Sala Nola, a restaurant in the West End neighborhood of New Orleans (124 Lake Marina Avenue), is known for its cocktails and wine paired with small plates and entrees. For Mardi Gras season, they are offering a unique carnival pairing– a king cake martini (made with house-infused cinnamon vodka) with festive zeppole. (Zeppole, an Italian pastry, are deep-fried dough balls with cinnamon cream cheese icing about 4 inches in size– think beignet balls.) Sala’s Mardi Gras Zeppole are topped with powdered sugar and sprinkles in the signature carnival colors of purple, green, and gold. They are sold by the dozen, can be ordered with or without the martini. King cake zeppole are available now through Ash Wednesday for dine-in or take out, at brunch or dinner, while regular zeppole are available year-round.

Stuph’D Beignets and Burgers, located at 3325 St. Claude Ave., is known for it’s sweet and savory stuffed beignets. Beignets “stuph’d” with Philly Cheese Steak, grilled shrimp, Creole crawfish, hot sausage, Oreo cheesecake, sweet potato pie, brownie and walnuts are popular favorites year-round. During carnival, they offer a king cake stuph’d beignet– which is as decadent as it sounds. “The icing melts into the cake and it gets sticky and gooey,” one customer explained. ” It contrasts with the crisp and airy outer dough. Very decadent.” Stuph’d beignets are available for dine-in, delivery, or carry-out. To place an order, call (504) 459-4571.

This year, The Station is selling king cake “bites” instead of slices. These “bites” (individual, donut-sized portions) are available at the bakery, while full cakes are sold by pre-order only, with two days’ advance notice. To order, please call (504) 309-4548 or email [email protected]

Charcuterie boards are known for featuring a variety of cheeses and meats. So what in the world is a King Cake Charcuterie? 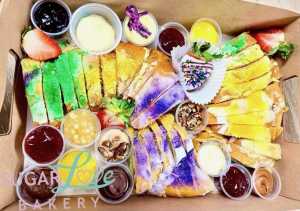 Sugar Love’s King Cake Charcuterie Board features king cake slices with individually
packaged dips that normally see as king cake fillings– fruit jellies, chocolate, and even peanut butter. Strawberries are mixed in. Sugar Love also offers king cake on a stick (sold by the dozen, with a little baby perched on each), king cake hot chocolate bombs, and other enticing varieties such as praline pecan king cake with caramel glaze and Chantilly king cake. This bakery offers king cakes for pickup and also ships the king cake charcuterie box, king cakes on a stick, traditional, and one-filling cakes. They even run a king cake fundraising school program, where participating schools can sell king cakes, raise money, and also win prizes. Local baker Sierra Dee is the proprietor of Sugar Love, which started in her kitchen at home and has now grown to a storefront location on 1329 Englewood Drive, in Slidell.

Tavi, a new Israeli restaurant that opened in Covington on Jan. 5th, is the “sister” restaurant to Shaya, New Orleans’ award-winning bistro that also showcases modern Israeli and Middle Eastern fare. During Carnival season, both establishments offer Cinnamon Babka King Cake with salted caramel and streusel for in-restaurant pickup (at either location). To pre-order at Shaya, please visit their website. These popular cakes frequently sell out, so be sure to get yours before it’s too late!

Make Your Own King Cake

Also note, we have advice on how to make your own king cake at home, too!

Need a king cake shipped to your door? We have that too! 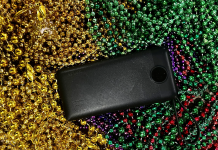 Visit N7 for Your Next Date Night