Disclosure :: this post is sponsored by shopDisney, but the irony is that I had personally just finished purchasing my daughter’s Halloween costume from Disney when shopDisney landed in our inbox. This sale is a great chance to snag Halloween costumes for the entire family from the comfort of your couch!

Never Too Old For Disney :: The Joy and Magic of shopDisney Halloween Costumes

Like most children, mine are pretty fanatical about all things Disney. I have vivid memories of my son, now ten, watching Cars on repeat when he was a toddler. He’d 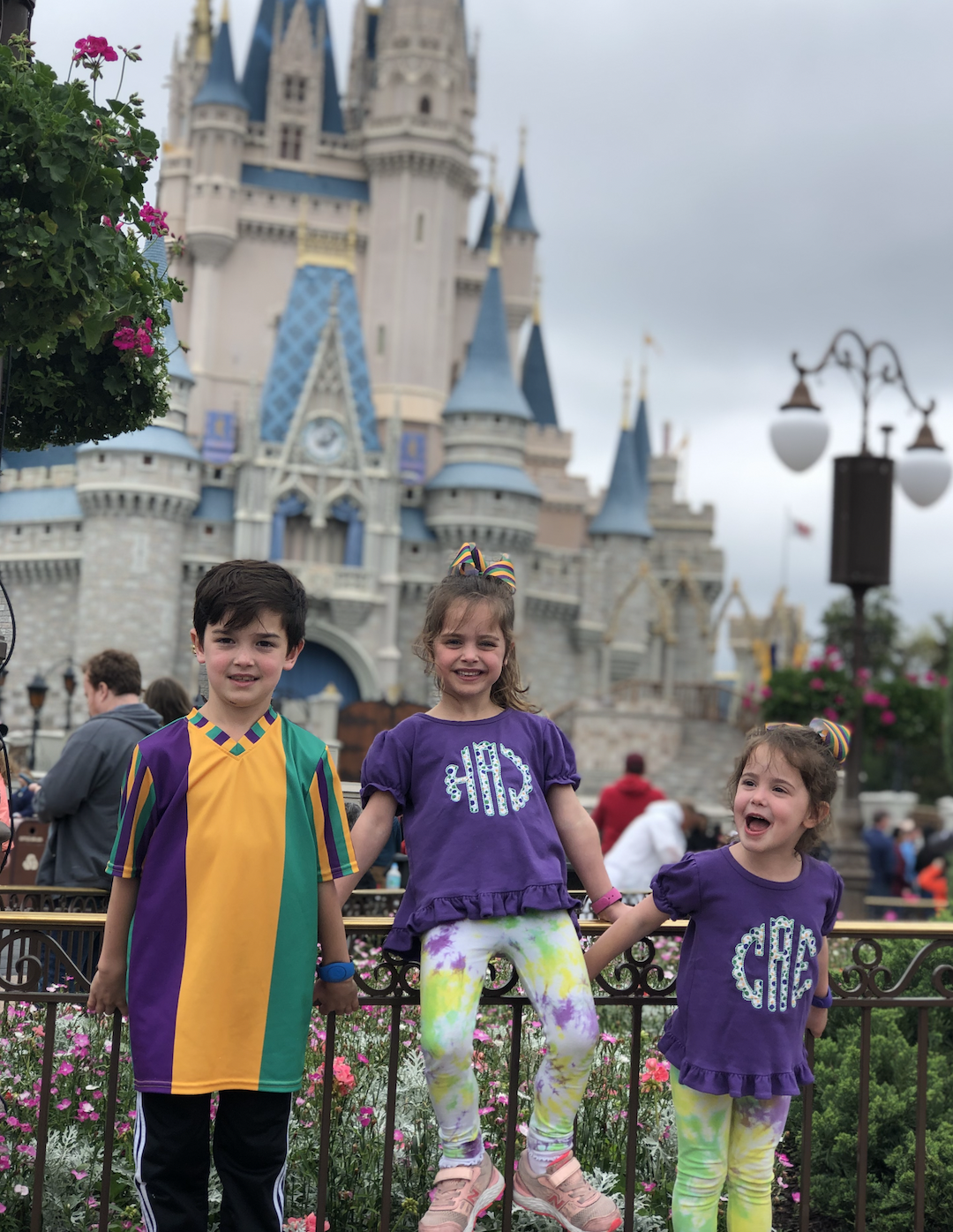 stand in his footed Lightning McQueen pajamas, looking up at the TV, all while lining up his Holly Shiftwell and Tow Mater cars strategically to “race” in our living room. We took our children to Disney World – somewhat on a whim, I might add – when our youngest was less than a year old. At one point or another, every Disney princess costume has hung on a hanger in our playroom closet, and one of the highlights of my professional career was sailing on the Disney Wonder on a media pass in 2019. While our Disney World adventures now include more Everest rides and less Dumbo, all of our kids still beg to visit Disney World and find magical moments in the movies. I never EVER thought I’d say it, but we are a Disney family. Even my husband likes it.

As Halloween approached this year, I was getting a little sentimental thinking about how the kids may not even want to dress up. I am pretty sure my oldest will be “too cool” to trick-or-treat with us this year and will likely choose running the neigborhood with friends. I think we have a few years left with my daughters, now seven and eight, but they are quickly outgrowing the princesses and speeding straight towards sports bras and make-up. (If you think they sound young for that, I am going to say what the old women at the grocery store would say … just you wait! It happens faster than you think.)

When my eight-year-old daughter excitedly told me that she knew what she wanted to be for Halloween, I was bracing myself. I just knew she had something with her friends 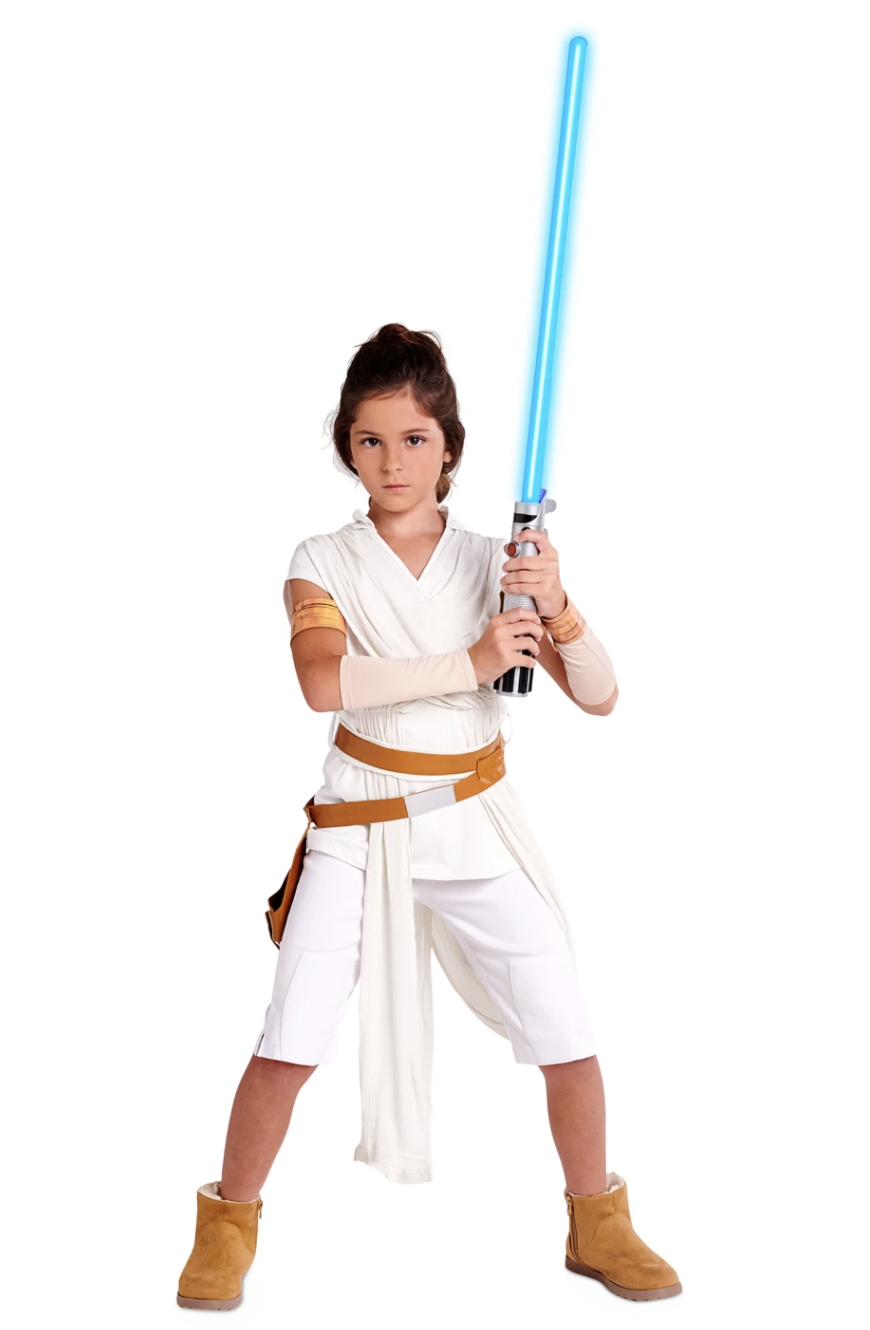 planned, so I was pleasantly surprised when she insisted on Rey from Star Wars. While I myself don’t love Star Wars (a sin, I know), I thought, “Star Wars is Disney … we can work with this!” I will admit that we first scoured Amazon for costumes, but they were all truly coming up short. They looked like knock offs, or when we zoomed in they appeared inauthentic and cheap. After spending more time than I’d like to admit with her snubbing her nose at the Amazon options, it hit me … check the shopDisney site! Mom brain at its finest, I know.

We were absolutely thrilled to see that not only was there an authentic Rey costume available, but it was … ON SALE! Instead of paying $49.99, I paid $34.99 which is way more palatable in my book. She is truly obsessed with Star Wars, which win win for the whole family means … we have to go back to Disney World again! See, that’s the thing with Disney; just when you think your littles are too big, there is a new obsession or movie or character waiting around the corner. I thought we were done with Disney costumes, but we’re not. And that makes my Disney heart happy.

While we were browsing, of course the seven year old overheard what we were doing and excitedly wanted to join in. Once we had Rey in the cart, we perused all of the other choices, which was kind of like a trip down memory lane. We had an entertaining discussion about how much we’d all love a baby in the family because then would you LOOK AT THIS INSANE CUTENESS?! Someone needs this for their baby, am I right? During that discussion, my husband opened a beer and we kept shopping. 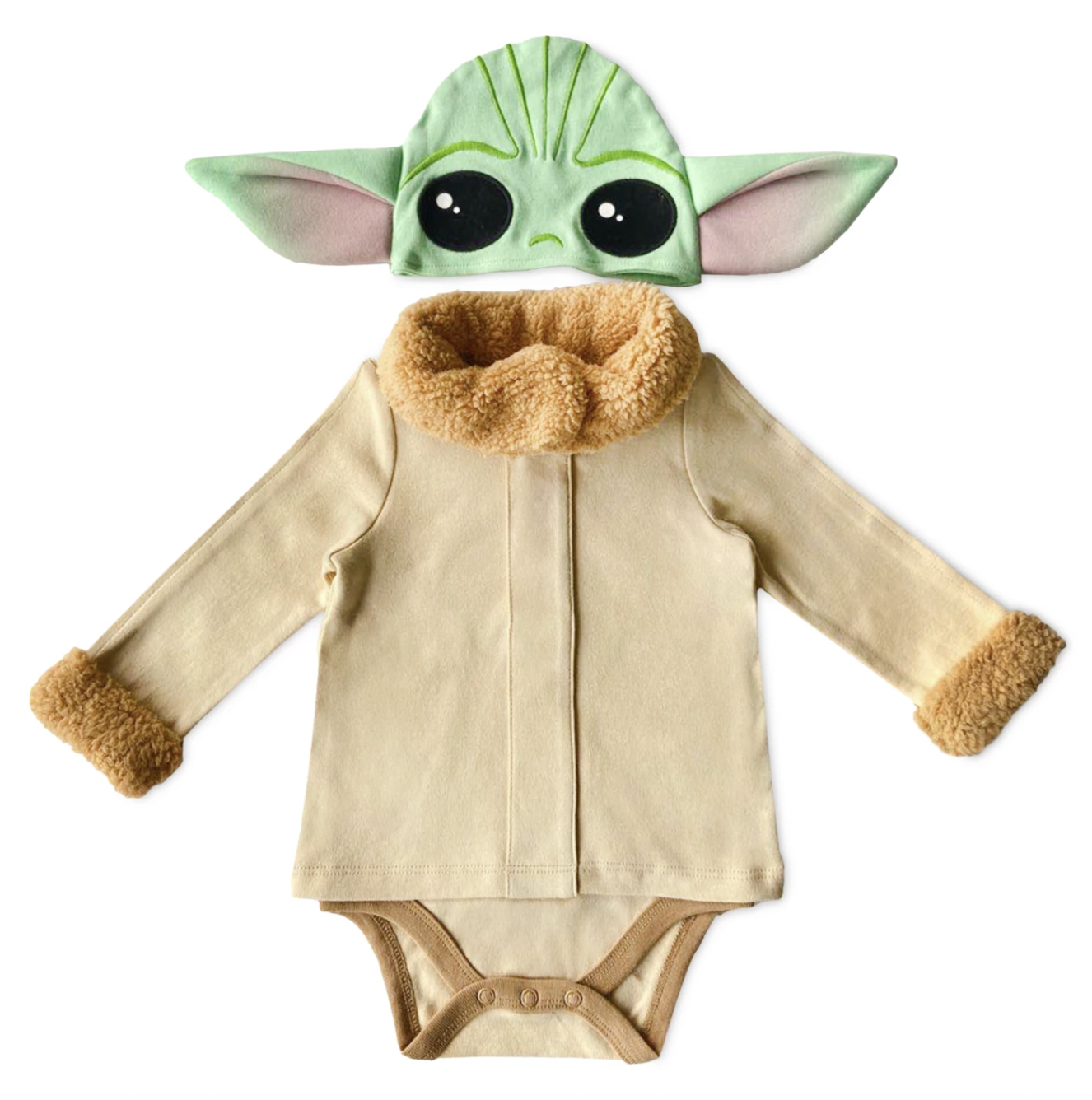 We all got a kick out of the fact that even the dog can dress up in Star Wars attire, too! Dog moms, take note – your family pets can wear shopDisney Halloween costumes with the whole family, and we think that’s the kind of happy the world needs right now. My daughter also tried to convince my husband that we could all dress as The Incredibles, but then she spotted something from Cruella and the rest was history. She’s now dressing up as a Dalmatian. But I think it’s pretty neat that your family can head to shopDisney, grab a theme together and be done with Halloween. I am not crafty at all, so try as I might, I am never designing a costume from scratch!

As always, Disney thinks of everything and is leading the way with regards to inclusivity. 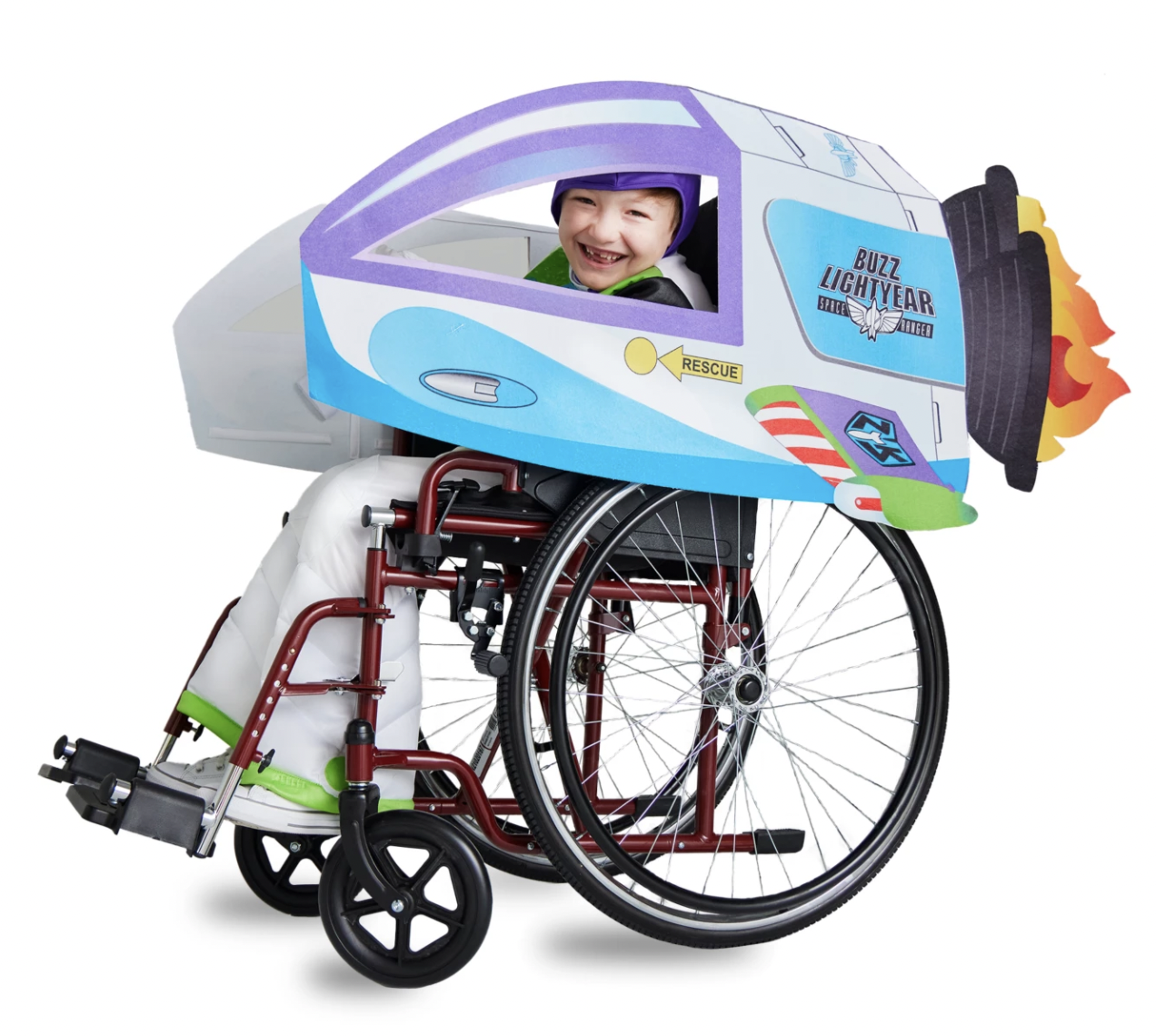 There is an entire section on the shopDisney website dedicated to adaptive costumes, including choices for your special princess (whereby the wheelchair becomes a carriage) or villain. Every child wants – and deserves – the chance to celebrate Halloween with the rest of their neighborhood, and the adaptive costumes are a really nice aspect to shopDisney’s Halloween collection. I also love that these costumes fit seamlessly in with the rest of Disney’s offerings, so aesthetically the family or siblings still look perfectly cohesive and “on brand.”

Plus, shopDisney Costumes Are On Sale!

Last but not least, as I mentioned above, the shopDisney Halloween costumes are ON SALE for 30% off through October 15. My daughter’s costume shipped the day after I ordered it, so it should be here any day (another win, not fighting the lines at big box stores). Maybe you already have your Halloween costume, in which case shopDisney costumes make fabulous Christmas presents – play Santa now and thank yourself later! 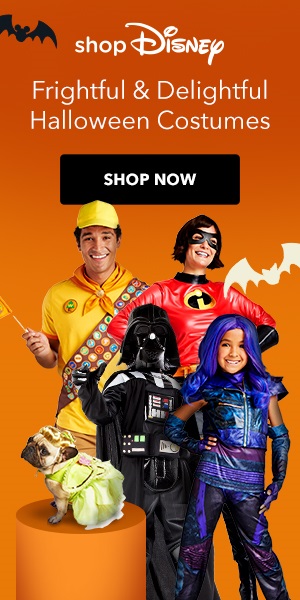 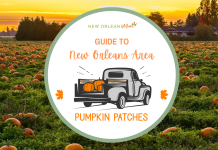 It really does take a village: practical ways to help a...

NOLA Panty Project :: How You Can Help