“There’s a spooky ghost in there!”

Those are the words that came out of my barely three-year-old’s mouth months ago. As much as I would love to say “I didn’t think much of it,” it really freaked me out. A spooky ghost? Where was this coming from? It was the middle of winter; we had already packed up the Christmas tree and Halloween décor was long gone. I decided to chalk it up to “kids say the darndest things” and leave it alone.

Nevertheless, I couldn’t leave it alone because my son kept bringing it up. 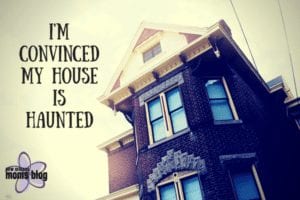 He would point to his bathroom and say, “there’s a spooky ghost in there.” Sometimes he’d stop in the hallway, put his hand next to his ear and say “you hear that? It’s the spooky ghost! He’s coming!” My husband thought it was amusing, even more so because I reacted so strongly each time our son mentioned the ghost. “Stop saying that! There’s no such thing as ghosts!” would be my reaction each time he felt the need to make the ghost’s presence known.

During our bedtime ritual one evening, he climbed out of his bed, walked to his door and shut it. Before climbing into bed he nonchalantly explained: “I need to shut the door so the spooky ghost doesn’t get me.” When I, once again, told him, “there’s no such thing as ghosts!” he replied matter-of-factually, “yes there is. He’s going to come in his spooky ghost car and take me to jail!” Since then, I’ve added a “there’s no such thing as ghosts” as a part of our nightly bedtime ritual, yet my son still insists that his door stays closed.

I wanted to label the “spooky ghost” as a phase and move on, but there’s more to this story. My son’s claim of the spooky ghost really freaked me out, but that’s not the reason why I believe my house has a ghost. Over the past few months, there have been several incidents that only the supernatural can explain.

Humble brag alert: Each week I fill my son’s tub with bleach water and sanitize his bath toys. One week I filled the bathtub with bleach water, dumped all his bath toys into the tub, and proceeded with the rest of my cleaning routine. I checked the tub to make sure the toys were all submerged in the water, then continued cleaning. Once I finished, I proceeded to the bathroom to drain and rinse the toys. The tub was completely empty–with the plug still in. Leaky plug you say? It has not happened again.

This would have been believable except my husband was on the other side of the house. The only other person who could have turned off the light was my son. Except he can not reach the light switch without his stool, and his stool was not in the bathroom, and there was no water on the floor. My husband suggested maybe I did not turn the light all the way on so it switched off on its own. We both tried to recreate a “half-way switch” of the light but could not.

You can probably chalk up the bathroom incidents to faulty drains and switches. This last incident has me convinced my son is right when he says “there’s a spooky ghost!” One rainy afternoon this past summer, my son and I sat at the kitchen table working on an art project together. All of a sudden, scissors flew off the counter and landed in the middle of the kitchen floor. As soon as they landed, my son turns to me and says “the spooky ghost do that.”

I thought maybe the scissors were on the edge of the counter and fell off. However, they would not have landed in the middle of the kitchen floor–it was too far of a distance to make sense. In fact, months later, as I sit typing this, I have goosebumps just thinking about it.

I’m not one to believe in ghosts, but these things have officially freaked me out.

Even more recently, my son got a hold of his ski goggles and wore them around the house. He called them his “ghost glasses” because he can see the spooky ghost when he wears them. I decided to go ahead and ask him what the ghost looks like–all the while thinking Please don’t say the ghost looks like an old man. Want to know what my three-year-old said? “The ghost looks like a big apple!” Guess I won’t need to move out the house as soon as I thought… 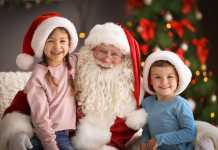 See You at the Dojo {Why You Should Sign Your Kid...