As we all know, every pregnancy is different. Since I got pregnant with my first child pretty young, I was naïve and ignorant in so many ways. (Does anyone else just shake their head at their younger self?) Now that I am getting older and more experienced in pregnancy, I am realizing how different each one truly is.

My first baby was completely uneventful – perfect pregnancy, labor and delivery, and then baby. I was also fortunate to have a mostly uneventful second pregnancy. We found out the baby had a ‘kidney malformation,’ but it was a wait-and-see scenario. I saw the Maternal Fetal Medicine (MFM) specialist a couple of times to see what was going on, but I was eventually released to my regular OB/GYN as there was nothing that needed to be done. My second baby also had a single umbilical artery that was missed until around thirty six weeks, and my labor for this one was pretty good also.

I didn’t really have any major complaints or complications for my third pregnancy either. Towards the end, I had a lot of Braxton hicks contractions, but she stayed put until thirty nine weeks and three days. Immediately, there were ‘genetic concerns.’ After the doctors told us she was likely going to die (despite being perfectly healthy and breathing on her own), she was diagnosed with the most common form of dwarfism – achondroplasia. Achondroplasia doesn’t run in our family and our doctors have mixed opinions on it recurring with our fourth baby, so as soon as I got pregnant, my OB decided he would prefer me to see an MFM specialist early on. I didn’t know what to expect seeing the specialist so early in my pregnancy. 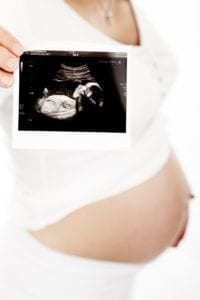 I reached out to the Facebook world and was shocked to see how many friends and acquaintances have seen or currently see an MFM specialist!

Some people had only been once or twice, some had bi-weekly or monthly visits, but overall there were a lot more people than I expected who had seen one at some point in one (or more) of their pregnancies. This was reassuring because I didn’t feel like it was such a scary experience since others had been there also. It also showed me that this isn’t something that we talk about nearly enough. I’m not sure why that is, but I wanted to share my experience in case you’re going through this and wondering the same.

I saw the MFM specialist for the first time at sixteen weeks.

Overall, it was a pretty quick, easy and painless appointment, and we left with peace of mind. They first asked us a lot of questions: previous births, complications, weights, all those general details. Then they asked about the health of each child and family history. While they were doing all of this, the ultrasound tech was performing an ultrasound and checking everything out. Since I was only sixteen weeks, there wasn’t much else that they could or needed to do, so they just checked out the very basics. Once the ultrasound was complete, the doctor came in and chatted with us. He filled us in on everything he did or didn’t see on the scan. He also took a look with his eyes to see everything on the baby, placenta, fluid and all that jazz. I was scheduled for my anatomy scan with him in four weeks, and that was it! Easy peasy lemon squeezy.

I’m not sure if I will remain ‘high risk’ for the remainder of this pregnancy or what to expect in the future. I think it depends on what the next scan shows and the doctor’s opinion at that time. I do feel more at peace since our doctors are working together and checking everything out to be extra safe. I would much rather be safe than sorry.

My third labor and postpartum was HARD, and if this helps us be more prepared? Sign me up because I am so there.

Breastfeeding: When Your Best Intentions Fail

All I Wanted to Be Was a Mom {Expectations vs Reality}