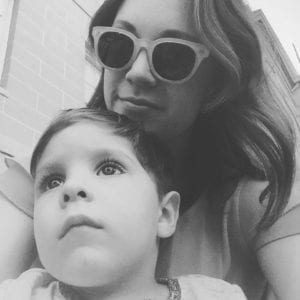 Life right now seems like it’s happening all at once. I’m so grateful for all that I have on my plate, but the kind of exhaustion that comes with being the parent of a three-year-old while pregnant on top of everything else isn’t something that I was completely prepared to handle. My emotions have been heightened, my fuse is often shorter, and last night it all came to a head.

Last night I came home late from a stressful day at work. The toddler wanted to eat, but he wouldn’t eat anything I offered. He wouldn’t accept the fact that candy is not an acceptable dinner, and he pitched a fit when I put his uneaten food back in the fridge and told him it was time to start getting ready for bed – a kicking and screaming, real tears kind of fit. I didn’t have time for stall tactics and negotiations – all I wanted to do was eat my dinner and go to bed early. The frustrations of the day and the season of my life bubbled up to the surface, and I lost it. I felt guilty as soon as it happened, but it did. I got red in the face and yelled at him, and you know what? His behavior didn’t get better in response to my frustration – it got worse, a lot worse.

After finally getting him to calm down, I apologized for yelling. I got him ready for bed, and I rocked him a little longer than normal as my small way of making up for it. He didn’t hold a grudge or push me away – in fact, he asked me to rock him even longer and he told me he needed me.

The next morning, I was getting ready for work and none of the clothes I put on my body fit. I’m in that awkward stage right now where I’m too big for my normal clothes, but not big enough for all my maternity clothes, which leaves me in a state of limbo when figuring out office-appropriate attire. I was a crying and complaining mess (thank you hormones), and the whole scene took place in front of my toddler.

At first he looked at me confused — my behavior looked much like his the night before, except I’m supposedly an emotionally well-adjusted thirty-something-year-old … not three. Instead of getting frustrated with me for my irrational outburst, he assumed the role that I provided for him so many times in the past. He wiped away my tears and told me not to cry. He comforted me in his precious three-year-old way and he brought me one of his toys to make it all better. He was patient, gentle, and understanding of my needs.

His compassion made me realize that I must be doing something right with this whole parenting thing, despite losing my temper with him the night before. If he had gotten upset with me because he didn’t have time to make me feel better, that certainly would have added fuel to my emotional fire.

I needed him in that moment, just like he needed me the night before, and I realized that regardless of how busy or stressed I am, I always need to be available for my son when he’s having difficulty expressing his wants or needs.

As his parent, it’s my job to teach him and guide him throughout his life … but I’m finding out that he has just as much to teach me about my own life.

I’m so grateful for his quiet lessons.

Why I Fired My OBGYN at 33 Weeks Pregnant