Writer’s Note :: I wrote this post at 4 weeks, 6 days postpartum. I thought I was adapting to life as a mom of 3 and no longer suffering from the anxious thoughts that plagued me in the early weeks. At the very least, I felt almost “myself” again. I could not have been more wrong. The week that followed (which I will share in a later post) revealed to me that I was in the grips of postpartum depression and anxiety. I am so thankful I reached out for help when I did. Sharing this journey is extremely out of my comfort zone and downright hard. But if I can reach one mom, then it will be worth it. I know I was only able to use my voice because of the women before me who shared their struggles. To those of you suffering: you are not alone. In reaching out I learned that more than half of my friends and family experienced this in some fashion. So speak up and get help. You deserve to not suffer.

I am currently 4 weeks, 6 days post-partum. My birth experience was pretty much exactly what I said I wanted. Except that it wasn’t. I feel like a fraud even allowing that thought to enter my head. I went to lamaze classes. Twice. I watched countless births on YouTube. I read just about any natural birth article I could get my hands on. I was very open about my desire for a natural and unmedicated birth. And then I had one. Here is where it gets tricky, after my birth I did not feel empowered. I am only starting to be impressed with myself recently, over 4 weeks after the fact. I am just as shocked that this is the way things played out. For my first VBAC {Vaginal birth after cesarean}, I felt euphoric moments after giving birth. Even my doctor remarked that I was “glowing” when she saw me 12 hours later. I was most definitely not glowing this time.

After the birth of my first born, I experienced a classic case of the “baby blues.” 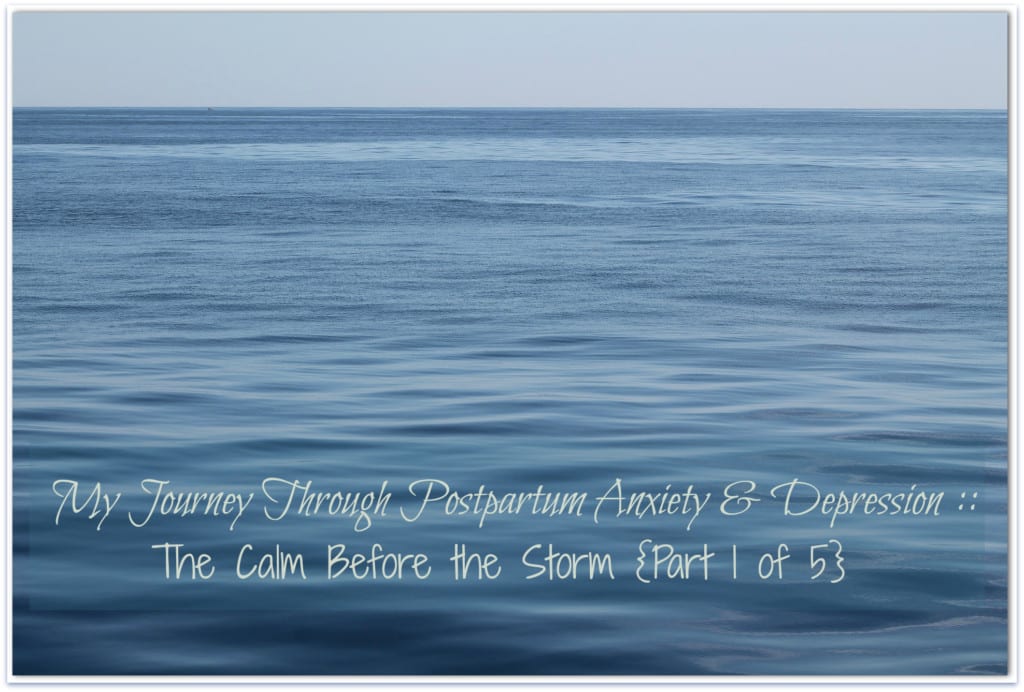 I wound up having a c-section. Not at all what I wanted. I cried every day for 6 weeks, although the severity and duration decreased daily. I felt overwhelmed, scared, anxious, but also excited and full of so much love. Overall, I think I would best describe my state as not feeling anything like myself. Gradually, I found myself in simple things like shaving my legs and going to the grocery alone with my baby. I know it sounds silly but in doing those routine things, I got back to myself. A different version, but nonetheless still me. I do believe that the c-section and recovery period greatly contributed to the way I felt.

After the birth of my second son, I had no indications of the slightest baby blues.

I felt incredibly strong in the hospital. I was elated to be able to walk to the bassinet and pick up my baby. I only recall crying once, when my first born came to meet his baby brother and even then, those were tears of joy. This feeling meant I could truly enjoy those early weeks and the precious snuggles that occur. Don’t get me wrong, I am not implying it was easy. I had a 1.5 year old and a newborn, and it was as tough as you imagine but my emotional state was strong and I had very little anxiety and worry.

Going into it for a third time, I expected to feel the way I felt after my second child.

I naively thought that I would bounce back as quickly after the birth of my third son. Boy, was I wrong. Immediately after I gave birth I knew something was different. I was holding my baby but couldn’t bond with him. I had just given birth pain-med free, and as a result, was stitched for my TWO second degree tears without the benefit of an epidural (by an intern no less, so it took twice as long). I was also receiving pitocin for over 3 hours to “help with the postpartum bleeding.” To say I was in pain is an understatement. I could not focus on my new precious and beautiful baby because I was literally shaking from the pain. During my 36-hour hospital stay, I couldn’t shake the nagging feeling that this time was different. I felt anxious and low but kept telling myself it was just the pain and lack of sleep and once I got home, it would get better.

It didn’t. My anxiety got worse. I googled “baby blues” and “postpartum depression.” My symptoms seemed more closely related to postpartum depression. I could not sleep. I would lie awake when the baby slept unable to turn my thoughts off :: “no use in falling asleep since he will wake up any minute to nurse” to the darker worrying thoughts about injury or death happening to my older children and my husband. I actually worked myself up into a panic when my husband wanted to take my older two out of the house. I envisioned them being hit by a car while riding their bikes or falling into the water when out on the boat. I pictured my husband being involved in an accident on his way home from work. I felt like an animal in the wild who wanted to take her cubs and mate deep into the cave where no danger existed. These thoughts came quickly and they would leave as fast. But the fact that I was having them was foreign to me and again, I no longer felt like myself.

I had no appetite, I ate small bites and no cravings. Within one week of giving birth, I was 6 pounds below my pre-pregnancy weight. My mom, who came to help the first week, remarked that she hadn’t seen me smile or laugh. I couldn’t watch television because I couldn’t focus. I only got out of the house a couple of times, otherwise, I was in a supine position or nursing the baby. There were times where I lay awake on the verge of a panic attack. Convinced that if I let these thoughts (which I knew were unhealthy) fester, a panic attack would follow. I knew these thoughts weren’t mine … they were due to hormones, but that didn’t stop them from terrifying me. The only time I felt at peace and had glimmers of  my prior state of mind was when I was breastfeeding. All of these “symptoms” peaked in the first week.

By week 3, the black clouds started to gray.

In between weeks 2 and 3, I resolved to get out of the house. To accompany my children to the pool and watch them swim. To join my husband and our older children to the school fair. While there, I felt “off.” But there were moments where I also felt like my former self. Doing those routine activities saved me. I gradually got out more, even going to the grocery. Something remarkable happened, I stopped having anxiety about bad things happening to the people I love. That was the biggest weight off my shoulders. Those thoughts are crippling, no matter if you realize they are ludicrous or not. And then all of a sudden, I noticed that I was sleeping when the baby slept, I was able to watch a television show, and my appetite came back. By week 4, I felt like me again. I was laughing and enjoying my time with my children. I recall distinctly looking into the eyes of my nursing rainbow baby and sobbing tears of pure joy that this baby I prayed for so long was in my arms.

I’ve tried to come up with the “why” for my experience the third time around. I have so many theories. Perhaps it was the Pitocin. Perhaps it is because my older children were so much older, and I was used to getting sleep for so long. Perhaps it is a combination. I will never know. What did help was giving myself grace. Reminding myself to take it one day at a time and that it does get better. I resolved that had things not improved by 6 weeks, I would seek professional help. What was strange is that my feelings were so much more severe this time yet much more short lived and abruptly over. I was more weepy for my first, but this felt more like postpartum depression to me. Although it was over almost as quickly as it began. For that I am grateful.

Did you struggle with the baby blues or post partum depression? What helped you overcome?

The Day I Decided To Stop Yelling