Like so many others these days, I’ve been cleaning out closets and doing my best to KonMari my life while we are still under quarantine. A few days ago, I found a box full of odds and ends from the bridal shower I threw my sister two summers ago. Since she’s been obsessed with the movie her entire life, it was only natural to give the shower a “Steel Magnolias” theme. (And not to toot my own horn or anything, but I knocked that ish out of the park! <toot, toot>)

The colors were pink and pink – I mean “blush and bashful” – and magnolia floral arrangements and rose gold framed movie quotes were everywhere. There was a beautiful mimosa bar with all the fixings and a tower of pale pink French macarons brushed with a flourish of rose gold, but the party’s pièce de résistance was most definitely a red velvet cake in the crazily realistic likeness of an armadillo. The shower was gorgeous (minus the mutilated armadillo cake) and my sister was glowing with elation. It was a wonderful day. 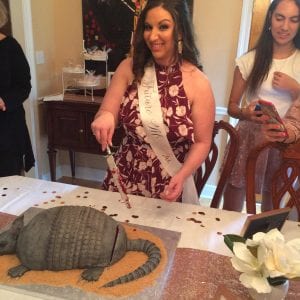 Remembering it made me miss parties and people and the way life was just nine weeks ago, and I felt a twinge of sadness.

One of the things I found in the box was the wrapper from a package of balloons I’d ordered from Etsy for the party. I’d gotten some of those giant round clear balloons filled with confetti and some other balloons (all in pink and pink and rose gold, of course) to place around the area where the bride-to-be would be opening her gifts. Although the planner in me had accounted for almost all contingencies, I had not counted on a big one: a helium shortage that would make those little tanks for parties scarce.

That meant the morning of the shower, I had to send my sweet husband (who I’d married just three months earlier) out on an errand to find a place that would fill the balloons and tie them off with ribbons. Lucky for him, his first stop was the Winn-Dixie a block and a half from our Mid-City apartment and the lady in the floral department was very accommodating. My husband made small talk with her as she filled the two dozen balloons with helium, which took nearly thirty minutes. (Now may be a good time to mention that he’d had a late night partying with his rugby team the night before and was nursing quite the hangover.) When she was finished, she gave him a ticket to take to the register and he made his way across the store beneath a comically large balloon bouquet. As he stood in the checkout line, there was the loud BANG! of a balloon popping and both the elderly lady in line ahead of him and the cashier screamed. The people at the surrounding checkout lanes were also startled and all stood staring at him.

And what they saw was a hungover 6’3” man holding a massive bunch of pastel pink balloons as white and rose gold confetti gently rained down on him in slow motion in the checkout aisle. Pure ridiculousness.

Since I wasn’t there with him, I didn’t get to see what the people at Winn-Dixie did that day. I only know about what happened because I noticed I was short one confetti-filled balloon when he returned, and I asked him if one had popped. He relayed the story and was particularly impressed that the cashier didn’t charge him for the popped balloon – possibly because she felt sorry for him, possibly because he so defeatedly asked if she had a broom he could use. Even though I wasn’t there, thinking of how he must’ve looked at that moment still makes me laugh uncontrollably two years later. In fact, it’s one of the memories that I go to when I need a good laugh because it never fails to elicit a good giggle.

And I’ve been going to it a lot these days.

There is just SO MUCH going on right now – and so much of it is stressful. Working from home and homeschooling and Zooming and drive-by partying have become our routine, or as routine as anything can be in these crazy days that blur into weeks that have now blurred into months. Each day we hear about the rollercoaster numbers of COVID-19 cases and when and how we may be able to start phasing into reopening the world around us. And who knew there would be sides to choose in a global pandemic?

But even on the blurriest, craziest days, we somehow still manage to laugh. Mel Brooks has a well-known quote that has come to mind a lot lately: “Humor is just another defense against the universe.”

What are some of your go-to pick-me-ups? 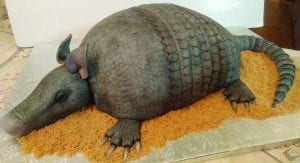 Get Your Groove Back :: Boy Band Concert Edition

TokTails:: Trying Out Some of TikTok’s Hottest Summer Drinks