Diagnosis: My Daughter Has Apraxia of Speech

According to a blog I refer to frequently, “Childhood Apraxia of Speech is a relatively uncommon speech disorder. It is a neurological disorder caused by problems with motor planning and programming of the movements necessary to produce speech … Children generally do not have problems knowing what they want to say. They can formulate the message in their mind and the muscles are capable of producing speech. The message just doesn’t travel from the brain to the mouth properly.”

If Evangeline had been given the diagnosis of childhood Apraxia of Speech at 21 months, which is when she began speech therapy, I would’ve been pretty upset. Having apraxia means a child has a slow and laborious road ahead of them to learn to speak. To think of my very sharp, perceptive child with great receptive language skills not being able to express herself with words for years to come would have been a lot to take in all at once. 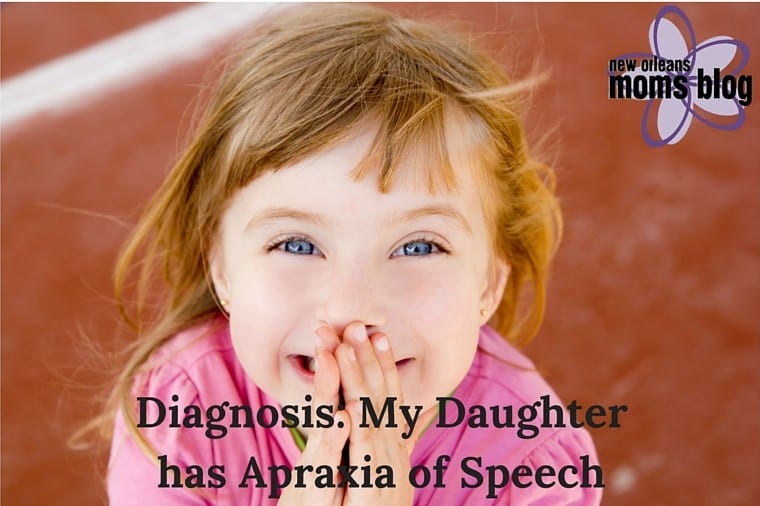 Since you can’t test for apraxia until a child has a certain number of words (usually around age three), by the time we got her diagnosis we’d suspected for a while that she had apraxia and had started helping her accordingly. We had moved her to a new school with a spectacular speech therapist on staff and also found out she has sensory processing and oral motor difficulties that were certainly not helping her speech (but that’s a whole other post). Having waited so long to give an official name to her speech troubles, instead of being upset when we received the apraxia test results, I felt relief.

I need to take a moment to say that when it comes to your family’s health, as I’ve written about before on the blog, I am a huge advocate for being proactive and seeking multiple opinions. If your kid is not hitting milestones or you think something just isn’t right, follow your maternal instinct. For speech issues, ignore comments like “My niece didn’t talk until she was four but nothing was wrong with her,” or “Boys are less verbal than girls.” Seek help. Get your kid tested. If needed, get him/her into speech therapy. Even our pediatrician fell into the camp of, “Let’s wait and see. She’ll talk any day now and when she does it will be paragraphs.” For a lot of kids, that’s simply not true.

So, another change we made while waiting for E’s apraxia test was to move to a more proactive pediatrician.

The best way to help kids with apraxia is to give them exposure; many opportunities daily to fill in a sentence or song with words or syllables; and practice practice practice. With a lot of work (speech therapy at school twice a week, plus her therapist coordinating with her teachers, and us working with her at home), we hope that in a few years, maybe by age six, E’s speech will catch up with her peers.

Terms that we’ve become familiar with are “jargoning” (talking that’s a lot of mumble jumble) and “automatic phrases” such as “I don’t know,” “Thanks Mama,” “Mine, this my Baby Gaga Bee,” (her name for her sister, Vivienne) and our favorite, “Ooooohhhhhhh, Gaga!”

While the use of sign language was very helpful early on, we eventually decided to stop teaching her additional sign language as a way to encourage more words. Instead we did binary choices, offering E either oatmeal or grits for breakfast for example. I would show her that one hand symbolizes oatmeal, the other grits, and she would either point, hold up the matching hand, or every once in a while, say the word.

Parenting a child with apraxia is plenty emotional. Having a kid who’s “different” can both play on your own insecurities and make you a stronger person. It can also change your parenting: we’re more protective of E than we’d like because we want to make sure she’s understood and that her needs are met.

Just before age three, at the time of her apraxia test, E was talking at a 16-month-old level. Using a combination of words, signs, hand gestures and dramatic facial expressions, she has worked hard to communicate with us. In 2016, as she’s neared age three and a half, she has begun to speak in sentences! It’s shocking and amazing. I can understand her most of the time, though my husband has less time with her so has more trouble understanding her. She doesn’t yet get particularly frustrated when not understood, though I do see a certain funny look on her face that tears my heart.

Her most repeated phrases are the clearest: “Gaga needs pants, Mommy.” (It’s true. Her little sister is often pants-less.); “I don’t need help anymore!” and “I want you to push me high!” She just started being able to ask “Why?” and while I know that the question can be trying for all parents to answer, for the moment, it makes me so proud, and hopeful.

With each huge step, we celebrate and push on to the next.

About her apraxia diagnosis, one practitioner wrote, “Evangeline is a delightful and inquisitive child, and wise beyond her years. She shouldn’t be defined by this. There’s so much more to her.” We couldn’t agree more!