On our refrigerator, there are masterpieces from our budding artists, a family calendar, pictures and not one reward chart. Actually, we have gone through the past three and half years without creating or implementing one as our kids have been potty trained, taught good behaviors and to pick up after themselves.

Before my oldest started potty training, I considered using a reward chart, but after much thought, I decided to give it a try without creating a girded poster size board. And we got through it! Actually, what it taught her was self-motivation and realizing she accomplished this feat (the most complicated to date) based on her own drive. She was enthusiastic about the process, sought our encouragement, and was content reenacting the song and dance routine we created after every successful trip. Her enthusiasm reminded me of one of Ralph Waldo Emerson’s most famous quote: “Nothing great was ever achieved without enthusiasm.” The thought of receiving, or more importantly expecting, a gift when she accomplished this feat was not even on the radar. 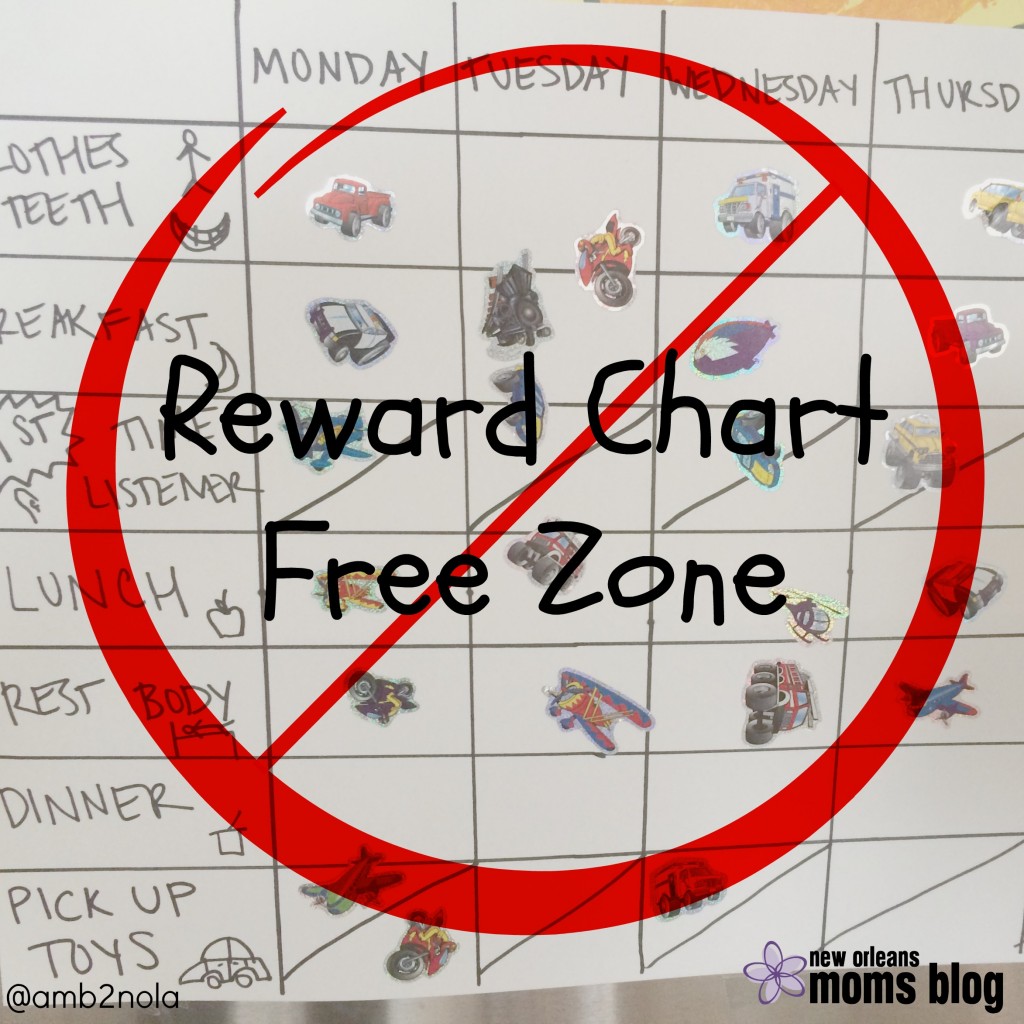 I respect the idea of the reward chart as a tool to assist some kids with difficult feats, such as potty training and as a stepping stone for achieving other goals and initializing good habits. However, if the chart is not enforced diligently, which at times is difficult while juggling life, the principle of the reward chart becomes lost. Instead of enhancing communication, for example helping and being involved with a child’s homework, we might depend on the chart as a shortcut. “Have you finished your homework? Then put a sticker on your chart.” Also, as I have seen children grow older, I have noticed that they are more inclined to do a chore they dislike, for example mowing the lawn, quickly and sloppily for the value of the reward. If we took away the incentive, would our child still mow the lawn without a contingency and forgo helping the family unit to watch television, for example? Instead of creating a solution, is the reward chart teaching that every action is to be rewarded? It seems that consistently enacting this tool will teach kids to expect something in return when they accomplish a task, whether it is a chore, academic goal, or good behavior. And what happens when a sticker is not enough? Will they seek toys, electronics, expensive clothes, or eventually money?

As a new school year begins, the reward chart has me thinking of another common location where it is located – the classroom. In a way, could the number of stickers next to your name define you as a “good” or “bad” kid? In retrospect, I recall by the time second grade came along, students were identified as one or the other. It seemed that those students who had constantly bad days in the first few years seemed to carry the stigma and a reputation based on how many round yellow happy faces followed their name. The reality is that, just like adults, kids have their off days, they go through stages, and really every day during those critical years are tough, and it is up to parents, family, and teachers to guide them through every stage of childhood. And when a child has consistent bad days, I would imagine viewing his lack of stickers would only remind him of what he has not accomplished, in lieu of starting each day fresh with a new start. I wonder now how many of those kids no longer tried to be “good” because they felt behind, overwhelmed, or on the teacher’s radar more so than another child. Could the reward chart actually be considered a punishment, a reminder of what not was accomplished instead of focusing on the student’s need? And, could the reward chart focus on bad behavior and stop rewarding good acts? Also if we do not reward and acknowledge every good feat, will a child feel they did something wrong?

Teaching my kids accountability, self fulfillment, and to find motivation within to make the right decisions and achieving their goals without expectations of a reward is a daily lesson I strive to teach our children. I want them to have a desire to do their homework because it will help them get better grades and fulfill their future life goals. I want them to desire to help around the house as a sign of respect to their family members and to help our family unit as a whole. I want them to desire to help their neighbor, for example walking an elderly neighbor’s dog, because it gives them an internal satisfaction to help others, and not because they expect a compensation.

Do you use a reward chart in your household? Why or why not?

Space :: How Much Does Your Family Need?