My son just turned two years old. He is currently the star of “The Toddler Show.” And he will not be ignored.

I come from a family where 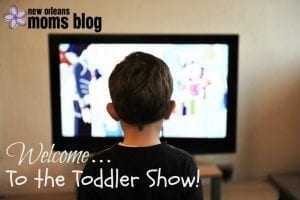 children are the stars. The adults are happy most days to sit around and watch the children play, so the kids in my family are used to being watched and adored. ALL. OF. THE. TIME. My son is no different.

Independent playtime is a fabulous concept, but my son has absolutely no interest in it. He loves to build huge towers with his building blocks. He loves to play with his wooden train set. He loves to jump on the trampoline. He loves to color. (Well, he loves to scratch wildly at the drawing paper with crayons.) But he ONLY loves to do these things if I am watching and commenting.

Sometimes I think my son must fear that he is the proverbial tree in the forest. If no one is there to comment on the amazing things he is doing, then maybe they aren’t actually happening. Even watching movies has become a toddler spectator sport. A few months ago when I turned on a movie, he would be enthralled and I could get some chores done around the house. Now when I turn on a movie, I hear, “Mama, come watch! Mama, come see, I laughing!”

Now don’t get me wrong. My favorite thing in the world to do, hands down, is watch my son. I have everything about this child memorized from staring at him so adoringly – from the noises he makes when he is concentrating on something to the way he squints his eyes and smiles when he is about to do something he knows I don’t want him to do to the way his little calf muscles flex when he is climbing things. But sometimes I need a break. Sometimes I need to get things accomplished. In those times, it would be great if my son were content to play on his own for a little while.

I know that time moves quickly, and in a few years, I will be longing for the days when my son wants me to be his audience around the clock. When he is a moody preteen who would rather play video games online with his friends across town, I’m sure I will be knocking on his door asking if he wants to play Jenga with me. When he is a teenager and wants to go to the movies with his crush, I’m sure I will be wishing he’d want to go to the movies with me instead. When he is grown and moves out of the house, I know I will wonder what he is doing all of the time and think fondly about the days when all he wanted was for me to watch him jump on the trampoline.

Ugh. Just typing about a time when he might not want me around all of the time has me bawling crying. Okay, I take back everything I was complaining about earlier. I don’t need a break. I don’t need to get chores done. I need to go watch my son build a tower.

The Thing No One Tells You About Potty Training

To The Person Who Cut Me In The Carpool Line