In talking with a fellow mother of a fire truck-obsessed little boy, I was told this story:

“I was driving and my mother-in-law was in the passenger seat. My husband and little boys were in the backseat. We were at the beach and wanted to check out the fire station. I pulled in so the boys could sit and take stock of the fire engines. We had been parked for a few minutes and the group of firemen outside started giving us curious glances. So my mother-in-law with her southern accent rolls down the window and says “Oh don’t worry, it’s just that we LOVE firemen.” At that point I realize that our tinted windows were hiding the little boys in the backseat!” 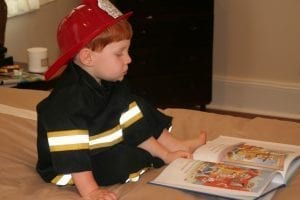 I loved that story! You see, at my house, it’s all firemen all the time. A brief history: Jack is one of those boys that is innately fascinated with trucks. I don’t remember exactly when the fire truck fetish started, but I think it had something to do with how close we lived to the Magazine Street Fire Station. “Fire truck” was one of Jack’s earlier words, and he said it for a good six months replacing /tr/ with /f/. Our friends thought this was just hilarious and loved to get our precious child to talk fire *ucks.

October 2011: Jack was a fireman for Halloween. 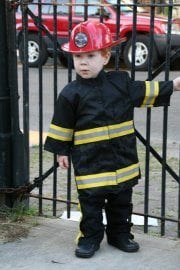 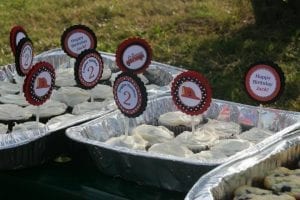 Spring 2012: Jack discovers anything can be a fire truck. He starts building fire trucks out of LEGOs. This soon expands to fire stations. We learn that Jack will be content ANYWHERE as long as we bring the bag of LEGOs. 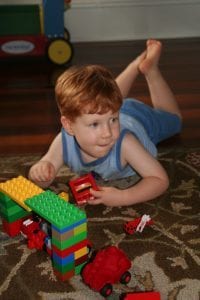 Summer 2012: Jack discovers the game of playing fire man. The game evolves through his own imagination. To play: 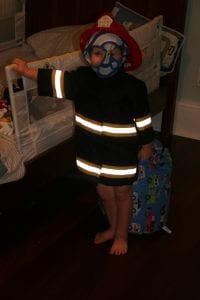 October 2012: We are now supplementing our impressive fire truck book collection with the Latter Library’s juvenile non-fiction section, and Jack plans to be a fireman again for Halloween. He will wear last year’s costume, but this Halloween promises to be way more fun. Why, you ask? Because Jack will have a sidekick: baby firewoman Cora. (No joke, costume purchased on zulily this week!)

Do you love firemen too? 🙂