Sassipotimus is the name we call my three-year-old daughter when she is taken over by some crazed alter-ego. The sassipotimus has little resemblance to my normally sweet little girl. While on the outside they may look the same, on the contrary, her personality has been mutated to a child that is sassy, difficult and irrational. Whoever said that the twos are terrible did not have a three-year-old. In our house, three is by far worse than two.

Annelise is normally very polite, adaptable and easily amused. She could entertain herself in an empty room. But you never know when the sassipotimus will strike. It can be at the grocery, church or on a playdate. Everything will be fine then, boom. The hands are on the hips, there is attitude and mommy is about to pull her hair out. 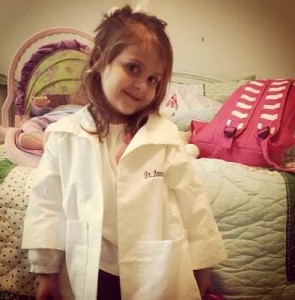 We do our best to put our foot down. We have a no tolerance policy for the sassipotimus. We combat the monster head on by holding firm, setting barriers and not backing down from the rules. But the sassipotimus is ruthless. In one recent instance when I told her not to do something she quickly replied back, “Are you going to make me go to my room?” Ah! The sassipotimus called my threat. OMG she is three!

I have to do my best to maintain my composure because if she sees that it gets to me, whether I laugh at her or get mad, then she wins.

Don’t get me wrong; the sassipotimus is smart. She knows when to strike. Never at school where she risks not getting her stamp and losing a trip to the goodie box. Usually it is in front of her grandparents who are going to let her get her way anyway. Which starts the battle of wills. Or, it is in public where I can’t really put her in time out, send her to her room or cut off toys or TV.

Rationalizing with the sassipotimus is a challenge. She is an extremely independent, strong willed little girl. Of course, if that is channeled in the right direction those are great qualities, but if we let them go it could make for a disaster

We need to get the sassipotimus under control now because what will thirteen look like if we don’t?! Ugh, I can’t think about that because I will have nightmares.

Right now we are on the threshold of sass and full blown bratiness. But our battle will rage on because I refuse to lose my sweet baby girl to the sassipotimus.

Any tips for battling a Sassipotimus?

Gift Ideas Under $20 You Can Still Amazon Prime