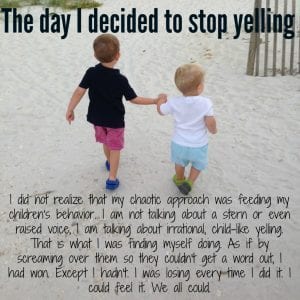 I am rarely accused of being loud. In fact, my husband, a Seinfeld fanatic, often refers to me as a low-talker. This part of my personality carried over into being a mother as well. When Mark was my only child, I rarely raised my voice. Not to say that I was not stern, because I certainly was, but yelling was not something I as comfortable with. Then I had a second baby, and for some period of time, I remained calm and did not often raise my voice. Even family members commented on how calm I seemed and how that seemed to positively affect my children’s behavior. But then something happened. My children grew a little older, and they began to argue with me (I know Mom, karma). My youngest began having temper tantrums which I never experienced with my first.

And that is when I started to raise my voice more often.

At first, that is how it started, just a little raised voice. And it worked at first. Let me take a step back and say that I do not blame my children’s behavior for my actions. Not at all. But let’s be honest, toddlers are super hard, and it was around this time that we decided I would stay at home with my kids all summer … no camp, no Mother’s Day Out … just me and them. I am so grateful that I had that opportunity, but at the same time, full disclosure here, it was one of the hardest things I have ever done. Anyway, the temper tantrums started from my 14 month old and my 2.5 year old started … well, he started being an almost 3 year old. #threenager. it’s real.

My raised voice quickly elevated into full out screaming.

I read books about dealing with these ages, and although the principles made complete and total sense, I could not put them into action. Or I would for a couple days, and then I would get lazy and resort to yelling at my kids to get what I want. Essentially, I was throwing the adult version of a temper tantrum. This continued for months until one afternoon, my three year old kept flicking the one light switch he could reach on and off. After about the 3rd time of saying to “stop,” I said sternly,  “Mark, if you do not stop that I am going to get very mad.” He innocently turned to me and said “and then you will scream.”

I felt like I had been punched in the gut.

I was that mom, the one who yelled at her kids. And that is how they saw me. Jack doesn’t really talk, but I’m sure he would have agreed with big brother. I explored the conversation a little more:

That’s it. Then he was hugging me no less than 5 minutes later. See, I know he is forgiving now, but I also know that if I keep this behavior up, I will lose my children. They will not forgive as easily, and they will not want to be around me. I want them to want to spend time with me when they are older and to like who I am.

So I made a vow that afternoon.

I did a lot of self-reflection that night in bed and woke up the next morning with a new purpose. I was faced with at least 2 temper tantrums from my now 19 month old and my 3 year old argued back on several occasions. But I kept my cool. I did not give in; consequences were still had, but I did so without ever raising my voice. And something remarkable happened, the time of those tantrums and arguing sessions were cut in half. My children were also calmer because I was. I know some of you are thinking “duh?!” but it was a light bulb moment for me because the effect was instantaneous. I have not come up with some revolutionary parenting strategy except that for me, it kind of was. I did not realize that my chaotic approach was feeding my children’s behavior. I am not talking about a stern or even raised voice, I am talking about irrational, child-like yelling. That is what I was finding myself doing. As if by screaming over them so they couldn’t get a word out, I had won. Except I hadn’t. I was losing every time I did it. I could feel it. We all could. I do not expect this to be easy as I have already created a habit within myself and my children are at a particularly difficult age. But I hope I keep trying, for my entire family’s sake.

Am I alone here, or do you find yourself yelling at your toddlers more often than you would like?

Being calm when you really just want to scream