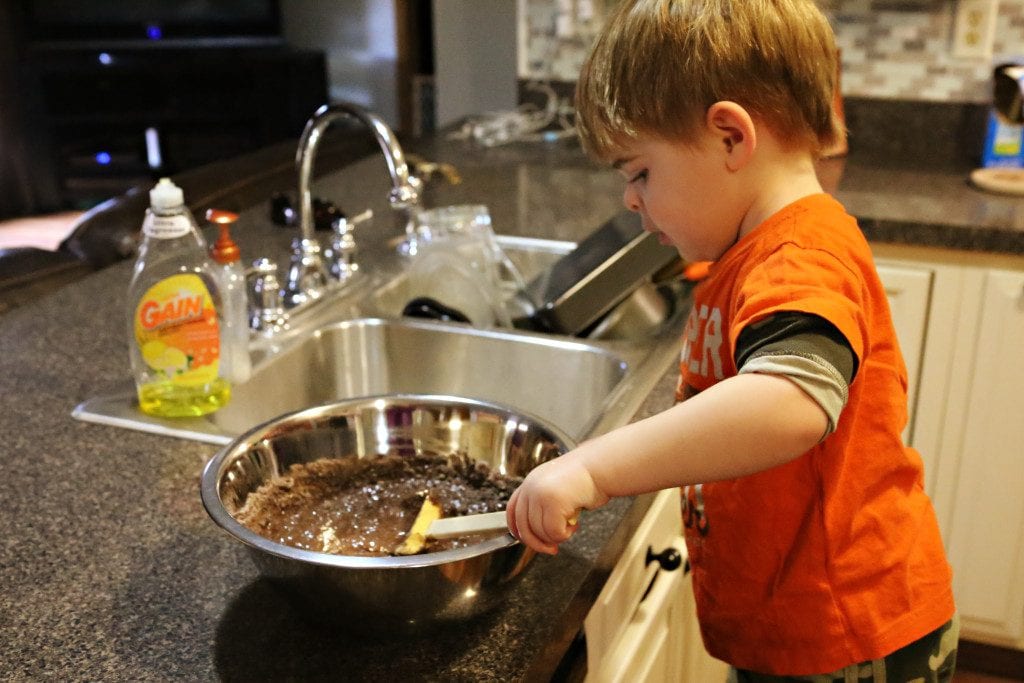 When I was pregnant with Andrew, I had these grand ideas of how I would do things with him. In my mind, we would do fun things like bake cookies, fold laundry, and work in the garden together, all smiles and no mess.

That didn’t happen. Not at first, anyway.

Because it took me a long time to get pregnant with Andrew, I had quite bit of time to ponder what kinds of these kinds of moments would be like. This long journey to motherhood caused me to romanticize motherhood into a non-existent fantasy world. I had all of these “picture perfect” moments in my head for these everyday, mundane things like laundry, cooking, and yard work.

Of course, once Andrew was born, things changed. My organized Type “A” personality that required control did not lend itself to these perfect little moments. Instead of  bringing me joy, just the idea of trying to bake cookies with my then 18 month old set me into a panic because I would start thinking of the mess he would make and how much more I would have to clean. Or I would flip out at the idea that he would try to eat raw eggs or something worse.

One day, as I was weeding flower beds and Scott cut the grass, Andrew pulled out his play lawn mower and started to follow Scott, row by row, haphazardly. He stayed out of the way of the lawnmower, but he followed in his daddy’s footsteps, and it was at that moment I realized that it was far better to let him make the mess or follow along because he felt was being a grown up, feeling accomplished, and doing something important by helping his dad.

About a month or so after that, it was time to do all of our plantings in the flower beds. Instead of being anxious at 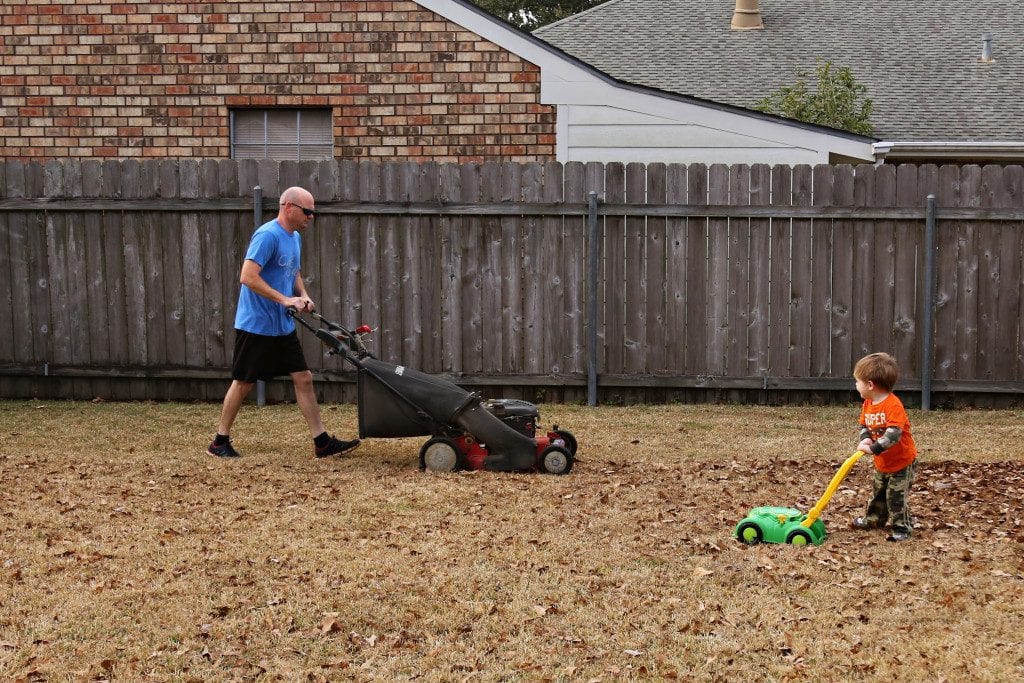 the idea of him getting dirty, or making a mess, I let go of my anxieties. I gave him a trowel and a bucket and let him dig in the dirt. Instead of letting my worries get the best of me, I just let it be. He helped by planting some seeds of his own and watered them. While the seeds weren’t really in the ground that well and he practically dumped the water on them, it didn’t matter because he carried a broad smile on his face because he was doing something “grown-up.” From there, we created his own little garden, and every day he wanted to check on how his plants were doing. Seeing the look of pride on his face completely washed out any sense of anxiety I had previously about him getting dirty or making a mess. Instead, I also beamed with pride.

As time has gone on, I have adapted all of my chores to include Andrew instead of trying to control every situation. Now, I embrace his “help” whenever doing chores. In fact, he has his own chores! When doing laundry, he helps me move the wet laundry into the dryer, he puts the dryer sheet in and shuts the door. At first, I would get frustrated with him because he would shut the door as soon as I would try to get more laundry in the dryer. But with a little patience and encouragement, now these tasks are a way to build our relationship, and more importantly, encourage Andrew to be self sufficient. While it’s not groundbreaking, seeing the smile on his face is worth it. He also now puts his plate and silverware in the sink, he weeds and fertilizes the flower beds, and he mows the lawn and “blow-dries” with his Dad. (He calls the leaf blower a blowdryer.) When he does some of these tasks, we reward him with “Disney Dollars” (play money that he can save to buy something on our upcoming trip to Disney World). 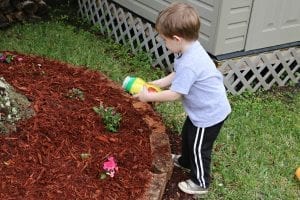 These days, I also love cooking together. I don’t let him do too much near the hot stove; however, he loves to plop cookies on the cookie sheet, stir up noodles with cheese, or break off the ends of asparagus. When I get home from grocery shopping, his favorite thing to do is help me unload the groceries. I used to get so frustrated with him when he would start digging in the bags, thinking that he was just making a mess. It was one day when I saw him start trying to put everything in the refrigerator, that I realized he was just trying to help.

As a working mother, I often stress out over the fact that there just isn’t enough time in the day. I feel like between my daily commute, work, and then housekeeping duties that I NEED help. What I failed to notice for the longest time was that my help was right there, offering up his tiny little hands to carry that bag of bread, pull out some weeds, or shut that dryer door for me. For him, these were not a chore, but rather, his way of expressing his love by offering his help.

A year ago, the idea of my son helping me in the kitchen put me in a state of fear and panic, and these days, it is one of those little things I look forward to the most. It may take double the time, but it is also a great reminder that during my own childhood, the things I remember most fondly are not the toys I received or big birthday parties. No, the things I remember most are helping my mom pluck snap beans off the vine in the garden, or helping my dad wash the car on Sunday afternoon and feeling a sense of pride because I was there to help them and be with my parents. I can only hope that by doing these things with Andrew now, he will feel the same.

Do you allow your children to help with the chores around the house?