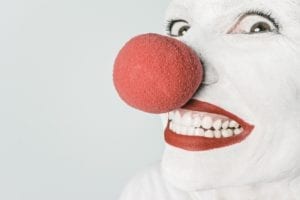 There are NO Surprises

The other day, my neighbor was driving through the city when he observed an altercation between a man and three fast-food-chain employees (chain to remain anonymous). It was pretty bad, so he dialed 911. While on the phone with emergency services, he looks up and sees a house has caught fire and gets out to help. He posted about it on Facebook, and I sat there reading it thinking, “That’s New Orleans for you – predictably unpredictable … How very like parenting. You start to defuse one thing, and then something catches fire. What a circus.” (No one was home or injured in the fire. I did not mean that flippantly).OLA

I am a parent of a Three Ring Circus, ages 8, 6, and 4.5. The amount of predictable chaos that happens on a daily basis in our home and around New Orleans with these marginally tame animals is unquantifiable. Nothing surprises me anymore. NOTHING. On top of the usual graffiti on the walls and furniture, hidden candy and banana stashes, iPad hacking (no passcode is safe enough), and chronic one-sock loss, here are a few things that have gone on in our Big Top …

The Circus of Predictable Chaos

When our middle child was two, he left our house (on Hillary and St. Charles) as I was buckling his baby sister into the stroller and went to the bakery for “donuts and a juice box.” He crossed St. Charles Avenue, went up two blocks and then over two blocks before an adult stopped him – the SEVENTH adult on the route he took. Why the first six didn’t see fit to halt an unaccompanied two year old is beyond me. I still can’t forgive the Green Machine juice guy who was ON THE CORNER and said, “Was that your little boy? I just WATCHED him cross St. Charles.” True story. And I’ve actually had someone tell this story about a little kid crossing St. Charles to me. The dad was literally starstruck when I told him that was my son and introduced him to Weeks (the boy, the myth, the legend).

Two years ago, my youngest (who was 2.5 then) fell off the breakfast barstool that she was standing on. Those things should come with seatbelts. When I went to put her hair in pigtails, the “jelly” that I was fussing at her about for getting in her hair turned out to be a whole lot of blood. Apparently, she had landed on the fork she was holding at the time. Two staples in the back of her head for that incident. The ER doctor let Weeks help work the staple gun.

In June of last year, my 8-year-old (who was 7.5 at the time) dropped a margarita machine on the fourth toe of her left foot after a pool party. It bloomed like a flower, and the ER doctor had to sew the bloom back together to make it a little toe bud again. Thirteen stitches in one toe. We still can’t figure out how that machine landed on ONE pedi-digit or why she was trying to “help” get the machine out of the van and into the house. No adult was present at the time of the disastrous drop. We were lucky that a friend of ours is an ER doctor and called ahead to let a colleague know we were coming. Pretty sure DCF was never going to believe us if that one was reported.

And the shenanigans that the children get up to (or end up in) are often compounded by the wackiness of New Orleans and are no fault of their own. During Mardi Gras last year, I was atop the ladder at Endymion with three children in the seat shouting for beads with arms waving when suddenly the front left leg started sinking. Thanks to my friend Jessica’s dad and his buddies, no child or adult hit the ground. Turns out the ladder leg split. We had a good 6-7 years with that wooden ladder. Our new one is aluminum.

Confession: the children come by it naturally. My husband and I have a list of incidents from college until now that we could write into a book. Sometimes, we’re asking for it (yes, you broke your big toe doing the snake in your slick tuxedo shoes at that wedding), but most times, our guardian angels go on break, and we just really bite it.

Last year, my husband went out for a run behind my parents’ house in North Mississippi. They live out in the country. He wasn’t even gone thirty minutes and was back with knees that looked like they’d been hit with shrapnel. He had run face first into a giant spider web and gone flailing to the graveled ground knees first. In my imagination, I can hear him shrieking like a girl (which is exactly what he sounded like on our first date when confronted with a cockroach that was across the room). It took something like 2 weeks before he could wear pants without his knees oozing through the fabric. Gross.

Then, this year on the first Sunday of Mardi Gras, we were cooking dinner and wrestling around in the kitchen like Karate Kid – wax on, wax off. The kids were egging us on. All fun and games. He jabbed, and I “waxed off” with my right arm. I jabbed with my left, and he waxed UP. With his knee. Left radius = broken. I’m still wearing the cast right now. Eight weeks of this for one moment of goofing around.

The Big Top is a Happy Home

I can’t stop thinking about my neighbor’s post and how true to life that situation was. As soon as you think you’ve got one thing under control, something else will pop up. It may be big. It may be small. The one sure thing is that you can’t take your eyes off of the show for a minute. No matter how big or small our crazy circus “performances” are, though, our Big Top is a happy home – even with the unpredictability and chaos of each day/week/month. We love each other, help each other, and more often than not, are having a really good time. It’s never dull. And we have some great stories to share.

Advice for Graduating Seniors: A Letter to My Niece