It had been a very long day. I was grumpy. The kids were grumpy. My husband was exhausted after a marathon training session, and I was about to leave them all for a much needed girl’s dinner with family. My husband was eating leftovers. I quickly scrambled eggs for my one year old daughter and gave my three year old son a peanut butter sandwich with a “no thank you” bite of egg on the side. My son immediately picked up the piece of egg without even considering eating it and tossed it off of his plate. “I hate eggs. They are gross,” he declared. Normally, I would have lectured him about table manners and not forced the issue, but today was different. I dug my heels in, ready to battle. 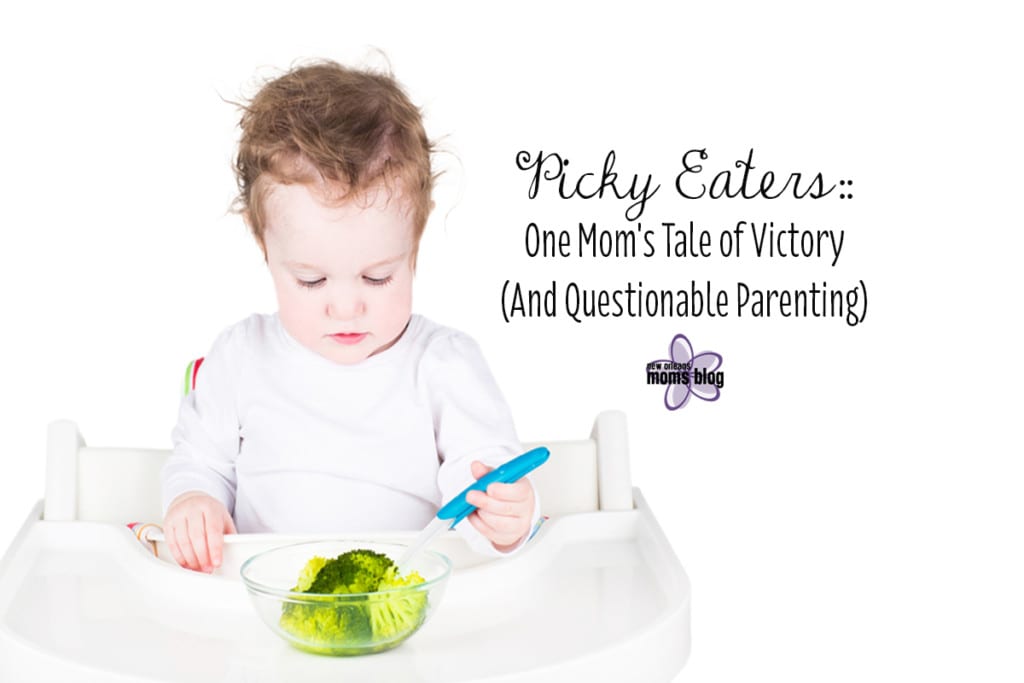 Portrait of a Picky Eater

My son was not born a picky eater. When he first started eating solid foods, he gobbled up beets, sweet potatoes, avocado – you name it. Unfortunately, somewhere along the way, he turned into a picky eater. Maybe it is his way of asserting control? Maybe I made missteps along the way? Whatever the reason, he lives mainly off of peanut butter sandwiches, dry pasta, steak, and apples. Like the mother of many toddlers out there, meal time is not the most relaxing part of my day. It is a constant battle with my son to get him to eat what is on his plate – even the things he loves most of the time (Geez, if only I had a problem forcing down pasta and steak…).

I would like to say that I am one of the strong willed parents who can send their children to bed without dinner to teach them a lesson, but I am not. It’s mainly because this mama likes her sleep. I know if my son does not eat dinner, he will either awaken at 4:00 am complaining of a growling tummy or stall bedtime by saying he’s too hungry to sleep. In fact, the only time he will voluntarily eat vegetables is when I tell him that if he is truly too hungry to sleep he can have vegetables. He inevitably calls my bluff. Then I’m stuck making broccoli at 10:30 pm and watching him eat it at a snail’s pace when I really just want to be drinking wine and watching the Housewives.

The Battle of The Scrambled Egg

When my son tossed the egg, I told him to pick it up and take a bite. I told him he might really like eggs. He refused. Normally, I would have let it go, but I couldn’t pull an Elsa that night. I knew this child would like eggs. I just knew it. I picked up the tiniest piece of egg and stuck it in his mouth. He immediately grabbed it out of his mouth and threw it back onto the table. I picked it up. My son refused to open his mouth, so I pinched his nose until he had to open his mouth. Then I stuck the egg in his mouth and told him if he did not eat it, I would continue to put it in his mouth until he swallowed a bite. He reluctantly started chewing. Then he swallowed.

He looked at me.

Some people might think force-feeding your child a bite of eggs is questionable parenting. (If my son had been flailing or fighting it, I would not have attempted it for fear that he would choke.) After hearing horror stories from friends whose kids vomited after they attempted forcing their kids to eat something, I wouldn’t highly recommend it; however, I will say that this instance of “questionable” parenting worked for us. Every day for over a week, my son has asked me to make him eggs. Every time he eats them he says how yummy they are. Now he even makes the eggs with me, so it’s a fun activity as well as a protein rich meal.

The Saints won the Superbowl. The Cubs won the World Series. I won the Battle of The Scrambled Egg. Glorious, glorious victory, you feel so good.

Do you have a picky eater? Tell us about the battles you’ve won (and lost)!

Girl Vs. Grill: Top 10 Items For Your Summer BBQ Available...