Have you ever been to one of those stores where it seems like they purposely put everything breakable within a preschooler’s reach?

I mean, seriously, who would think to put a bunch of delicate glass figurines at eye-level for someone under four-feet-tall? Sometimes I wonder if it’s done so a mom has to buy something, thanks to the “you break it, you buy it” concept.

A while ago, I came across an interesting concept called the “One Finger Rule.” 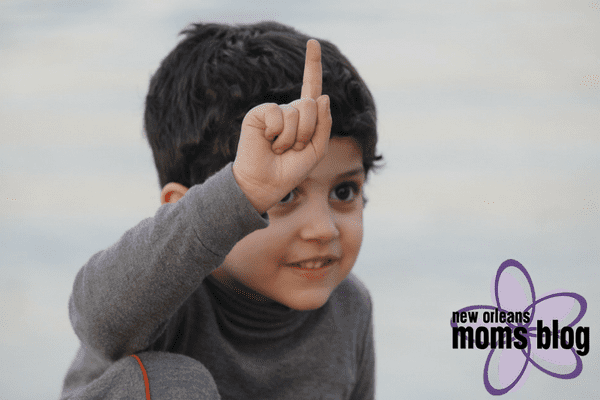 Basically, your preschooler is allowed to touch anything breakable, as long as it is with one finger. The thinking is if a preschooler is told “don’t touch anything,” they’re going to impulsively touch ALL the things. But, if you allow them to touch delicate things with just one finger, they’ll have a little more self control. An added bonus is they learn how to approach things that are fragile.

I’ll admit, the first time I read about it I thought it was a little risky. I just imagined my four year old pushing something breakable, with one finger, straight onto the floor. But then a situation forced me into trying it.

It was a Christmas dream, for me and my four-year-old. I carefully knelt down to set the ground rules (making eye contact emphasizes the importance, right?). “Ok, there are a lot of breakable things in here,” I told my son, glancing sideways at the clerk who seemed as nervous as me. “So, here’s the rule. If something is glass or looks breakable, you can touch it. BUT you can only touch it with ONE finger.” I held up my one index finger to prove my point. He nodded and held up his index finger, which made me feel a little better. We started slowly down the cramped aisles, as I semi-manically repeated “one finger, one finger.”

“Mom! This is breakable! I’m going to touch it with ONE finger!”

I smiled encouragingly at my son as he carefully touched a small snowman figurine. He just barely touched it, but was so excited that you would have thought I told him we were going to buy it. “Look! It didn’t break!” Thank God.

The rest of our trip to the store went the same. “Is this breakable? Can I touch it? One finger, right?” It was cute and successful, but toward the end it got a little out of hand. “Mom, can you pick me up? I want to touch that ornament WAY UP THERE!” Well, we didn’t break anything, but I also wouldn’t recommend taking your small child into a store crammed with expensive Christmas trinkets either (for sanity reasons).

My verdict on the “One Finger Rule” is it works, almost too well, because your preschooler will want to gently touch ALL the breakable things.

Mom Life: There’s an App for That!