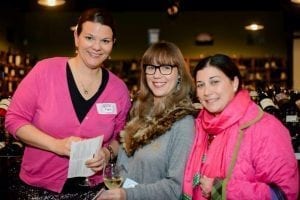 I moved to New Orleans in 2008, not knowing anyone but my husband. I met a few of his co-workers, but I had no friends or family to hang out with. I quickly found out the difficulty of making friends in New Orleans. I was considered an outsider because I had no idea why people were asking me, “Where did you go to school?” I mean why would anyone care where I went to high school? But in New Orleans this question is standard fare. It helps place you in a certain clique. I felt left out because I didn’t have a proper answer about high school and I didn’t know anyone. I felt like I didn’t fit in. I was a Jersey girl trying to adapt to a Southern city with totally different customs, traditions and way of life. It took a while, but I soon found a job and some friends who accepted me even though I wasn’t a native. Then I had a baby. Navigating new motherhood is hard enough. But then at some point you realize you actually never left high school and the cliquishness that existed then is still around now.

I found out quickly that when I went back to work, I would never be able to participate in all the awesome activities and music classes that started at 10:00am. I tried to join a playgroup but realized that they only met during the hours I was at work. I asked about weekend meet-ups, but I was dismissed. The Parenting Center was also for the stay-at-home crowd. I tried making mom friends at the park, but everyone already seemed to know each other. Here I was, feeling like the new girl in high school. It wasn’t until I met another working mom, who also happened to live a block away and had a son in my daughter’s class, that I made another mom friend. Alas, this was short-lived as she recently moved away. We remain friends, and my daughter still asks for, “my Max.” But it means that I have one less friend in town.

When my daughter turned 2 she started in a new school. I was just as excited as she was about the opportunity to meet new friends. But once again, this felt like breaking into a clique. I was not a legacy at this school, and I wasn’t from this city. I also work full-time, which makes me less accessible than if I was home all day and able to schedule after school activities. I learned that you become friends with the parents of  your child’s friends. Thankfully, the majority of these ladies also worked. Playdates were scheduled for Friday evenings or the weekend. We went out for ladies nights. We Facebook friended each other. We texted and talked and became a group. I’m not sure at what point it was, but I 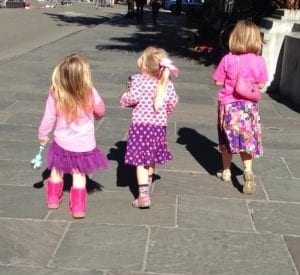 realized I was part of a clique. There were people being left out, and I didn’t want people to intentionally be excluded. I decided to reach out to other moms I didn’t know as well and make an effort to include them in activities. Some were open to this gesture but others were not as receptive. And, that is alright.

These days, I find myself hanging out with a nice group of ladies. Some are from my daughter’s school. Others are from the neighborhood. There are friends I see only at the park, where our children have played together since they were small. I am still not a true New Orleanian, as I will never have a good answer as to where I went to school, and I probably won’t ever join the Junior League (just not my thing). But with my friends, we have started some great traditions. Friday nights in the Spring are for playing in the backyard with neighbors while the moms have a chance to catch up. Random afternoons off mean I can take both kids to the Parenting Center with some other moms from my daughter’s school. There are times where I still feel left out of the “cool mom” clique. But I’m confident in the network of friends that I’ve built. And if someone doesn’t think I am good enough for their group, then that is their loss.

Did you move to New Orleans? Do you find it hard to make friends?

Relying On Screens To Get Through Summer